India Votes — and What It Might Mean for the United States 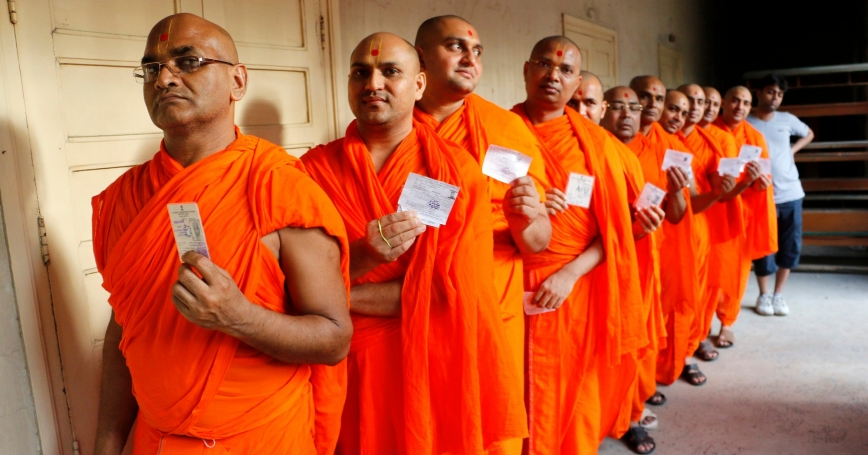 India is in the midst of its national elections, a massive exercise involving 825 million voters that takes weeks to complete. When the votes are counted, it is expected that the Bharatiya Janata Party (BJP) will emerge as the winner and be tasked with forming a new government. How will India change, and how will relations with the United States develop under a BJP-led government?

The BJP's candidate for prime minister is Narendra Modi, currently chief minister of Gujarat. As one of that state's longest-serving chief ministers, Modi's record has been closely inspected. Many impartial observers praise his growth record but criticize him for being anti-poor and anti-minority. On the latter point, he has been accused of violating religious freedom by the U.S. government, which has refused to grant him a visa since 2005 for his alleged role in suppressing Christian and Muslim rights in Gujarat.

Modi's election campaign projects him in a different light on social issues while stressing his record on development. Contrary to his anti-minority campaigns in Gujarat state elections, he has sought to reassure minorities as the prime ministerial candidate. He has addressed Muslim audiences and remarked that he would like Muslims to carry a “Quran in one hand and a computer in the other.” Critics say India's Muslims, several million of whom reside in Gujarat, are unlikely to be impressed. The real target of such reformist comments is likely the country's “moderate majority” Hindu population on which the election truly depends.

Votes for the BJP will probably be as much votes against the incumbent Congress party as votes for Modi. India's Congress, whose pro-business and pro-poor stance has been a winning combination for the past 10 years, has also built a staggering record of corruption. This, some observers say, explains how a country with an average growth rate of nearly 8 percent over the past decade is still unable to provide most of its citizens with basic health, education and other social services. An adept campaigner, Modi has succeeded in making his anti-corruption stance the centerpiece of his campaign and showcasing his state as one with good civic infrastructure, particularly power and roads.

Whether or not Modi has changed his positions, he will still likely be forced to moderate his stance on social issues if elected prime minister. He will not have the luxury of five years between elections as he did in Gujarat. This five-year window allowed Modi to put behind him events that alienated minorities (the horrifying anti-Muslim riots occurred less than six months into his first term) and polarized the Hindu population by focusing on growth in the latter part of his term. But as prime minister, Modi will have to calculate how his agenda will affect BJP candidates in state elections, which take place every year. Next up is Maharashtra, a key state for the party, which will hold elections in late 2014. Maharashtra is a socially progressive state where a BJP coalition ally, the Shiv Sena, is a leading opponent of the incumbent Congress party. Any strong moves by Modi to promote an anti-minority agenda as prime minister would likely hurt the Shiv Sena's electoral prospects. So, Modi is likely to double down on his growth agenda — which is what the electorate wants.

For the United States, India has been a disappointment since the two countries signed the “Next Steps in Strategic Partnership” in 2004. The United States then saw an economically strong India as competing with China for political influence in Asia and Africa. Grand democratic alliances among Japan, Australia and India were also envisioned as part of the strategy to manage China. Instead, India has been largely irrelevant. Its economy has lacked China's resilience in the face of global financial and economic crises. Instead of being Asia's democratic champion, it continues to struggle to build geopolitical relations in South Asia (its backyard, so to speak) and Southeast, Northeast and Central Asia, Africa and the Middle East. Could Modi succeed where current Prime Minister Manmohan Singh could not?

Some observers have argued that India under Modi would be more inward-looking than under the incumbent Singh, given the BJP's opposition to foreign investment in retail and Modi's own close connections to domestic-focused business groups. However, this may not be an entirely accurate view. In Gujarat, Modi worked hard to attract foreign businesses through the state's “Vibrant Gujarat” campaigns and other initiatives. It is likely that he would cultivate Western businesses as prime minister, something that could help improve U.S.-India relations.

Less is known about what a Modi foreign policy toward Asia and Africa might look like. The BJP was in power in New Delhi between 1998 and 2004, when many of the country's keystone foreign initiatives began, including friendly relations with the United States. However, Modi has distanced himself from the architects of those policies, such as Jaswant Singh, the foreign minister during that period who was recently expelled from the party. As prime minister, Modi would likely be sympathetic to his predecessors' regional ambitions for India but would wait until the country is economically strong to act. This suggests that India will continue to be passive on the global scene for some years to come.

If elected, Modi could turn out to be the muscular winner-take-all politician that India's Congress accuses him of being, focusing on an internal agenda that discourages foreign engagement. The United States would no doubt prefer that he follow the economic (though not social) course he charted in Gujarat, engaging internationally and rebuilding international relations, beginning with South Asia. Such an approach could help boost India's economy and reestablish its relevance, perhaps making it the regional power it was expected to become.

This commentary originally appeared on GlobalSecurity.org and The RAND Blog on May 5, 2014. Commentary gives RAND researchers a platform to convey insights based on their professional expertise and often on their peer-reviewed research and analysis.