Is There a Hidden Message in the Taliban's 2014 Fighting Season Plan? 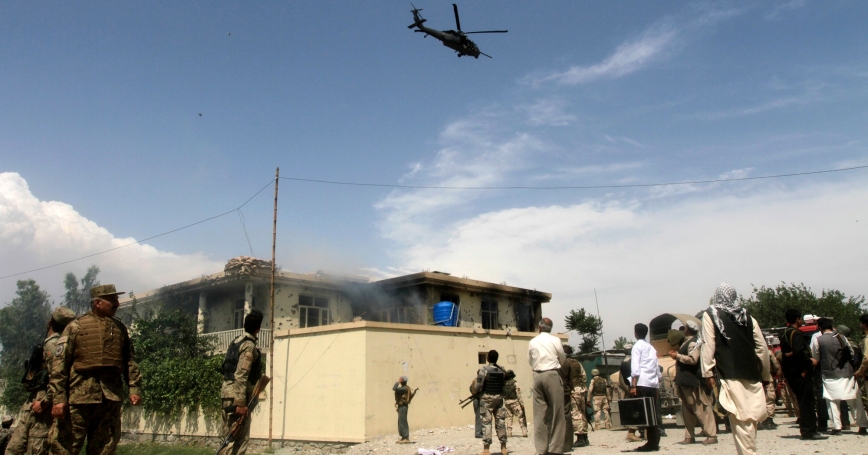 A NATO helicopter flies over the site of a suicide attack in Jalalabad May 12, 2014, the first day of the Taliban's declared summer offensive.

Mid-May marks an annual rite observed in Afghanistan for the past 35 years: the start of the spring fighting season. The patterns of nature shape the patterns of warfare: Plant poppy, hunker down for the winter, harvest opium, then go to war. Now that this year's opium crop has been mostly harvested, it is time to fight.

On May 27, President Barack Obama outlined his plan to withdraw U.S. troops from Afghanistan — leaving 9,800 by the end of 2014, with a full withdrawal by the end of 2016. A couple weeks earlier, however, the Taliban, with their estimated 30,000 soldiers, announced “Khaibar,” their own plan for the operations they will be conducting this spring and summer.

The Taliban generally name each year's offensive after an event or person from early Islamic history. In the strategically significant Battle of Khaibar, fought in the seventh year of the Islamic calendar, or 628 CE, the Muslim forces defeated a much larger army composed of several Jewish tribes and their Arab allies. If the Taliban's choice of this ancient battle has a specific symbolic meaning — and, as in past years, any precise correlation between names and meanings remains conjecture — it could mean several interesting things.

Most importantly, the Taliban's strategy in the following months may be to launch head-on attacks on U.S., U.N., and Afghan forces. The Battle of Khaibar was a frontal assault on a strongly fortified oasis — that was what made it so epic. Indeed, the Taliban's announcement of its spring campaign explicitly notes that the battle “resulted in the conquest of heavily fortified enemy castles and bases.” On May 12, the first day of the campaign, the Taliban launched rockets at the massive U.S. base at Bagram and the well-protected Kabul Airport. No casualties resulted from the rocket attacks, but Taliban assaults on the provincial justice department office in the city of Jalalabad and several police checkpoints in the city of Ghazni left 10 Afghans dead. If they are following the playbook of the original Khaibar campaign, the Taliban will attack positions of military strength rather than focus on soft targets among civilians.

Khaibar was not a religious conflict between Muslims and Jews: During this period, the nascent Muslim community allied with, and fought against, tribes composed of both Jews and unconverted Arabs. Indeed, the Prophet Mohammed was invited to Medina (near Khaibar) to serve as an arbiter between tribes whose feuds were based on politics rather than faith.

How does this relate to Taliban strategy? In regards to Khaibar, the Taliban clearly see themselves as the Muslim forces. Their enemy consists of misguided cousins: at the original Khaibar, Arab tribes that hadn't accepted Islam; today, Afghan government troops and outsiders. At Khaibar, the outsiders were Jewish tribes; today, U.S. and NATO forces. The original Khaibar was fought over politics rather than ideology. The Prophet Mohammed's intent wasn't to forcibly convert or obliterate his enemy; it was merely to defeat them. The Taliban's statement likewise focuses on conventional military objectives: While it warns that Afghan collaborators will be targeted, it vows to “inflict maximum losses on the invaders while preventing corporeal and financial losses on the ordinary civilians.”

Despite the stern tone, the reference to Khaibar — a conventional battle in which noncombatants were left unharmed — might actually hint at a Taliban strategy aimed at post-conflict reconciliation.

Perhaps the most important result of Khaibar was the creation of a successful modus vivendi for Jews and Christians living in Muslim communities. After his victory, the Prophet Mohammed spared his enemies, and even permitted the Jewish tribes to continue living in the oasis; he imposed a financial penalty, which would provide the foundation for the jizya (community tax) imposed on Christians and Jews, in exchange for religious tolerance by Muslim rulers for the subsequent 12 centuries. Like most taxes, the jizya often caused resentment — but it exempted these communities from obligatory military service, and stood in contrast to the treatment accorded to Muslims and Jews in Christian Europe.

What might this mean today? If the drafters of the Taliban statement are serious about modeling their strategy on Khaibar, they may be signaling a future pact with the West. In this modern version of jizya, perhaps Americans and other foreigners would be welcome to live and trade in Afghanistan — for a price. It is noteworthy that the Taliban statement speaks of the “complete defeat of the foreign invading forces” and warns that a mere reduction in the numbers of foreign troops will not stop the battle — but it does not suggest carrying the fight beyond Afghanistan, nor a continuation of hostilities once the last foreign soldier has left. The “infidel” is never portrayed as an existential threat — merely as an invader to be repelled.

It is possible, therefore, that the Taliban are sending a subtle message about their willingness to strike a post-withdrawal deal with the United States. The end of fighting may be the beginning of negotiation. Of course, clearly the U.S. Congress is not about to appropriate funds for an annual bribe, and the Taliban are in no position to dictate terms to an Afghan government in the process of conducting the most widely supported exercise of popular democracy in the nation's history.

But for understanding the battle strategy this summer season, the name the Taliban has chosen for its final effort is a good place to start.

Jonah Blank, an anthropologist and Professorial Lecturer at the Johns Hopkins School of Advanced International Studies, is a Senior Political Scientist at the RAND Corporation. He is author of “Mullahs on the Mainframe: Islam and Modernity Among the Daudi Bohras.”

This commentary originally appeared on ForeignPolicy.com on May 29, 2014.