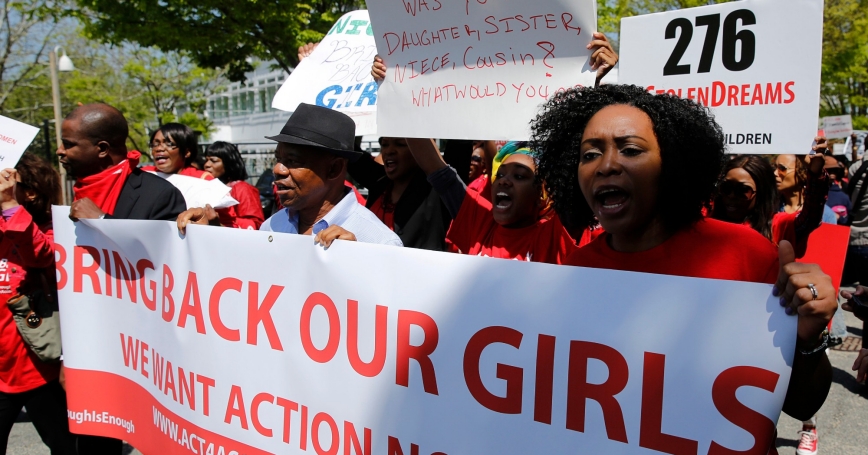 There is much we do not know about the circumstances of the 220 young Nigerian schoolgirls being held by Boko Haram. Where are they being held? Are they still together in a single group or dispersed into smaller groups? Have some already been “sold” and are now captives of individual buyers? How are they being guarded? Could Boko Haram's leader be persuaded to return them unharmed in return for something that Nigeria realistically could offer?

Much will depend on Boko Haram's objectives. The abduction already has brought the group worldwide attention and has created terror in Nigeria, where parents will be reluctant to send their children, especially girls, to school. This is precisely what the group wants to achieve. While some of Boko Haram's members consider it their duty to prevent the sin of female education, others may see the abduction as revenge for their family members who allegedly have been taken away by Nigerian forces.

The abduction has exposed the government's weakness just when Nigeria was presenting itself as a showcase for African progress by hosting a World Economic Forum meeting. The incident will hardly encourage foreign investment. And it might provoke a heavy-handed crackdown on the jihadists that alienates Nigeria's Muslim population.

The Nigerian government faces a dilemma. Angry demonstrations in Nigeria and international press coverage will not allow government inaction. It must now try to rescue the girls or persuade Boko Haram to release them. A rescue attempt, assuming the girls are located, risks heavy casualties among the hostages. The government would be blamed for this, even if it is the terrorists who have created the situation. If the government offers publicly to negotiate, it could face increasingly unrealistic demands, then risk blame, again unfairly, if negotiations fail and hostages are either not returned or harmed.

Boko Haram might find reason to release its captives. Logistically, it is not easy to hold 220 young girls. Failure to care for them will lead to losses. Their presence will create dissension and fights among their guards. Harming the girls may alienate some of the group's most ardent supporters. Even sympathetic imams will condemn the abduction as un-Islamic and warn captors of consequences in the hereafter. Not all of al-Qaida's affiliates are comfortable with actions that discredit their struggle. Can al-Qaida's leader Ayman al-Zawahiri dare to appeal for the girls' release?

Large-scale hostage events are not unprecedented. In 1970, terrorists hijacked several airliners and flew them to a remote airfield in Jordan where they gathered 310 hostages in front of the world's media. The United States contemplated but decided against armed action. That was probably a wise choice. Eventually a deal was made and the hostages were released.

In 1978, terrorists seized more than 1,500 hostages at Nicaragua's National Palace. Again a deal was struck; the hostages were released. In 1995, Chechen extremists took nearly 2,000 hostages at a hospital in Russia. The hostages were released when Russia agreed to suspend military operations in Chechnya. In 1996, terrorists in Peru seized hundreds of hostages at the residence of the Japanese ambassador. They released many, but held 72 hostages for 126 days until commandos carried out a daring, successful rescue.

Although Israeli commandos rescued more than 100 hostages held by hijackers in Entebbe, with only one hostage fatality, the historical record suggests that when many hostages are involved, rescues are bloody affairs. Early RAND research on hostage situations showed that of all the ways hostages may be killed — during the initial abduction, trying to escape, murdered by their captors or during the rescue — 79 percent died during the rescue.

Almost all of the armed rescues have been carried out in situations where security forces surrounded the captors and their hostages. Jungle rescues are rare, although there have been successful ones in Sierra Leone, the Philippines and Colombia. None of these involved large numbers of hostages.

Where the captors are at large, hostage episodes tend to be long sagas. Four French hostages recently released by al-Qaida's affiliate in Algeria were held for three years. Ingrid Betancourt was rescued by Colombian commandos after six and a half years of captivity. Kidnappers in Lebanon held American and British captives for seven years.

The United States has appropriately offered assistance. It can provide technical intelligence, advice in dealing with hostage situations (as France and the United Kingdom already have done), diplomatic help, and support in a rescue. It would, however, be unwise to assume a leading role and the inescapable burden that comes with it.

This commentary originally appeared on U.S. News & World Report on May 16, 2014. Commentary gives RAND researchers a platform to convey insights based on their professional expertise and often on their peer-reviewed research and analysis.