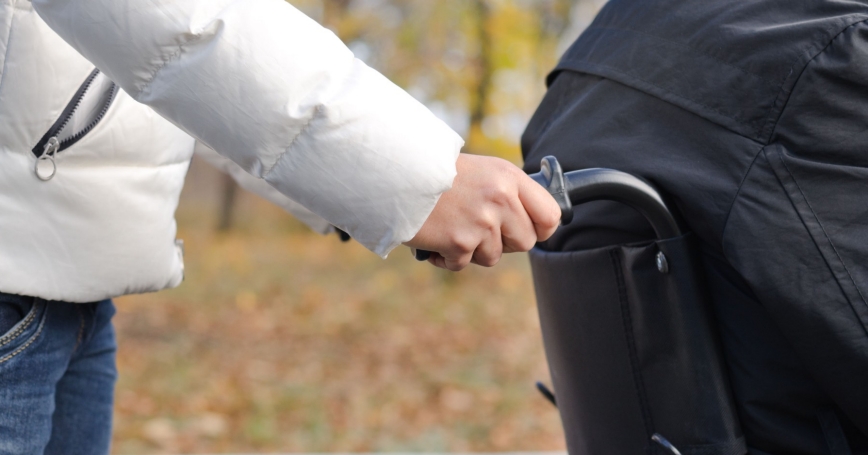 by Rachel O'Hern and Terri Tanielian

“At first glance, my life looks pretty normal. I have a husband of almost five years I adore, a cute dog that loves treats, a nice house with a two-car garage and a fenced yard. A pretty good life for a pair of 28 year olds, but nothing remarkable. But when you look a little closer, there's more than meets the eye, and remarkable doesn't even begin to describe our journey. The suit my husband wears to work every day hides the two prosthetic legs and the prosthetic hand he uses to walk, drive, and even do pull ups. Just 18 months after we said “I do,” and seven months into a tour of duty in Kandahar, Afghanistan, I was notified my husband had been injured in an IED blast, and had lost three limbs.”

This is how Rachel O'Hern begins to tell the story of her life as a military caregiver, one of millions of American wives, husbands, siblings, parents, children and friends who struggle and sacrifice to support service members and veterans with physical or emotional injuries or illnesses. As America remembers those lost in battle this Memorial Day, it should not forget the sacrifices of those who care for the wounded survivors.

The RAND Corporation found in a recent survey that of the 5.5 million military caregivers in the U.S. today, 1.1 million are caring for those who served in the military after the terrorist attacks of 9/11. These caregivers, who like O'Hern are mostly young, have decades of service ahead of them.

Because they face these challenges with few advocates and limited services, they are sometimes called America's hidden heroes. Stories like Rachel's can help raise awareness of the tremendous debt America owes, not just to those injured or emotionally damaged by battle, but to those who care for them when they return home as well.

After Rachel's husband, Capt. Larkin O'Hern, was injured, the couple spent the next two and a half years grieving for what they'd lost, and building a foundation for a new future. He would go through countless surgeries, physical therapy, and eventually walk out the doors of the rehab center completely independent. She would be the bandager of residual limbs, the pusher of the wheelchair, the counter of the pills, the keeper of the schedule, and the signer of consent forms. Rachel turned 25 with her husband one day removed from the intensive care unit, and she immediately took charge of decisions on treatment, surgeries, and medication changes. She learned to ask lots of questions, speak up, and anticipate all possible outcomes.

The most difficult part of those early years was the feeling that she was flying without a co-pilot. Her husband, once focused and driven, was now frequently distant, distracted, and depressed. Between the side effects of pain medication, concern for his soldiers still fighting in Afghanistan, and the realization that his life had been fundamentally altered, it often was all he could do to get out of bed in the morning. Some days, even that was asking too much. Day and night Rachel was his safety net, a link between their shared past and the shattered future they were trying to rebuild. They got through that period together and have moved on, but Rachel often wondered if, like so many caregivers, this would be her world for the rest of her life.

Now, after three years of both tough and triumphant days, Rachel considers herself a temporarily retired wheelchair pusher. “While I am grateful to have put the days of pill counting and bandage wrapping behind me, I still have that constant vigilance, a watchful eye for anything that could go wrong,” she says.

Looking ahead is still difficult. What will the couple's life look like in ten years? In 30? Rachel asks herself: “When he gets out of the Army, and goes to an interview for a civilian job, what will potential employers see? Will they see a National Merit Scholar with a graduate degree, and an incredibly tenacious spirit, or will they see a liability and costly disability accommodations? Once the war is over, and public interest fades, will federal dollars continue to be allocated for research and development?” Acknowledging the huge strides in prosthetic technology, and recognizing the current generation of arms and legs work well for a healthy 28 year old, she notes that advanced powered prosthetics that might be needed later are still in early stages of development and aren't widely available. “How long will the delicate repairs on his left hand hold? When will the wheelchair and pain medicine once again become part of daily life?” she wonders.

With the RAND study shining a spotlight on the long-hidden issues facing military caregivers, policymakers should pause for a moment and contemplate the magnitude of the challenge they face. The long war in Afghanistan may be ending, but the consequences for Rachel and countless others will last far longer. Legislation and programs designed to help Rachel and other caregivers across the country are slow to grow and adapt, frequently lagging behind current needs. If this is the case now, with patriotism high and veteran's affairs a top priority, what will support look like in 30-plus years when Afghanistan is some forgotten place and veterans disappear from the nation's radar? This is why stories like Rachel's need to be told now.

Rachel O'Hern is a Master of Social Work and an Army wife. Terri Tanielian is a senior social research analyst at the nonprofit, nonpartisan RAND Corporation.