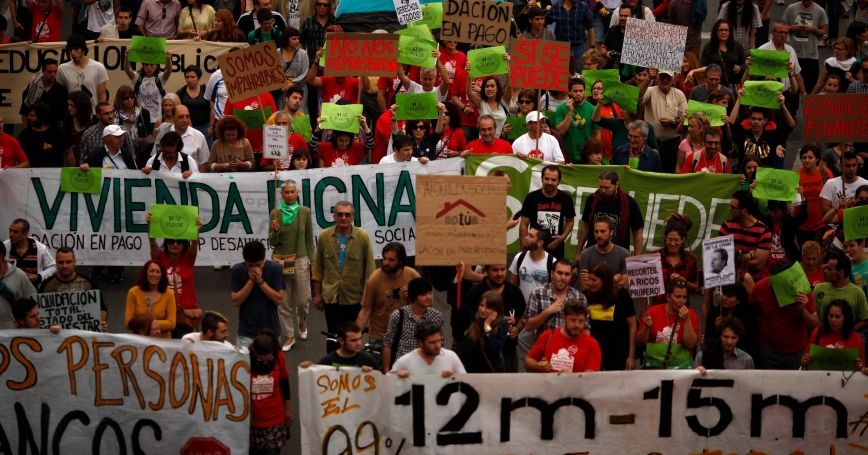 Protests in Malaga, Spain against the government's spending cuts and failure to revive the moribund economy

Around the world, most of the member states of the European Union are generally perceived as examples of successful democratic rule, but the situation is more nuanced than this. While democracy is the prevailing political system across the EU, its flavour differs from country to country.

With the emergence of new media, people have become increasingly empowered and enabled to participate in the political process. However, online activity may not translate to political activity, at least not in the classical sense. Why aren't EU citizens seizing new opportunities for political engagement?

A recent RAND Europe report, Europe's Societal Challenges: An Analysis of Global Societal Trends to 2030 and Their Impact on the EU, investigates this question, along with others related to social development in the European Union in the upcoming decades. Here, we take a closer look at the findings.

Over time, it has become much easier for individuals to take part in the political process, but the extent to which this change creates wide-scale interest in politics remains to be seen. In Western societies, where the opportunities for participation have been high for quite some time, there is observable evidence of policy fatigue, a primary example being low voter turnout in some of Europe's most prosperous and advanced countries.

This phenomenon is further highlighted by declining trust in the European Parliament, whose members are elected directly by the public. As many as 60 per cent of EU citizens reported high levels of trust in 1993, but these levels dropped to just 40 per cent in 2013.

This decline in trust is driven primarily by worrying developments in the countries that joined the union in the 1980s and 1990s, such as Spain, Portugal and Greece. Between 1993 and 2013, trust in the European Parliament in these countries fell from just over 50 per cent to 30 per cent, a pattern that stands out when compared with the relatively stable levels in the other member states. While there are certainly a number of reasons for this significant drop, it is reasonable to assume that the economic crisis and ensuing policy responses have been prominent drivers of discontent. Facing continuously high levels of youth unemployment and the slow recovery from the financial crisis, citizens have been quick to blame EU austerity measures and their own national governments. Images of young protestors in the streets in Greece and Spain come instantly to mind. Individuals who are “not in education, employment or training” as represent a new class of citizens disillusioned with the performance of their governments who want no part of the political process.

Grassroots Movements in a Digital Age

Recent revolutions and democratisation movements, ranging from Ukraine's Euromaidan and Occupy to the Arab Spring, have served as case studies for political change instigated by younger, possibly more revolutionary members of society.

Social media is frequently the fuelling force behind these movements. While we can certainly see a relationship between increased online activism and the formation of large, organised revolutionary movements, it remains to be seen whether social media holds the potential to actually change the ways in which people participate in the political process.

Recent online movements, such as Pirate Parties, have managed to penetrate the political process and influence traditional paths of policy formulation though the power of online ballots and social media pressure. The fact that the Internet can serve as an organising tool, bypass the traditional political process and allow people to rally around certain issues marks a paradigm shift in politics and policy. This shift, along with declining levels of trust in political institutions, likely represents an important challenge for policymakers who want to maintain the legitimacy of their institutions (including those at EU level).

The emergence of information and communication technologies has undeniably enhanced people's connectivity and ability to organise. However, some argue that the low thresholds for venting opinions through social media or participating in online debates actually have a negative effect on offline participation. After all, there is no rise in empowerment if people do not translate this ability to connect into concrete political action.

Evgeny Morozov summarized this attitude in 2009: “'Slacktivism' is an apt term to describe feel-good online activism that has little political or social impact. It gives those who participate in slacktivist campaigns an illusion of having a meaningful impact on the world without demanding anything more than joining a Facebook group.” This is indeed becoming a concern to policymakers and activists, as illustrated by an advertising campaign recently launched by UNICEF Sweden through its Facebook page: “Like us on Facebook and we will vaccinate zero children against polio. We have nothing against likes, but vaccine costs money. Please buy polio vaccine at unicef.se. It will cost you only 4 Euros but it will save the lives of 12 children.”

Although grassroots movements make use of online interaction for self-organisation, empirical studies have not found a clear connection between online participation and offline activism. Online social networks have proved to be an effective influencing tool for political participation in some cases, such as the 2010 U.S. congressional elections and MoveOn.org's support for Barack Obama's campaign in 2008. But their overall effectiveness in mobilising individuals who would not otherwise participate in social movements or the traditional political process is unclear.

The widespread availability and growing capacity of new media and its tools, accompanied by the reduced cost of producing user-generated content, have enabled citizens around the world to engage in public discourse and connect with others to foster societal change. They could also empower minorities and other disadvantaged groups that often lack political influence in mainstream politics.

Bridging the Gap Between Online Activism and Offline Engagement

There is a European democracy paradox: While social media and other tools have enhanced opportunities to participate in the political process, these new drivers do not seem to translate easily into offline political participation. Younger citizens in the Southern European member states, in particular, have been at the forefront of demonstrations and protests, but their passion does not seem to extend to the ballot box.

Further research could help identify whether these trends are the result of simple slacktivism, general disillusionment with the government, or a refusal to participate in the political process. A better understanding of the reasons could help politicians reach out to these populations and begin to bridge the trust gap.

Marlon Graf is an assistant policy analyst at the nonprofit, nonpartisan RAND Corporation and a doctoral candidate at the Pardee RAND Graduate School. He is a co-author of Europe's Societal Challenges: An Analysis of Global Societal Trends to 2030 and Their Impact on the EU, commissioned by the European Strategy and Policy Analysis System.