An Outbreak of Outbreaks 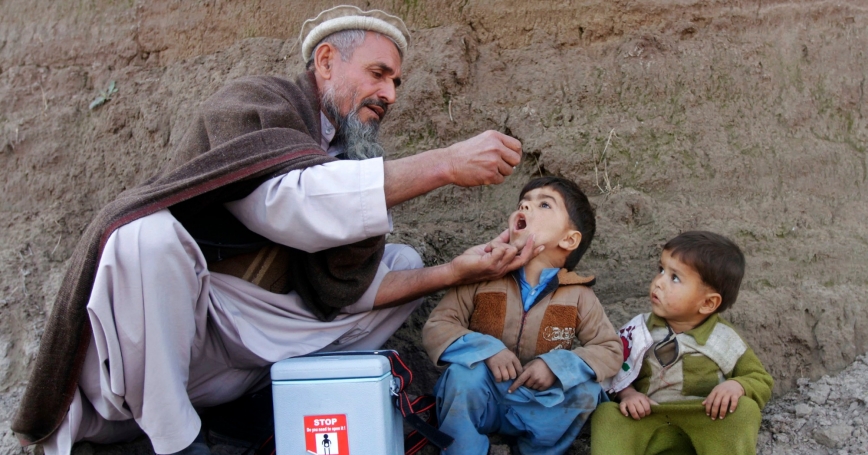 A child receives polio vaccination during an anti-polio campaign on the outskirts of Jalalabad, Afghanistan

Lately, stories about outbreaks seem to be spreading faster than the diseases themselves. An outbreak of measles in Ohio is just part of an 18-year high of U.S. cases. Meanwhile, polio continues to circulate in Pakistan, Afghanistan, and Nigeria, while spreading to other countries, like Cameroon, Equatorial Guinea, and Syria, leading the World Health Organization to declare a “Public Health Emergency of International Concern” last month.

The Role of Globalization

With modern transportation shuttling people and products to nearly any part of the world in a matter of hours, the volume of these comings and goings is unprecedented. In 2008, approximately 360 million travelers entered the United States, which also takes in about 50,000 refugees annually.

It should be unsurprising, then, that the Ohio measles outbreak started when unvaccinated Amish missionaries visited the Philippines, then returned home. Infected persons spread the disease to others within their largely unvaccinated communities. The last naturally occurring U.S. outbreak of polio occurred in similar fashion: An outbreak in the Netherlands spread to Canada in 1978, then to the United States the following year, all among unvaccinated Amish populations across four states.

Strife can interrupt routine vaccination campaigns, as is largely happening with polio. For example, the largest numbers of polio cases last year were in Somalia and Pakistan. Refugees and other displaced populations without health care access can create fertile settings for disease spread, especially if they're not protected by vaccination. Health workers involved in vaccination campaigns can become targets of violence. And in some areas—Nigeria, for example—religious leaders have convinced their followers that the polio vaccine is a biological weapon promulgated by the West.

For the most part, the United States doesn't face these barriers. In America, vaccination is more of a choice. Unfortunately, some Americans are putting themselves, their families, and their communities at risk by choosing not to get vaccinated. If those who opt out of vaccination travel to areas where diseases are more common or come in contact with individuals arriving from such areas, they'll be at risk of becoming ill from otherwise preventable diseases.

The Role of Psychology

The evidence in favor of vaccinations is overwhelmingly strong, but some Americans remain skeptical. Groups such as the Amish may eschew vaccination for religious reasons, but what about other Americans? Why might they abstain from what the Centers for Disease Control calls one of the ten great public health achievements of the 20th century?

An important factor driving this trend is how individuals perceive risk, which can influence decisionmaking.

For example, people can be influenced by the “tyranny of the anecdote,” whereby a memorable or compelling story—whether true or not—often carries more weight than population-level statistics. Consequently, personal risk has more psychological influence than public good, perhaps because individuals experience the former directly and the latter indirectly.

Small-chance events can also have a disproportionate effect on risk perceptions. For example, the recent disappearance of Malaysia Airlines Flight 370 has likely increased perceived risk of flying, even though risks are extremely small in reality.

This has played out with infectious diseases, too. A RAND study showed that, on average, respondents reacted sensibly to the risk of contracting H1N1. However, the same individuals dramatically overestimated H1N1's lethality if caught, a much smaller chance.

Risks that individuals dread or do not understand also tend to capture their attention, potentially affecting their decisionmaking disproportionately. This has unfolded on a large scale with the popular narrative about vaccines leading to autism in children: The prospect of a thoroughly studied yet unsubstantiated risk that parents dread can completely dominate the much larger risk of allowing children to go unvaccinated.

Finally, risk perception is affected by beliefs, values, and motivations. Policy and personal decisions don't happen in a vacuum; context can predispose individuals to certain ways of thinking. Plus, beliefs could be reinforced through social networks or media venues that constrain information and deepen self-justification, and most individuals are adept at focusing on evidence that confirms their beliefs.

What Can Be Done?

So what can be done to avoid or limit the spread of diseases?

The United States has made progress in both protecting our own population and recognizing the risks that globalization can bring to public health, but there's still more it can do. This includes increasing awareness among clinicians and public health departments as they treat unusual illnesses, report cases, respond to outbreaks, and help international travellers prepare.

Additionally, population health interventions may have more success if they're founded on an understanding that resistance to interventions is, more than likely, rooted in the psychology of risk perception rather than the actual level of risk of the intervention itself. Effectively communicating risks to the public and putting risks into perspective is critical to improving the situation.

By better responding to the impact of globalization (on a population scale) and psychology (on an individual scale), perhaps American stakeholders can curb the current uptick in preventable diseases.

This commentary originally appeared on The Health Care Blog on June 11, 2014. Commentary gives RAND researchers a platform to convey insights based on their professional expertise and often on their peer-reviewed research and analysis.