Is Afghanistan the Next to Crumble? 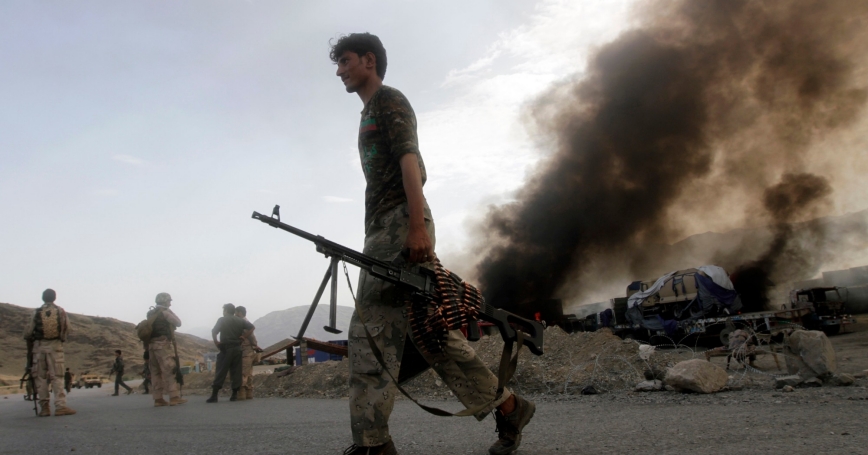 Afghan security forces leave the site of burning NATO supply trucks after an attack by militants near the Pakistani-Afghan border, June 19, 2014

Amid the stunning rout of Iraqi forces in northern Iraq, many have asked whether a similar reversal of American foreign policy goals is possible in Afghanistan. The answer is a qualified yes.

Of course, Iraq and Afghanistan have a number of differences, urbanization, wealth, history, and geography among them. They have in common a lengthy U.S.-led intervention combining efforts to build a military force with the creation of a government. Iraq, like Afghanistan, held elections in the waning days of American involvement, to form a multi-ethnic government. As with Iraq, the U.S. military is announcing plans to leave Afghanistan on a note of cautious optimism.

In Afghanistan, as in Iraq, there is widespread disaffection with the government. In fact, it is not uncommon to hear Afghans refer to their government as a mafia. Corruption and patronage dominate both governments, ranking among the world's worst according to Transparency International. The defense and security sectors of both countries are assessed at a high risk of corruption, ranking in the bottom third worldwide. Moreover, the absence of a coherent political strategy in Afghanistan to address issues of factionalism, patronage and corruption has contributed to the development of a government that few seem willing to fight for.

In both countries, a persistent bias toward combat operations over institutional capacity-building and governance prioritized the here-and-now over the long haul. As a result, efforts to develop intelligence, logistics and sustainment capabilities lagged far behind efforts to reach manpower and equipment goals.

Of course, it is too early to say that these failures will lead to a collapse of the military, but few attempts have even been made to ask the question. There is at least a basis for concern: A 2010 audit (PDF) by the Special Inspector General for Afghan Reconstruction found that both corruption and infrastructure failures had a corrosive effect on morale within the Afghan National Security Forces.

The preparation of the force is only half of the equation. Equally important is the nature of the threat faced by the military. In Iraq, the insurgents are the Islamic State in Iraq and the Levant, known as ISIL or ISIS, brutal actors with an agenda of disruption and dreams of a caliphate. They resemble the Taliban of the nineties, who wanted power without the shackles of actually governing a state.

The Taliban today are very different. They have honed their skills at local government, as evidenced by the sophistication of their judicial system and the existence of shadow governments in districts across the country. The Taliban probably have less interest in random violence, and more desire to coopt institutions of government compared to ISIL.

A Taliban takeover in the hinterlands might not involve much more than targeted assassinations to allow supporters step into the shoes of local governors. A political takeover of this type would be equally damaging to Kabul, but not obvious to outsiders until it is poised to fall.

Moreover, Afghanistan has a government that may well splinter on its own without impetus from insurgents. Its brewing electoral crisis shows how close to partisan fracture the country is. This, combined with a less severe internal paramilitary threat, could cause the opposite response of Iraq's. As the most visible arm of the state, the security forces' role may grow. Particularly if the perceived threat from Pakistan increases, a military takeover of the Afghan government is not out of the question.

And of course there is one final, important difference — the United States hasn't left Afghanistan yet. With the short time remaining, there are a few key tasks ahead. First, the United States must use this time to develop relationships with key figures in the security forces and government. Certainly the United States is plugged in with the top people in the current government, but it needs to forge more lasting relationship with influencers who are likely to survive expected political shifts, like division commanders or governors. In Afghanistan, the risks are so varied and the threats will likely metastasize unpredictably in the next five years. Deep relationships will provide visibility into the shifting political and security sands of the country and an opportunity for leverage to avert the worst of catastrophes.

Second, the United States must shift its approach to training the Afghan National Security Forces. In the final analysis, what matters most is not whether the army and police can shoot straight; they must fundamentally commit their loyalty to the Afghan people and their legitimate government. Instead of working toward endstrength and equipment goals, or even toward marginal gains in training and battlefield effectiveness, the priority should be on strategic and operational planning skills, sustainment and professional ethos. This requires dismantling existing bean-counting efforts in order to devote greater focus on these key areas.

Those who believe this remaining time should be dedicated to building Afghanistan into America's vision of an independent nation fail to see that it has always been one, with its own priorities and security calculations; its own war, alongside America's, but ever separate. Now is the time for the United States to understand Afghanistan's coming struggle, and to help Afghans build a path to stability.

This commentary originally appeared on U.S. News & World Report on June 24, 2014. Commentary gives RAND researchers a platform to convey insights based on their professional expertise and often on their peer-reviewed research and analysis.