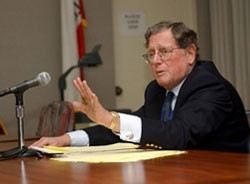 Each year, the Pardee RAND Graduate School is able to provide a full scholarship to a first-year student from a former Soviet state, adding important global perspectives to the class of future policy leaders. The scholarship is named in honor of Jeremy Azrael, a leading expert on the Russian economy who devoted his career to promoting better understanding between the United States and the former Soviet Union. The Business Leaders Forum that he established in 1997 continues to bring together Russian, European, and American executives and political leaders for regular exchanges twice a year. After Jeremy passed away in 2009, a group of his friends and colleagues established another lasting legacy for him and his life's work by donating to a scholarship in his name.

The most recent Azrael Scholarship was awarded to Gursel Aliyev, who holds an M.A. in economics from Northeastern University and a B.A. in international economic relations from Azerbaijan State Economic University. Prior to joining Pardee RAND, Gursel was the country director for Azerbaijan's Caucasus Research Resource Center, an organization that promotes evidence-based policymaking and builds the capacity of social science researchers in the South Caucasus. His interests include survey research, modeling, and game theory.

The inaugural Azrael Scholarship was awarded to Olena Bogdan. She graduated with honors from Kiev's National Aviation University with a B.A. in international relations, and then earned her M.A. in economic analysis from the Kyiv School of Economics and the University of Houston. Olena has worked for the International Organization for Migration on human-trafficking issues and at the Organization for Security and Co-operation in Europe on preventing domestic violence. Her interests include economic development, international relations, the environment, and health. She has begun her work on RAND and Pardee RAND projects focused on reducing health disparities and developing systems for health-sector monitoring.

Scholarships are an essential part of recruiting top-tier Ph.D. candidates from diverse and interesting backgrounds and easing the financial burden so that students can focus on their course work and dissertations. It is thanks to the generosity of our donors, like those who have honored Jeremy's legacy, that we are able to attract top students and provide them with the analytic training and tools to help solve many of the world's most pressing problems.

“It is an honor for me to be the first Azerbaijani recipient of the Jeremy Azrael Scholarship. I hope to gain both practical and theoretical knowledge from professional policy analysts who specialize in various policy issues. Possibilities to work with professionals from different fields on a wide range of policy problems are abundant at RAND. I see this program as a chance to improve my research and analytical skills and to develop my ability to devise creative solutions to policy problems.”