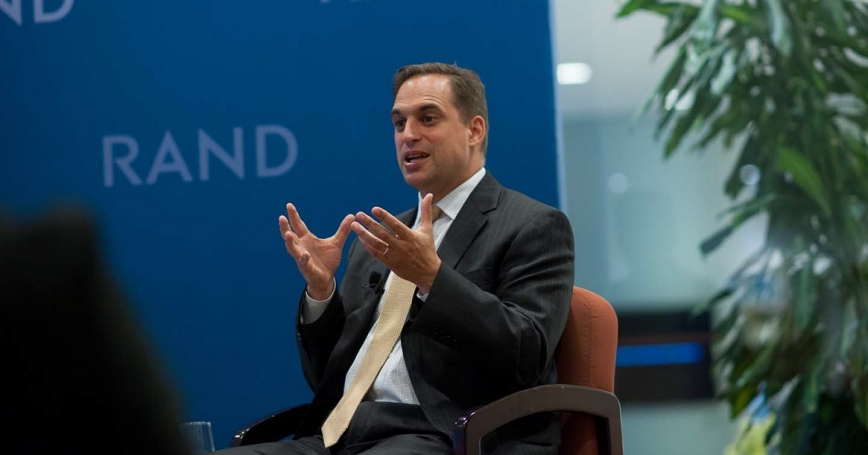 Seth Jones speaking at a colloquium on the Middle East at RAND's Santa Monica office on May 14, 2014

Seth Jones, a specialist in counterinsurgency and counterterrorism research, has been named director of the International Security and Defense Policy Center at the RAND Corporation.

Jones's counterinsurgency and counterterrorism research has focused on Afghanistan, Pakistan, and al Qa'ida. He is author of Hunting in the Shadows: The Pursuit of al Qa'ida Since 9/11, a New York Times “Editor's Choice,” and In the Graveyard of Empires: America's War in Afghanistan, which won the Council on Foreign Relations Silver Medal for Best Book of the Year.

His RAND publications include A Persistent Threat: The Evolution of al Qa'ida and Other Salafi Jihadists, Afghanistan's Local War, Counterinsurgency in Pakistan, and How Terrorist Groups End: Lessons for Countering al Qa'ida. He has testified often before Congress on these issues.

Jones received his master's degree and Ph.D. in political science from the University of Chicago.

The RAND International Security and Defense Policy Center conducts research and analysis that examines the implications of security, political, and economic challenges for its sponsors. It assists national security decisionmakers develop strategies and policies to manage and adapt to these challenges and to protect interests at home and abroad, develop new operational concepts to address challenges, and develop forces and plans to implement their strategies. It also examines how to best advance security cooperation to improve international security and stability.