Key to Iraq May Rest with Syria 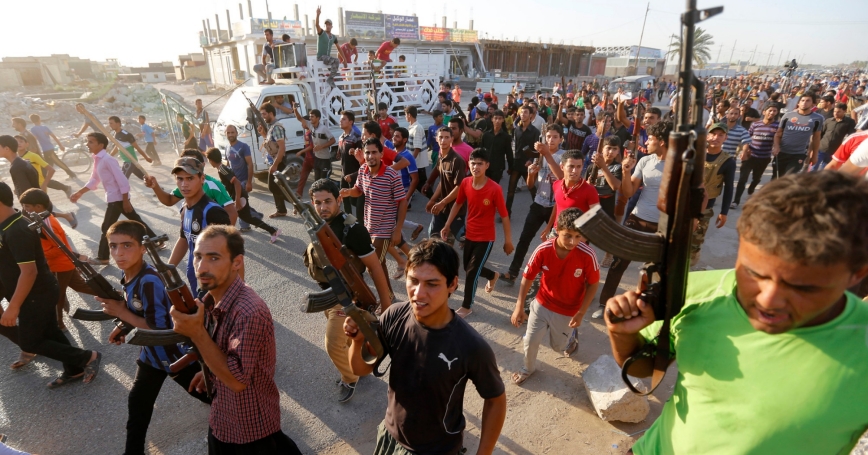 Volunteers, who have joined the Iraqi Army to fight against militants from the Islamic State of Iraq and the Levant (ISIL), in a parade in eastern Baghdad, June 15, 2014

The recent jihadist seizure of two major cities in northern Iraq, Mosul and Tikrit, is a clear indicator that the spillover of violence from the Syrian civil war is rapidly reshaping the Middle East. Inaction and half measures by the international community — along with the sectarian nature of Iraq's governance — have allowed al-Qaeda and its affiliates under the black flags of the Islamic State of Iraq and Syria (ISIS) to establish themselves in eastern Syria and western Iraq. ISIS's continued control of this region would allow them to gain momentum as they target new recruits from the increasingly radicalized youth in the region. Unchecked, ISIS and its affiliates will further deepen the divide between Sunnis and Shiites throughout the region. And it appears that ISIS has now set its sights directly on Baghdad.

These bold actions by ISIS in Iraq pose a direct threat to the predominantly Shiite government in Baghdad, which does not have the wherewithal to counter the jihadists. It also creates a perilous situation for Turkey and for the Kurds in northern Iraq, where Kurdish peshmerga forces would face an uncommon challenge against ISIS.

Iraq's current crisis is set amidst simmering turmoil elsewhere in the region. Lebanon is feeling the effects of added sectarian strife along its borders and in Beirut. Jordan is taking steps to protect itself from the spread of jihadist ideology while confronting — along with Lebanon — the challenge presented by housing more than half a million Syrian refugees within its borders. Saudi Arabia and the Arab Gulf states are worried about the possibility of unrest from their Shiite populations — many of whom are in oil-producing areas.

The continued arming of the rebels to fight the regime in Syria is not the answer. Thus far, external military aid to the rebels has not tipped the balance against the regime. And, given the recent gains of Syrian government forces, more rebels will only serve to increase the fighting and instability in the region, as will the continued flow of refugees into neighboring states, all of whom are strong U.S. allies.

What to do? A full-scale military invasion of Syria by a coalition of western forces would require, in addition to the upfront expenditure of blood and treasure, a more substantial nation-building effort than the U.S. and partner nations are willing to bear in the wake of such efforts in Iraq and Afghanistan.

The answer may lie instead in a negotiated settlement, which includes negotiating with Syrian President Bashar Assad, perhaps brokered through the Russians and Iranians. As unpalatable as it may be to the West, such a settlement would acknowledge the political and geographical realities on the ground. Syria is now a divided country. Assad shows no signs of leaving. Iraq could end up being partitioned if current trends continue. And the situation in Syria presents a serious threat to the stability of Lebanon, Jordan, Turkey and the Arab Gulf, as well as western oil interests.

A settlement with the regime in Damascus, in the form an imposed peace over selected safe zones within Syria that would protect segments of the Syrian population most likely to suffer at the hands of Assad's forces and guarded by an international stabilization force, would enable Assad to reconsolidate areas of the country under his control and reverse — or at least slow — the destabilization of the region.

Assad has much to gain from this proposal, as do Tehran and Baghdad. In turn, Assad could help NATO and other willing partners focus time and resources on ISIS, which poses the greatest threat to the Middle East, the United States, and Europe.

William Young is a senior policy analyst at the nonprofit, nonpartisan RAND Corporation.

This commentary originally appeared on usatoday.com on June 14, 2014.