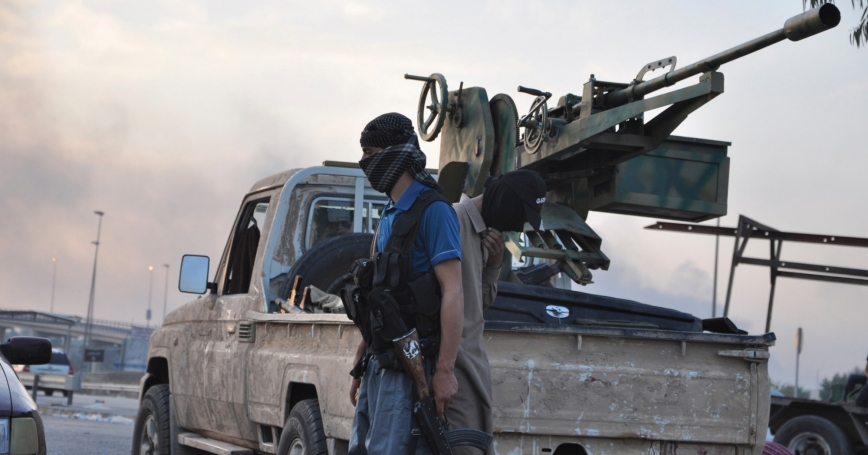 Fighters of the Islamic State of Iraq and the Levant (ISIL) stand guard at a checkpoint in Mosul, Iraq, June 11, 2014

The Islamic State of Iraq and Syria — commonly known as ISIS — launched a terrifying offensive this week which captured territory in northwestern Iraq, including strategic Iraqi oil infrastructure. ISIS's lightning offensive is not over, as the group has announced its intention to continue marching south to Baghdad. On the surface, President Obama faces a classic foreign policy dilemma: The Iraqis are asking for U.S. military assistance to halt ISIS's dangerous offensive, but Obama has long promised the American people that he would withdraw the U.S. military from involvement in Iraq.

Obama's dilemma is heightened by the simple fact that ISIS is the baddest, most capable, terrorist group in the world today. Since 2004, the group has inflicted four times more casualties than al-Qaida itself. In February, al-Qaida leader Ayman al-Zawahiri expelled ISIS from al-Qaida — a move unprecedented in al-Qaida's 25-year history — in part because of ISIS's wanton use of indiscriminate violence. Now, ISIS poses an existential threat to the democratically elected government of Iraq, and its aggressive expansion in Iraq threatens to exacerbate a broader regional war that until now was centered in Syria.

How did ISIS transform itself from a group on the brink of defeat in 2009 to the most lethal terrorist group in the world today?

ISIS has pursued a local and regional strategy in Iraq and Syria, which is at odds with al-Qaida's approach of waging global jihad with a focus on striking the United States and Europe. The methods ISIS has used in establishing an Islamic state in Iraq and Syria resemble those that other violent entrepreneurs have successfully employed elsewhere throughout history.

Contrary to the common view of al-Qaida as a decentralized global network, documents captured from ISIS reveal that the group relies on a combination of strict hierarchical organization, coercive violence and economic resources to establish and maintain control over Iraq and Syria's Sunni regions. Its hierarchical organization and elaborate bureaucracy has institutionalized the group's ability to control and deploy resources — fighters, money and arms — extremely effectively.

ISIS's success in Iraq and Syria have improved its prospects of establishing a safe haven in the Levant, and its fundraising strategy, bolstered by its recent looting of over $400 million from a Mosul bank, are likely to ensure its ability to bankroll major operations against targets of its choosing for the foreseeable future.

For the United States, these prospects are daunting. After all, in the 1990s, al-Qaida's safe haven in Afghanistan and its ample funding were key enablers of the 9/11 attacks. To make matters worse, ISIS now has a significant number of U.S. and European recruits.

Could ISIS's newfound safe haven and resources similarly lead to an attack on the West? ISIS's history is instructive here. After U.S. Special Operations Forces killed its maniacal founder Abu Musab al-Zarqawi in 2006, the group has shown little interest in attacking the West. Its main aim is to establish an Islamic state in the Levant. This requires a focus on local and regional issues, such as capturing Sunni-dominated parts of Iraq and Syria. A secondary priority is its simmering war against al-Qaida. Both goals require continued focus on local and regional issues. Attacking the West would only distract ISIS from these goals.

ISIS poses an urgent threat to the Iraqi government. Iraqi Prime Minister Nouri al-Maliki has reportedly requested that the United States conduct drone strikes against ISIS to help roll back the threat. However, ISIS is strong in both Iraq and Syria, and has freedom of movement across the border. The potential for limited U.S. strikes to degrade ISIS is low, both because of the group's haven in Syria, where the United States cannot conduct drone strikes because of robust Syrian air defenses, and because the Iraqi government is unlikely to be able to capitalize on any gains that U.S. airstrikes might make.

In fact, drone strikes might not only be inconsequential, but also counterproductive. American aggression could trigger ISIS leadership to turn its focus to the West.

Yet the United States is not without options. Instead of conducting drone strikes, the United States could send small non-combat teams to Iraq to provide advice, assistance and intelligence to Iraqi security forces. This model of foreign assistance was crucial in turning the tide in the Philippines' struggle against locally focused Islamist militants. U.S. assistance should also focus on aiding Iraq's ability to provide close air support to its ground forces, which has been a key Iraqi weakness that precipitated this crisis as many of its Army divisions allegedly abandoned their posts in the field.

Of course, the Obama administration should maintain a high degree of awareness of ISIS's intent in case it does decide to shift its focus to the West. Its resources, safe haven and Western recruits mean that it still retains the unique capabilities necessary to attack the United States. But until there are clear indications of an imminent and direct ISIS threat to the U.S. homeland, the United States should keep at an arms distance.

Patrick Johnston is an associate political scientist at the nonprofit, nonpartisan RAND Corporation. Benjamin Bahney is an adjunct researcher at the RAND Corporation and author of An Economic Analysis of the Financial Records of al-Qa'ida in Iraq.

This commentary originally appeared on U.S. News & World Report on June 17, 2014. Commentary gives RAND researchers a platform to convey insights based on their professional expertise and often on their peer-reviewed research and analysis.