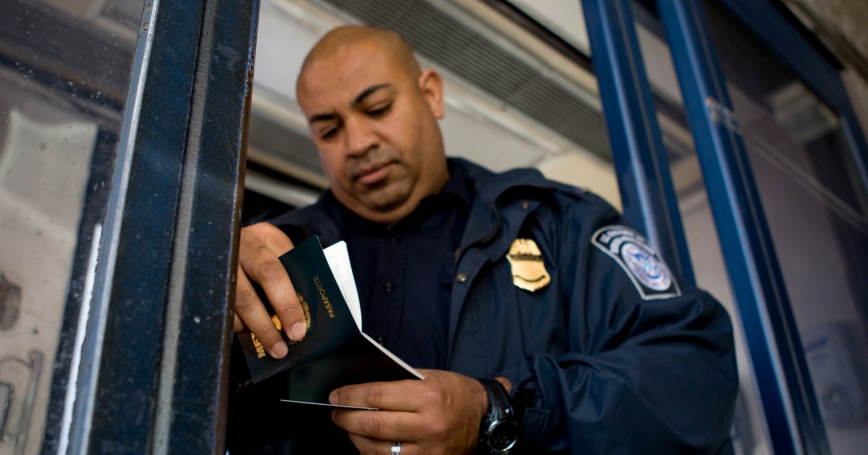 Customs and Border Protection officer Ballard inspects a motorist's passport at the San Ysidro border crossing between Mexico and the U.S. in San Ysidro, California

by Daniel Gonzales and Laura Patton

Better securing the border against the flow of illegal drugs is both challenging and expensive. The border is long and easily crossed in remote areas. Providing effective surveillance of the U.S. southern border requires new thinking and new technologies if it is to be done in a cost-effective way. Is there a way to use new Department of Defense (DoD) technology to help meet this objective?

DoD has developed new sensor technologies to support military forces operating in Iraq and Afghanistan that may be useful in counterdrug operations along the southern U.S. border. In fact, DoD has held technology demonstrations to test and demonstrate new technologies along the southern border, because the field conditions along the border closely resemble those in current military theaters of operation and because they can also reveal whether new technologies are useful for counterdrug operations led by domestic law enforcement agencies. So can both DoD and the Department of Homeland Security utilize this equipment for their missions?

Even though DoD has been designated in U.S. law as the lead agency for detection and monitoring of the movement of illegal drugs across the U.S. border by air and maritime means, there are legal questions about whether such technology demonstrations fully comply with U.S. law and whether advanced DoD sensors can legally be used in domestic counterdrug operations when they are operated by U.S. military forces.

RAND researchers examined federal law and DoD policy to answer these questions in a new report.

Reviewing relevant federal law and DoD policy, the authors conclude that there is no legal reason why a DoD sensor should be excluded from use in an interagency technology demonstration or in an actual counterdrug operation as long as a valid request for support is made by an appropriate law enforcement official and no personally identifiable or private information on U.S. citizens is collected. RAND researchers also offered several recommendations to better refine policy in this area:

Daniel Gonzales is a senior scientist and Laura Patton is a legislative analyst at the nonprofit, nonpartisan RAND Corporation.