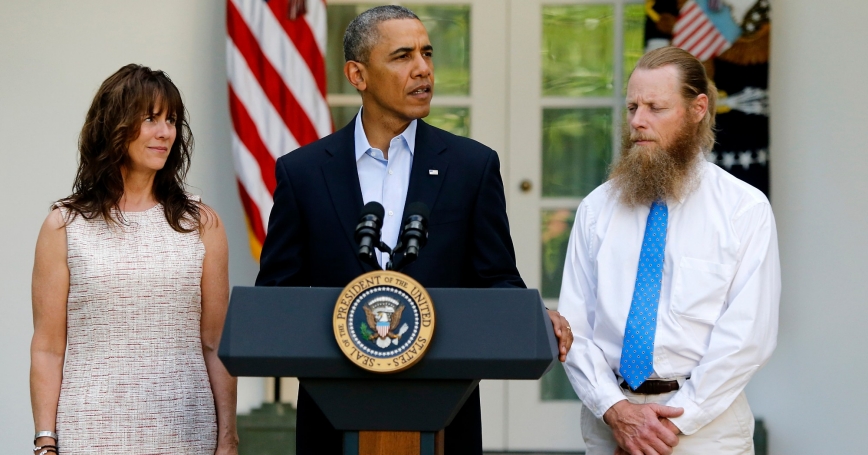 U.S. President Barack Obama stands with Bob Bergdahl and Jami Bergdahl as he delivers a statement about the release of their son, prisoner of war U.S. Army Sergeant Bowe Bergdahl, in the Rose Garden at the White House in Washington May 31, 2014

With U.S. Army Sergeant Bowe Bergdahl released after five years as a Taliban captive, the last known American prisoner of war is expected to return home shortly. The Taliban released Bergdahl, who was captured in Afghanistan in 2009, in exchange for five prisoners held at the U.S. detention center in Guantánamo Bay, Cuba.

While it's been many years since the United States secured the release of a POW via prisoner exchange, RAND's Jonah Blank, a former Senate Foreign Relations Committee staff member, reminded the Voice of America on Monday that such deals are nothing new:

“The United States has engaged in prisoner exchanges ever since the Revolutionary War … If [the United States] can have an exchange of prisoners with Nazi Germany and Communist North Korea, it doesn't seem to me that the Taliban should be off-limits.”

Blank also discussed mounting rumors and reports about the circumstances of Bergdahl's capture on Slate's The Gist podcast, noting that while these are legitimate topics of discussion, they're not relevant to efforts to rescue the POW and negotiate for his release.

This video is hosted by cnn.com. RAND is not responsible for any materials originating from this third-party server.

RAND's Seth Jones was in Afghanistan when Bergdahl was captured and assisted with early search-and-rescue efforts. He spoke with CNN on Monday about the potential cost of freeing Bergdahl:

“I think there's a high price for this. What we see across the board in North Africa, the Middle East, and South Asia is that kidnapping military officials and civilians works, because people pay in response, either through money or through prisoner swaps. The United States has demonstrated in this case that they will negotiate.”

Jones noted that America's willingness to exchange prisoners “reinforces the argument” that it profits for insurgent groups to take hostages. With Qatar officials agreeing to monitor the five released Taliban prisoners in their country for the next year, Jones also raised concerns about the future of these detainees:

“These five individuals now will go to the Taliban office, and I think … will get involved in Taliban strategic-level efforts from Qatar, at least for the next year and potentially back in [Afghanistan] after that.”

For timely insights on this and other stories as they evolve, follow Jones @SethGJones and Blank @JonahBlank.