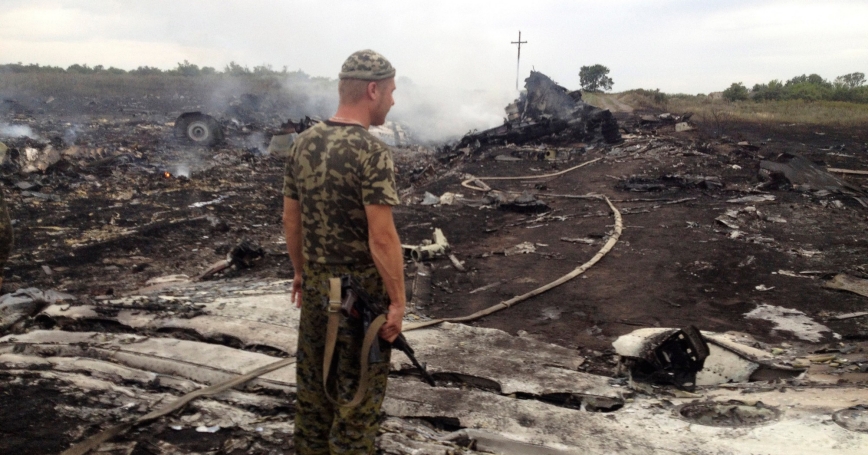 A pro-Russian separatist at the crash site of a Malaysia Airlines Boeing 777 in Ukraine's Donetsk region, July 17, 2014

Major news sources are now reporting that a radar-guided surface-to-air missile brought down Malaysia Airlines Flight 17. It is relatively rare that commercial aircraft become the target of weapons built primarily to attack military aircraft, but a range of potential threats to aircraft exist from weapons possessed by nation-states, terrorists and insurgent groups. Here is a description of some of the major classes of threats, the ranges and altitudes for which they are effective, and the entities that own these classes of weapons.

1) Man portable air defense systems: Known as MANPADS or shoulder-fired missiles, these can be carried and operated by individuals. Such systems are relatively inexpensive and can be found relatively easily in the international marketplace. Because of the low cost and portability, these systems have limited range and altitude, limited warhead size, and are guided by less sophisticated seekers than larger more expensive systems. They typically utilize infrared guidance, which target hot aircraft engines, or command guidance, which requires an operator to “steer” the missile onto the target. These missiles tend to have an operational ceiling of 10,000 to 15,000 feet, so commercial aircraft are typically vulnerable only during the takeoff and landing phases of their flights.

It should be noted that even a successful strike may not necessarily result in the loss of the aircraft. In November 2003, a DHL Airlines Airbus 300 was damaged by a man portable air defense system while flying near Baghdad International Airport, yet managed to land safely.

2) Fixed or vehicle-mounted Surface to Air Missiles: Larger surface-to-air missiles, known as SAMs, are typically fixed or vehicle mobile and many of these systems utilize radar-guidance to engage their targets. The range of these systems varies widely, from tens to hundreds of miles for modern systems, and many of these systems are capable of engaging commercial aircraft at altitudes experienced throughout their flights. In addition, the warhead size is typically large enough to successfully bring down commercial aircraft. Because of the costs of procuring and operating these systems and their complexity, it is typically only nation-states that possess them.

Iran Air 655 is an example of a commercial aircraft that was brought down by such a weapon. The Airbus A300 was engaged and shot down by a U.S. Navy Surface to Air Missile after a case of mistaken identity in 1988.

3) Fighter aircraft: Many fighter aircraft are equipped with air-to-air missiles. A variety of seekers are used, with the most popular being radar and infrared. While a large number of countries possess fighter aircraft, successfully performing an air-to-air engagement is a task that requires a highly trained crew. The cost of procuring and maintaining fighter aircraft capability is relatively high. Most modern fighter aircraft manned by a skilled crew would have little problem engaging a commercial aircraft during most phases of its flight.

In 1983, Korean Air Lines Flight 007 was shot down by a Soviet fighter after straying off course.

Given that Malaysia Airlines Flight 17 was reportedly at 33,000 feet when contact was lost, it seems impossible that the attack could have occurred using a shoulder-fired missile. President Barack Obama echoed the earlier comments of U.S. Ambassador to the United Nations Samantha Power, who said the U.S. government believes that the attack was carried out using a medium range, mobile SA-11 Surface to Air Missile system.

Carl Rhodes is director of the Force Modernization and Employment Program within Project AIR FORCE at the nonprofit, nonpartisan RAND Corporation.

This commentary originally appeared on U.S. News & World Report on July 18, 2014. Commentary gives RAND researchers a platform to convey insights based on their professional expertise and often on their peer-reviewed research and analysis.