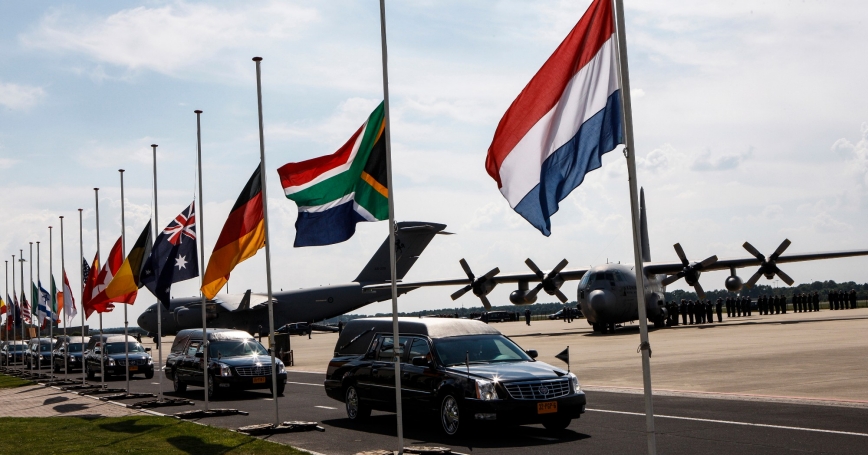 A convoy of hearses bearing the remains of the victims of Malaysia Airlines Flight 17 leaves Eindhoven airport in the Netherlands, July 24, 2014

Until a missile shot down a Malaysia Airlines jet over eastern Ukraine killing all 298 people aboard, the crisis in Ukraine may have seemed to be another flashpoint in a world confounded by conflict. But the downing of flight MH17 all too vividly demonstrated that the conflict in Ukraine poses wider risks.

As tragic and senseless as the attack was, this newly demonstrated danger to outside innocents is just a part of the broader, longer-term threat posed by the crisis in Ukraine. Along with the threat of expanding regional violence, the conflict also jeopardizes security in Europe and America's global interests.

Recently, during a discussion session with a panel of RAND Russia-Ukraine experts, an audience member apologized for asking a possibly “naïve” question: “Why should Americans care about the fate of Ukraine anyway?” The experts leaned forward eagerly. It was a question — hardly naïve — that they have been examining for years. The short answer, posited by David Ochmanek, whose background includes more than five years in the U.S. Office of the Secretary of Defense, was that a stable Ukraine is important to the “prosperity and security of Europe, (which) is fundamental to our own prosperity and security.”

Indeed, since the disintegration of the Soviet Union in 1991, RAND research has consistently stressed the importance of U.S. engagement to protect NATO's eastern flank and to stabilize the regions adjoining NATO. The latest challenge to these goals is the crisis in Ukraine and Russia's continuing efforts to block Ukraine's integration into the West.

To promote and protect security and democracy in Ukraine, the United States and its NATO allies must first seek to end the conflict in eastern Ukraine, where Russia-backed separatists are at war with the fledgling government in Kiev. At the same time, the United States and Europe should maintain a focus on longer-term goals, such as political and economic reform and strengthening ties among Ukraine, the European Union and, yes, NATO, even if that does not mean formal NATO membership for Ukraine.

To end the unrest and promote internal stability in the near term, the United States and Europe should continue to expand pressure, including sanctions, aimed at convincing Russia to abandon its tactics of coercion and destabilization in Ukraine. The United States should also continue providing aid and otherwise cooperating with the new government in Kiev.

If Russian President Vladimir Putin thought that exerting muscle in Ukraine was a path toward renewed global respect for Russian power, he miscalculated. Putin's stubbornness on Ukraine has attracted international condemnation and scorn, threatened Russia's already shaky economy, and focused NATO anew on the need to counter potential Russian aggression. It has also sparked a surge in anti-Russian and pro-NATO sentiments in Central and Eastern Europe. The tragic loss of a commercial aircraft and its innocent passengers only intensifies these sentiments.

The United States and its allies should continue efforts to show Russia that incursions into Ukraine will not boost its global respect or influence but will, in fact, have the opposite effect. The exclusion of Russia from the G-8, now the G-7, group of industrial nations and the imposition of targeted economic sanctions are a good start. Engagement with the government of Ukraine's newly elected president, Petro Poroshenko, is key. This kind of cooperation, including direct aid, can send a signal to the Ukrainian people, and to Moscow, that the United States sees the region as a priority and that it pledges solidarity with an independent Ukraine.

The United States currently provides Ukraine with $120 million per year through Foreign Operations Appropriated Assistance to promote democratic institutions, expand market reforms and build relations between Ukraine and Europe. Wisely, the United States has been boosting aid to Kiev since the spring, including a $1 billion loan guarantee, $50 million for crisis response, $23 million for security assistance and $48 million for economic and constitutional reforms. In a statement issued in Poland in June, President Barack Obama cautioned Russia against further provocative actions and announced $1 billion in security aid to NATO nations in Central and Eastern Europe.

With the help of the United States and Europe, Ukraine can emerge as the democratic and independent nation that the majority of its people and the West envision. And stability could pave the way to regionally significant goals that seem distant today, such as Ukrainian integration with the European Union and with NATO, at least as a close partner in the latter case, if not as a full-fledged member.

This commentary originally appeared on U.S. News & World Report on July 25, 2014. Commentary gives RAND researchers a platform to convey insights based on their professional expertise and often on their peer-reviewed research and analysis.