Further Observations on the Situation in Iraq 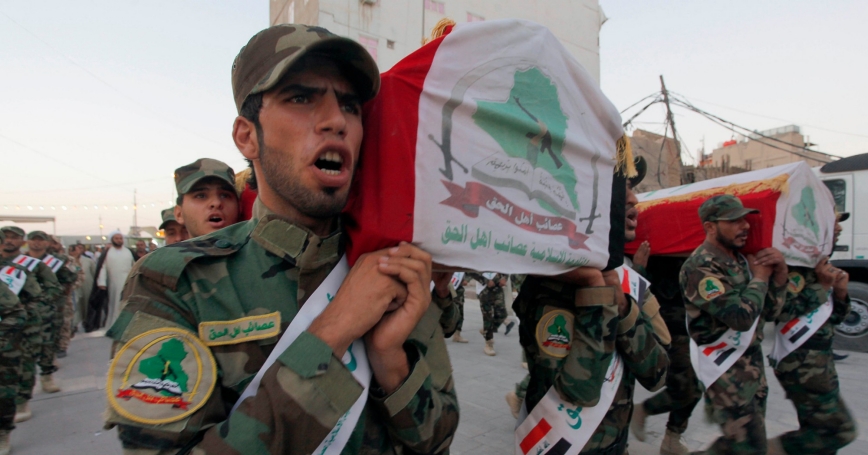 Members of Shi'ite group Asaib Ahl al-Haq carry coffins of fighters killed in clashes with the Islamic State of Iraq and the Levant (ISIL), July 7, 2014

What happened in Iraq should not have been a surprise. The current situation in Iraq inevitably followed as President Nouri al-Maliki set upon a course of Shi'a domination and Sunni exclusion. Although some were surprised by the collapse of Iraq's military, it is obvious that the security situation in Iraq had been deteriorating for some time. Al Qaeda and the Islamic State in Iraq and Syria (ISIS) have been carrying on a relentless campaign of bombings, assassinations and military operations for at least two years.

ISIS's rapid advance in Iraq had less to do with its military strength, more to do with the collapse of the Iraqi army. Maliki reportedly replaced competent military commanders with personally loyal supporters. Now faced with a national crisis, which threatens his own political survival, he is not likely to broaden his political base, as the United States would like, or install military leaders upon whose personal loyalty he cannot depend. That is not the way authoritarian leaders operate.

ISIS's advance predictably slowed as it neared Baghdad. This is the edge of Sunni territory where Shi'a resistance stiffens. Iraq's Sunnis may dislike ISIS's extremism, but they have little incentive (and no resources) to defend the government. Iraq's Shi'a have existential reasons to fight, underscored by ISIS's deliberately publicized massacre of Shi'a soldiers and destruction of Shi'a mosques. Shi'a military units and militias have rallied. Iranians are providing assistance. This is now an all-out sectarian civil war.

ISIS's announcement of a caliphate is propaganda aimed at its own home front. It changes nothing on the ground. ISIS's declaration eclipses the authority of al Qaeda leader Ayman al Zawahiri, who earlier this year expelled ISIS from al Qaeda, and asserts ISIS's own leadership over the global jihadist enterprise. Some elements of al Qaeda had already been leaning toward ISIS; others may now follow. The caliphate will attract recruits worldwide, which ISIS now desperately needs. It will attract funding from wealthy private donors who will see the declaration of an Islamic state as the first step in restoring past glory and who will be pleased by the visible destruction of Shi'a mosques. Al Qaeda's central leadership can rail at this; but, lacking anything more than rhetorical artillery, it is more likely to adjust in a way that saves some pretense of authority.

Iraq has been and will remain partitioned for the foreseeable future. ISIS's fighters are spread thin over a large, sparsely populated area of Syria and Iraq, hence its recruiting drive. Nonetheless, ISIS does control Mosul; and, as was seen in previous battles in Fallujah and other Iraqi cities during the American occupation, combat in urban areas is difficult and destructive. The Iraqi army does not appear to have that kind of capability, which means that Mosul and other large towns may remain in ISIS's hands for a long time. Meanwhile, Kurdish forces have expanded and will defend their independent enclave not only against Sunni extremists, but also against any effort by Baghdad's forces to retake Kirkuk. As a matter of principle, the United States may remain committed to Iraq's territorial integrity, but the reality will be otherwise.

Maliki may adopt Syrian President Bashar Assad's brutal tactics to destroy ISIS. Lacking the military power to root out ISIS and retake cities it now holds, Baghdad, with direction and assistance from Iran and Russia, may instead opt for Syria's strategy of making life untenable in zones not under government control. This means the promiscuous use of artillery and air power to bombard cities and destroy infrastructure, commerce, food production and healthcare. This could drive the civilian population out of the area, leaving ISIS's fanatics in control of nothing but rubble. It is ruthless and ruinous, but in Syria it has weakened the rebellion. Syrian aircraft already are carrying out bombing runs in Iraq. America's concerns about ISIS and its willingness to assist Iraq cannot lead to association with this kind of scorched earth campaign.

The United States ought to remain cautious about intervening in Iraq. Initially alarmed by ISIS's rapid advance and facing calls for immediate action, decisionmakers in Washington seemed propelled by the weight of history to do something without having a clear idea of what objectives could realistically be achieved. After investing so much blood and treasure in Iraq, American decisionmakers simply carry too much baggage and have too many biases. Clarity about what is going on and where American interests lie is still badly needed in the national discussion. Some argue that doing nothing in Iraq is bad because ISIS will be able to establish a stronghold from which to attack the United States. But it is difficult to see how the United States can favorably affect the situation in Iraq without making a costly and risky investment.

That does not mean doing nothing. An immediate objective is to contain the conflict. Jordan, Saudi Arabia, Kuwait and Israel are directly threatened by the fighting in Syria and Iraq. Saudi Arabia faces an additional threat on its southern border from al Qaeda's affiliate in Yemen, which includes some ISIS supporters. Iraq's adoption of a Syrian strategy will add huge numbers of Iraqi refugees to the millions who already have fled Syria, creating a humanitarian crisis and new threats to the stability of the region. What the United States does in Iraq must be consistent with U.S. efforts in Syria, where Washington is still attempting to propagate and arm a less extreme alternative to ISIS that can protect the Sunni population and more effectively challenge the Assad regime. This is a long-term project and may not work, but in the meantime it may at least give the United States some local allies.

Jenkins is the senior adviser to the RAND Corporation president and the author of Al Qaeda in Its Third Decade: Irreversible Decline or Imminent Victory? and the commentary “Generations of Terrorism.”

This commentary originally appeared on thehill.com on July 14, 2014.