Gaza and the Nuclear Negotiations 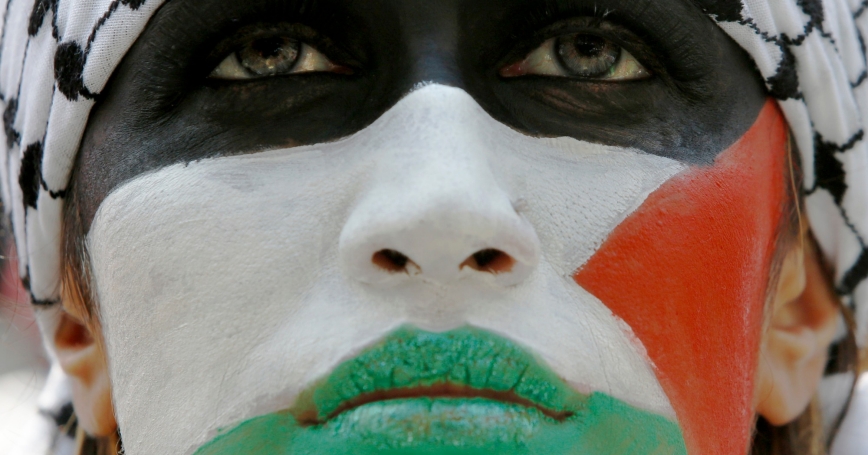 A demonstrator, her face painted in the colors of the Palestinian flag, outside the Israeli Embassy in London, July 26, 2014

Back in November, when the P5+1 negotiators (the five permanent members of the United Nations Security Council plus Germany) reached an interim deal to curb Iran's nuclear program, Israeli Prime Minister Benjamin Netanyahu attacked it as a “historic mistake” that would make the world “a much more dangerous place.” Last week, the negotiators failed to reach a final accord and instead extended the negotiations by four months. This time, however, there was hardly a peep from Netanyahu.

Netanyahu's muted response may seem surprising given his previous vocal and public rebuke of the talks. Some might say that the escalating conflict in Gaza has distracted the Israeli leadership; one Israeli headline even suggested that “Netanyahu wanted to attack Iran, but got stuck in Gaza instead.” For his part, Netanyahu made it clear that Israel prefers no deal to a bad deal, which also might help explain his relatively subdued response to the extension of the talks. Yet Hamas has not replaced Iran as Israel's top security challenge in Netanyahu's mind. If anything, the Gaza conflict is likely to exacerbate his concerns about Iran and may make the ongoing nuclear negotiations, already tenuous, even more difficult to conclude.

U.S. negotiators have tried to compartmentalize regional issues involving Iran during the talks, for example, by avoiding topics such as Iranian missile development, its links to terrorist groups, its human rights abuses. The Iranian negotiators have also made it clear that they do not have a mandate to discuss broader regional issues such as Syria and Iraq with the Americans, and are interested in keeping the nuclear talks separate from everything else. The logic is that doing so will enhance the prospects of reaching a deal, particularly when the nuclear discussions are already complex enough on their own. However, such segregation is nearly impossible in practice; crises like the one in Gaza affect the calculations of all the parties in the nuclear negotiations as well as the stance of states that, like Israel, are not party to the talks but have a significant stake in their outcome.

Indeed, for most Arab states as well as for Israel, concerns about Iran have always extended well beyond the country's nuclear program. For some governments, Iran's regional ambitions, its relationships with Shia groups in neighboring states, and its links to terrorist entities across the region are more alarming than its quest for nuclear capabilities. Even for Israel, the main concern is not that Iran would necessarily use nuclear weapons against it, but that Tehran's capacity to do so would embolden it in these other arenas. That is unacceptable to Israel given Iran's longstanding support for Hezbollah in Israel's north and its more sporadic financial and military support for Hamas and other Palestinian militant groups in Gaza. So, when a conflict emerges that underscores Iran's regional reach — like the one in Gaza — Israeli leaders' stance regarding Iran's nuclear program is likely to harden.

And Israel has little doubt that Iran's fingerprints are all over the conflict in Gaza. Although Iran suspended its support for Hamas after the organization backed the uprising against Syrian President Bashar al-Assad, Israeli officials and other analysts believe that the support it previously gave the group allowed it to wage these attacks. For example, although most of Hamas' rockets are now locally produced (thanks to the suspension of Iranian assistance and the Egyptian crackdown on Hamas smuggling routes), some of the rocket parts and the technical know-how for production and training are widely believed to have come from Iran. Once the dust settles, this Iranian link to a war on Israel's borders is likely to attract increased attention.

For his part, Netanyahu has already made the connection: “Hamas and Islamic Jihad are being financed, armed and trained by Iran…This Iran cannot be allowed the ability to produce fissile material for nuclear weapons. If this happens, the things we are seeing around us and the things that are happening in the Middle East will be far worse.” A senior U.S. official involved in the nuclear talks echoed that sentiment, telling reporters in Vienna that “Iran has a responsibility to cease and desist from continuing to supply weapons of war that are fueling this conflict.” The same concerns are likely to be shared in the U.S. Congress, which will find it hard to lift sanctions on Iran as long as it believes that Iran has enabled Hamas to attack the United States' main ally in the Middle East.

Meanwhile, U.S. negotiating partners, particularly France with its tough nonproliferation agenda, may become even more suspicious of Iran's seriousness about implementing any nuclear deal. After all, Gaza is a reminder that Iran has broken UN embargos, which has helped fuel conflict in the region. A UN report in June 2014, for example, concluded that the rockets and other arms intercepted by the Israelis in the Red Sea originated from Iran; Israel claimed that the weapons were headed to Gaza. This report did not garner much attention at the time, but in the aftermath of the Gaza conflict, it may receive more consideration.

Finally, public pressure within Iran may only lead to Tehran's increased support for Palestinian militant groups, given the broad consensus condemning Israeli aggression and the leadership's recognition that these conflicts can help rehabilitate Iran's regional image as a leader in the resistance against Israel. Iranian leaders may find particular value in bolstering support for Hamas, despite the previous rift over Syria, to dampen sectarian tensions that challenge Iran's broader regional ambitions. As if to prove the point, on July 14, Supreme Leader Khamenei tweeted: “The massacre in #Gaza by Zionists should #awaken Muslim govts & nations 2stop discords & get #united.” Increased support for Gaza militants, in turn, would fuel international resistance to a nuclear deal that results in sanctions relief for Iran.

To be sure, both the United States and Iran have compelling reasons for reaching a successful nuclear deal, which will push them to continue working toward one despite the ongoing developments in Gaza. For the Obama administration, settling the Iran nuclear question through diplomacy would be a major foreign policy achievement and would remove one problem in a region already roiled with conflict. For Iran, Khamenei still backs negotiations toward a deal that would bring desperately needed sanctions relief. Whether a formula can be reached that meets Iranian demands for a civilian nuclear program, but is limited enough to satisfy the United States and its partners remains to be seen. But the longer the Gaza conflict continues, the harder it will be to insulate the negotiations from broader regional trends — and that does not bode well for a successful outcome.

This commentary originally appeared on Foreign Affairs on July 27, 2014. Commentary gives RAND researchers a platform to convey insights based on their professional expertise and often on their peer-reviewed research and analysis.