Good Guy Gamble: What to Expect from Indonesia's Jokowi 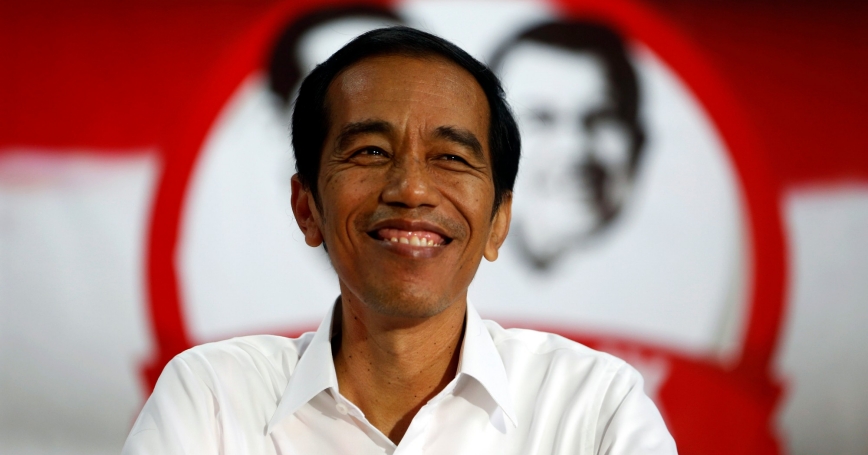 At least that was the preliminary verdict of the nation's presidential election on July 9. And that could be good news for Indonesia — and also for Southeast Asia, the United States, and the world. The “could,” of course, comes with two big caveats: The initial results must be borne out by the final tally (due by July 22) and the losing candidate must accept that he has lost.

In many other countries, electoral contests seem to degenerate into weary struggles between uninspiring and barely-distinguishable candidates, with voters selecting whichever personality they consider marginally less bad. Not so in Indonesia, where both rivals inspired deep-seated enthusiasm. And the differences between the two could hardly have been starker.

Joko Widodo, who is leading in most early counts, is the administrator of the sprawling capital city of Jakarta. His humble background, a plus for his poorest constituents, and an impressive track record as a can-do technocrat, which played well with middle-class voters, put him up by nearly 40 points in early opinion polls. Jokowi (as he is universally known) promised to bring the same humility, incorruptibility, and get-it-done outlook to the national stage. Prabowo Subianto, his opponent, is his polar opposite: A multimillionaire scion of an old-regime dynasty, former son-in-law of the deposed dictator Suharto, and a hard-line general who was cashiered from the army for kidnapping and torturing democracy activists. He has promised to bring military decisiveness to the public arena. The outgoing president, Susilo Bambang Yudhono, is himself a former general, however, and many voters are frustrated with his perceived lassitude and indecisiveness.

Prabowo was down in the polls throughout most of the campaign, but on election day, the contest was too close to call. And even if Jokowi does win (preliminary tallies predict that will happen by a narrow margin), Prabowo is not guaranteed to go quietly. The stakes could hardly be higher: Since the fall of Suharto in 1998, Indonesia has been a showpiece of democracy in Asia. The final count will either solidify this narrative, or toss it right out the window.

For the past four months, the election had all the makings of a feel-good story. Jokowi was seen as ushering in a bold new era of politics untainted by the corruption, nepotism, and mismanagement of the past. He would be the nation's first leader without close ties to the old order; the four presidents since the end of military rule have included a former general, the daughter of the country's founding dictator, an accommodating blind cleric, and a factotum so enamored of his ousted boss that he commonly referred to himself as “SGS” for “Super-Genius Suharto.”

Although most of Indonesia's political class comes from a narrow set of intertwined business and military families, for years Jokowi earned his living as a simple furniture salesman. He entered politics in 2005 at the age of 44, when he was elected mayor of his hometown of Solo. During his seven years in office, he cleaned up the city's sewage-clogged canals and its graft-clogged bureaucracy. Before he took office, the city had a reputation as a hotbed of Islamist radicalism; on a visit there three years before Jokowi's tenure, I saw posters of Osama bin Laden prominently displayed in the central bazaar. But despite the ideological climate, Jokowi's administration was impartial toward all communities and was staffed by officials from all faiths and backgrounds. Whether as a result of this outreach or not, extremism is far less evident in Solo today.

By 2012, Jokowi's success in Solo had drawn so much national attention that his party nominated him as its candidate for governor of the capital district, Jakarta. He won, and brought the same attitude of punya gaye (“can-do”) to the famously unmanageable megalopolis. As he had in Solo, the new governor improved infrastructure and public transportation, cleaned house on corrupt bureaucrats, and introduced basic health care for all citizens. His approach relied on blusukan, which can be loosely translated as “exploration” and involved walking around the city without a large retinue and having informal conversations with ordinary constituents. That may seem like Politics-101, but in the stultifying atmosphere of Indonesian officialdom, it was revolutionary.

A counter-revolution, however, was already brewing.

Under the rules of the ancien régime, Prabowo might have been marked for national leadership from the time of his birth. His grandfather was the founder of the Bank Negara Indonesia, still a cornerstone of the nation's financial system. His father served as Suharto's trusted minister for trade from 1968 to 1973, during which the family's personal wealth and political stature grew to even loftier heights. Prabowo himself used his close ties to the nation's financial and military kingmakers to rise through the army ranks.

Prabowo first sought to gain full control of the country the old-fashioned way: by attempting a military coup. In 1998, as Suharto's grip was slipping in the face of popular protests, Prabowo tried to use his position as commander of the army's Kostrad unit (the 27,000 strategic reserve, which is headquartered in the capital) to stake his claim as the successor. Kostrad had been Suharto's own launchpad for the coup that brought him to power in 1965, and Prabowo saw the unit as a means of leapfrogging rival generals onto his patron's throne. A military panel later ruled that he had “intentionally misinterpreted” his orders, and had directed the kidnapping of pro-democracy activists. Prabowo, who received U.S. military training, is said to have admitted to torturing the protesters, but claimed he did so on Suharto's instructions; he was dismissed from the army, and went into voluntary exile in Jordan.

The charges that ended Prabowo's military career were not the first allegations of flagrant human rights abuse to be leveled against him. As a young lieutenant in the special forces serving in East Timor shortly after Indonesia's 1975 occupation of the former Portuguese colony, Probowo led a unit that caught and executed the briefly independent nation's first prime minister. During the 1990s, moreover, he conducted “dirty wars” in both Papua and East Timor; the latter campaign was given the name, “Operation Eradicate.” And in 2000, Prabowo became the first individual to be refused entry to the United States based on the United Nations Convention on Torture.

For a few years, Prabowo contented himself with amassing unimaginable amounts of money; his personal fortune is said to be about $150 million. The fortune of his younger brother, whose business empire Prabowo joined during his time in exile, is estimated at over $1 billion. This bottomless pool of funds, and a cozy relationship with key barons of media, industry, and military establishments, permitted Prabowo to try again for the presidency, this time as a civilian in 2004. He did not fare well, and spent the next decade solidifying his position as the candidate of the Suharto-era revanchists.

In that time, he also made some unlikely allies: conservative Islamists. The courtship appears to be one of convenience, since Prabowo's rhetoric and personal convictions have always focused on nationalism rather than religion. When the 2014 race boiled down to two candidates, smaller parties scrambled to choose sides. Prabowo received the endorsement of Golkar (the principal party of the Indonesian military) and four key Islamist political parties in May. One of them, the Justice and Prosperity Party (PKS, for its Indonesian name Partai Keadilian Sejahtera), draws its inspiration from Egypt's Muslim Brotherhood, has staged rallies in support of Hamas, and advocates an ideology akin to that of the terrorist group Jemaah Islamiyah.

Over the years, Prabowo also become a master of a certain kind of politics: Among the more effective tools he employed (or those used by shadowy forces operating on his behalf) has been a smear campaign trying to turn Jokowi's inclusive, tolerant, and broad-based approach against him. Because Jokowi reached out to members of all religions — even as mayor of Islamist-leaning Solo — he has been labeled a closest Christian. Because he sought to assuage the fears of Jakarta's significant and often-oppressed community of ethnic Chinese, he has been derided as the descendant of Chinese migrants. Because he has focused on providing government services to the poorest members of society, he has been branded a Communist — a dangerous allegation, given that up to half a million suspected Communists were killed in the bloodbath preceding Suharto's ascension to power. The charges were all baseless: Jokowi is a secular Javanese Muslim (Prabowo's brother, interestingly enough, is a convert to Christianity), but the slander took its toll, and Jokowi saw his comfortable lead evaporate.

Even so, as mysteriously funded tabloids portrayed Jokowi as a Pinocchio-nosed liar, a citizen of Singapore, and the red-diapered-baby of a Communist-activist mother, the candidate treated the wild allegations as too ridiculous to merit a response. As far back as mid-May, social media sites began circulating photos of what they claimed to be Jokowi's marriage certificate — a document in which the groom is identified as a Chinese Christian. Jokowi ignored the campaign for weeks before calmly dismissing the certificate as being fraudulent. After the “black campaign” began, Jokowi selected a moderate Islamist, Jusuf Kalla, as his vice-presidential running mate; in a last-minute bid to further establish his religious credentials, he spent the final days of the race on a brief pilgrimage to Mecca. In the end, the election may well depend on whether Jokowi is too nice for the job — whether his unwillingness to respond to dirty campaigning with dirt of his own makes him a new breed of politician, or merely political road-kill.

Indeed, stylistic differences between the rival candidates are extreme. When Jokowi attended a Metallica concert in September (Jakarta's governor is a passionate metal-head), he insisted on standing in the general mosh pit rather than in the VIP section. Meanwhile, when Prabowo announced his candidacy for president, he entered a rented stadium by helicopter, then rode to center-stage on a $300,000 show horse. But the differences of substance are far more important than those of demeanor. Whereas Jokowi based his entire political program on empowering ordinary citizens and bringing government services to under-served communities, Prabowo openly questioned the value of democracy itself. He is said to have advocated a return to the “guided democracy” of Sukarno, the first military dictator to govern Indonesia. A mere 15 years after the fall of the nation's second unelected strongman, Suharto, Indonesia's status a true democracy may well depend on whether the early estimates of the July 9 vote prove accurate.

The battle between Prabowo and Jokowi is a contest between an old order longing for past certainties and a newborn one still tottering on young legs; an elite network based on cronyism and outrageous wealth and the overwhelming majority of Indonesians who are poor or middle-class; a desire for retrenchment and a plea for reform. Reform will win. Perhaps in the coming weeks, perhaps further down the road. When Indonesia's last dictator was unceremoniously evicted from his palace, the unifying chant heard throughout the country was a single Bahasa word: Reformasi.

Jonah Blank is a senior political scientist at the RAND Corporation and author of Arrow of the Blue-Skinned God and Mullahs on the Mainframe.

This commentary originally appeared on Foreign Affairs on July 17, 2014. Commentary gives RAND researchers a platform to convey insights based on their professional expertise and often on their peer-reviewed research and analysis.