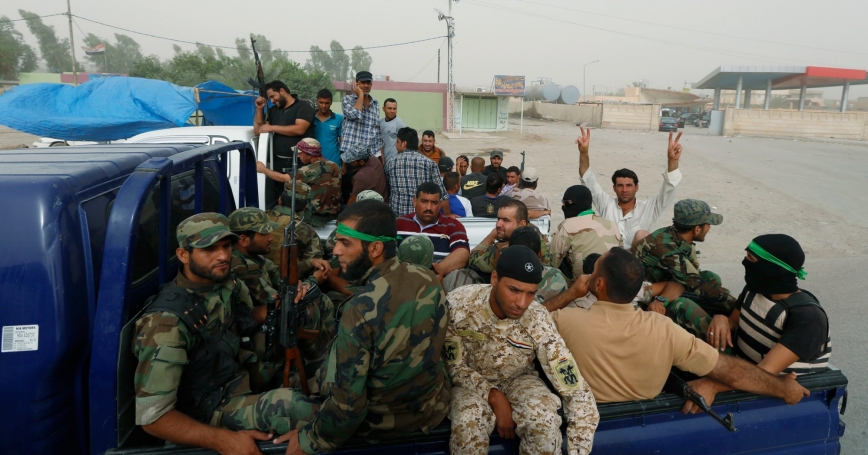 Followers of radical cleric Muqtada al-Sadr, who fought U.S. troops under the banner of the Mehdi Army during the 2003-11 occupation, have returned as Sadr's new "Peace Brigades"

Politics makes strange bedfellows, especially in the shifting sands of the Middle East. This has never been more true than it is right now in Iraq, where the United States faces a complex strategic challenge that is blurring the lines between friend and foe. In seeking to quell the unrest, the United States must balance its own interests with those of a diverse cast of players that includes Iraq, Iran, Russia, Saudi Arabia, an unpredictable and violent jihadist front and others.

There are multiple layers to the conflict in Iraq: jihadists versus the government, Sunni versus Shiite, Iran's regional ambitions, Saudi Arabia's need for security and Russia's desire to supplant U.S. influence in the region. The United States has sent 300 military advisors to assess the situation on the ground — a prerequisite to any deeper military involvement. An additional 200 have been sent to protect American diplomats — a wise precaution after the deadly 2012 attack on the U.S. embassy in Benghazi. Iraq's Prime Minister Nouri al-Maliki has asked for U.S. military help, meaning he wants the United States to bomb the jihadists who hold Mosul, Fallujah and other towns.

American military intervention in Iraq would put U.S. forces on the same side as Iran, a hostile country that has long been the target of U.S. sanctions for its suspected development of nuclear weapons; Russia, a global rival which has also been the target of U.S. sanctions as a consequence of its actions in Ukraine; Syria, a country whose government the United States opposes and where it is backing rebel Sunni forces; and the same Shi'a militias that previously devoted themselves to killing American soldiers during the U.S. occupation.

Providing assistance to Iraq could mean Americans bombing or shooting at Sunnis. This is a group that includes dangerous jihadists who threaten America with terrorism, but also former insurgents who just eight years ago switched sides to assist U.S. forces against other jihadist extremists. While al-Maliki has asked for American military assistance, both Iraq's vice president and the leader of Iraq's major Shiite militia have warned the United States to stay out.

Military assistance does not guarantee commensurate influence. The Iraqis would run their war with Iranian, Russian and Syrian assistance. The United States could end up in the thick of fighting, but at the margins of determining how the war will be fought.

In other words, U.S. forces, while carefully trying to target genuine jihadist fighters mixed among and hiding behind civilians, could find themselves the targets of America's current enemies, its former enemies, some former allies, and almost certainly some of the very people they are trying to help.

To make helping Iraq a bit more palatable, the United States is urging al-Maliki to broaden his government, advice he will undoubtedly reject since that would require a dilution of his power. Al-Maliki wants American bombers, not American political advice.

Still, convincing the Iraqi government to be more inclusive would be a good first step. Next, the United States needs to find a way to create a delicate balance among it friends, enemies and rivals in a conflict that is as complex as it is confounding.

This commentary originally appeared on U.S. News & World Report on July 15, 2014. Commentary gives RAND researchers a platform to convey insights based on their professional expertise and often on their peer-reviewed research and analysis.