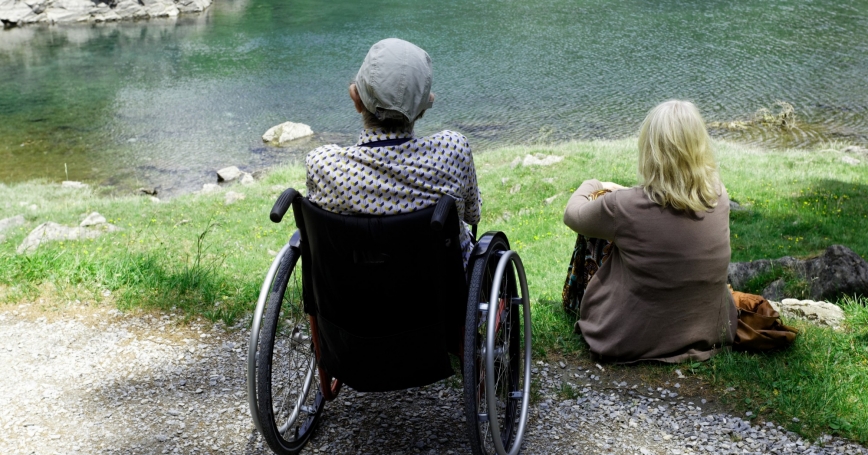 Photo by Herby (Herbert) Me / Fotolia

Across America, millions of people shoulder the all-consuming burden of providing care for loved ones who cannot care for themselves because of physical or mental conditions. The caregivers are spouses and friends, sons and daughters, moms and dads.

Among them are two expanding populations of Americans: those who care for military service members struggling with the physical or emotional wounds of war and those charged with looking after the rapidly increasing number of people with dementia. While these two groups may seem on the surface to have little in common, they face similar challenges, demand similar attention, and need similar help.

Combined, the two groups provide care worth billions of dollars—a cost that might otherwise have to be borne by the public. Both groups face incalculable financial stresses and threats to their own health as a result of their caregiving roles. And both have few places to turn for help.

There are an estimated 5.5 million military caregivers in the United States, RAND research shows. Of these, 1.1 million face a potentially decades-long road ahead caring for young post-9/11 veterans. Compared with non-caregivers, military caregivers experience more problems at work, greater family tension, and poorer health, problems that will grow only worse for those providing care over many years. Meanwhile, dementia caregivers face similar risks, and the reliance on their care only increases as dementia progresses, often irreversibly.

Thankfully, policymakers are beginning to recognize the seriousness of both problems.

Our recommendations to help empower military caregivers could go a long way toward easing the burdens of all caregivers, including those looking after loved ones with dementia. These include providing education and training to the caregivers, helping them access existing services for themselves as well as those they care for, expanding the provision of respite services that provide temporary breaks from caregiving duties, and boosting public awareness about the caregivers and their needs.

It would also help to create caregiver-friendly environments within health care settings and in the workplace. The federal government could take a broader role, particularly in helping those who care for military personnel. Support services across the government and private sectors should be integrated, coordinated, and expanded. Caregivers will need guidance to prepare for the long term, making the necessary financial and legal plans to ensure caregiving continuity.

As for dementia caregivers, RAND research issued last spring found that dementia already costs Americans hundreds of billions of dollars a year, and that the majority of dementia costs are attributable to long-term care—including the cost of caregivers' lost productivity and income—and not medical care. The number of dementia cases among those older than 70 in America is expected to rise from 3.8 million in 2010 to 9.1 million in 2040, and the annual costs of dementia could top half a trillion dollars by 2040.

Our latest dementia study offers a blueprint for improving long-term dementia services and support. It calls for providing better training, financial, and workplace support for family members who care for people with dementia; reducing the cost burden of long-term care on patients and their families; and promoting access to high-quality care for patients and caregivers alike through better assessments, improved coordination of care across settings, and expanded services in the home and community.

Our recommendations regarding both groups of caregivers overlap. Both groups provide a wide range of assistance to their ill or injured loved ones, in many cases help that would otherwise have to be provided through public services. Because of their service, both groups suffer lost wages and productivity—a multibillion-dollar drain on the economy. Both deserve continued attention and help.

This commentary originally appeared on The Hill on July 8, 2014. Commentary gives RAND researchers a platform to convey insights based on their professional expertise and often on their peer-reviewed research and analysis.