With the Death Toll Rising in Gaza, Is There Any Hope for Peace? 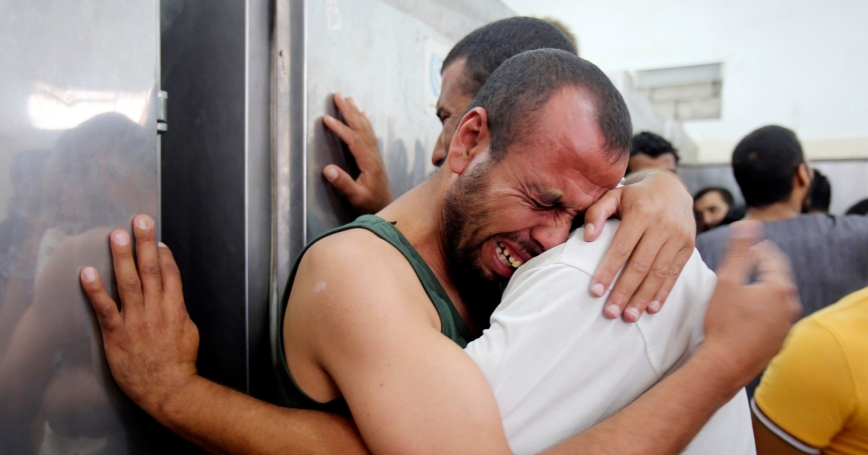 Palestinians mourn their relatives, whom medics say were killed by Israeli shelling, at a hospital morgue in the southern Gaza Strip, July 21, 2014

Casualties are rising in the conflict between Israeli soldiers and Palestinian militants in the Gaza Strip. After two weeks of fighting, reportedly more than 500 Palestinians are dead, including an unknown number of civilians, along with 25 Israeli soldiers—more than twice the amount killed in Israel's last ground offensive in Gaza five years ago.

RAND's Andrew Liepman spent more than three decades with the Central Intelligence Agency, where he worked extensively on Middle East issues. He also spent time in Gaza during active peace talks between Israelis and Palestinians. Liepman recently participated in a live chat hosted by the Los Angeles Daily News, where he discussed who could play middleman between Hamas and Israel, his expectations for peace in the region, and more. Here's an edited excerpt:

Is there any country in the Arab world that can manage negotiations between Israel and Hamas?

Liepman: Egypt under the Muslim Brotherhood and Mohamed Morsi was trusted by and a close ideological soulmate of Hamas, so they had some influence there. But it was one-sided, since the Israelis didn't have much time for Morsi, which limited Egypt's effectiveness and access. The new secular, military government in Egypt has less sway with Hamas, but I still think Egypt is the region's most important player when it comes to mediating between Israel and the Palestinians.

Liepman: Turkey was once so closely aligned with Israel that it had diminished credibility with the Arabs, although that has certainly shifted during the past years. I'm not sure the Turks have time for another seemingly irresolvable dispute, with Syria and Iraq to the south and Crimea to the north. Also, Turkey and Israel have grown quite distant. So Turkey has both less equity and less interest in being the mediator.

The United States, whether Americans like it or not, is the only country that can keep the two sides apart and hopefully bring them together some day to broker a settlement.

Is the conflict really “irresolvable?” Fifty years from now, will Palestinians and Israelis still be fighting?

Liepman: If only I knew. The pessimist in me sees only problems ahead, and there are a multitude of challenges. Every attempt at negotiating a two-state solution has failed, or at least stalled. We've come close, though. Perhaps the closest was in 2000, at the end of the Clinton administration. Ehud Barak put an offer on the table at Camp David that seemed to be at least the basis for a permanent solution, the beginning of tough negotiations. Yasser Arafat simply couldn't say yes at the time, and the second intifada, or uprising, started, leading to more separation, deep antagonism, Hamas's electoral victory in Gaza, and, ultimately, to the situation we have now.

However, we also can't lose sight of the fact that, as messy as things are today, there is a Palestinian entity. Progress has been agonizingly slow, but the fact that Palestinians have some modicum of independence is quite different from the days of airplane hijackings and bombings. There has been progress, but more than 20 years after the Oslo Accords, the toughest issues are still ahead of us.