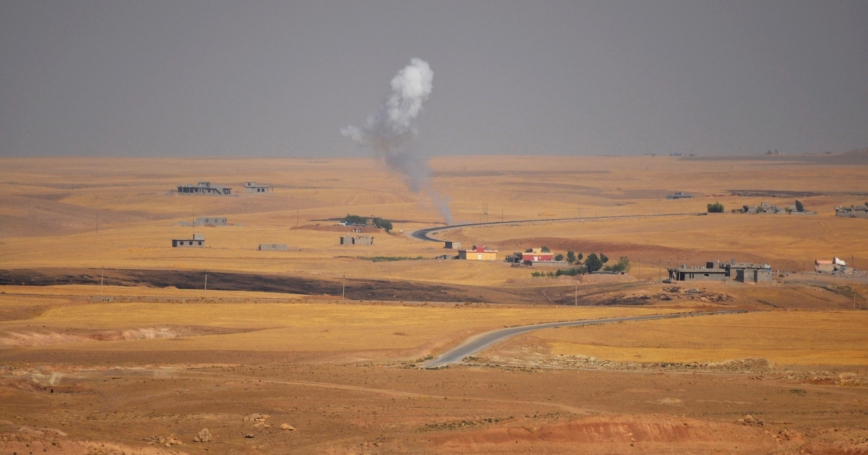 Smoke rises during clashes between Kurdish peshmerga troops and militants of the Islamic State, formerly known as ISIL, on the outskirts of Sinjar

But others will return to the United States and Europe blooded in battle, experienced in military operations and determined to recruit others to continue their violent campaigns at home.

Their return raises important questions of intelligence and prosecution strategy. But there is an even bigger question. Syria and Iraq provide safe havens where terrorists can train recruits, openly communicate, fire weapons, practice bomb-making skills, develop contacts for future operations and reinforce their commitment to jihad.

The bigger question, then, is how to disrupt those safe havens. The answer lies in a balanced approach that makes the business of terrorist planning and training difficult without entangling U.S. forces in new conflicts and angering the very populations the United States seeks to assist.

A purely defensive strategy is too dangerous, some argue, saying that the United States would be playing too close to its own goalposts by depending entirely on intelligence efforts to identify fighters returning from Syria before they arrive in the United States, or to detect their terrorist plots before they execute an attack. This line of reasoning suggests that the United States should take the fight to the Islamic State in Iraq and Syria (ISIS), preventing it from consolidating its safe havens by attacking its leadership in Iraq and Syria, disrupting its command and control, scattering its militants and degrading its operational capability.

President Obama has approved U.S. airstrikes in Iraq, but only in order "to prevent a humanitarian disaster and protect American citizens." Still, this will have the collateral benefit of assisting Kurdish fighters and indirectly Iraqi government forces. The initial attacks appear aimed at protecting refugees on Mount Sinjar and Erbil, a city in northern Iraq that has become a sanctuary for Yazidis, Christians and other religious minorities fleeing ISIS.

While limited airstrikes can create a defensive cordon, they will not by themselves be enough to cripple ISIS and disrupt its safe havens, just as drone strikes and special operations in Yemen have not ended al Qaeda in the Arabian Peninsula's terrorist campaign against the United States. But a more expansive use of airpower risks civilian casualties, especially in urban areas held by ISIS. This has led some to argue for a combat contingent on the ground — not a full-scale invasion, but something on the order of 10,000 troops.

The White House has been careful to portray U.S. military actions as limited to protecting refugees and American diplomats. It remains to be seen if commanders of ISIS will appreciate this distinction. They may well see U.S. actions as an infidel assault on Islam and launch terrorist operations in retaliation. Whatever ISIS decides, history suggests that U.S. military intervention abroad inspires jihadist recruitment and incites further attacks by homegrown terrorists. Terrorist attacks ordered by ISIS or inspired by events in Iraq will reinforce arguments for American escalation.

American military intervention, whether from the air or on the ground, puts the United States clearly on the side of a Shia-dominated government inflicting casualties on Iraqi Sunnis, probably few of whom are enthusiastic supporters of ISIS. These are the same people who once cooperated with the United States against al Qaeda extremists, and might be persuaded to do so again. As the conflict in Iraq becomes more sectarian, Iraqi government forces and jihadist rebels could victimize Iraq's Sunnis, just as Syria’s Sunnis have been victimized. Preventing ISIS from massacring Iraq's Yazidis, Christians, Shias and others it deems heretics is a noble immediate goal. Assisting Sunnis as well must be part of America's longer-term strategy.

Disrupting safe havens where terrorist-in-training are groomed for future attacks at times may require preemptive military action. But the United States cannot fix all of the failed states or eliminate all of the ungoverned spaces where terrorists can set up shop. That means the best approach is one that continues international efforts to quarantine conflict zones, maintain a hostile operating environment for terrorists, discourage foreign recruitment and identify returning fighters before they can act.

Jenkins is senior adviser to the RAND president and the author of Al Qaeda in Its Third Decade: Irreversible Decline or Imminent Victory?

This commentary originally appeared on thehill.com on August 18, 2014.