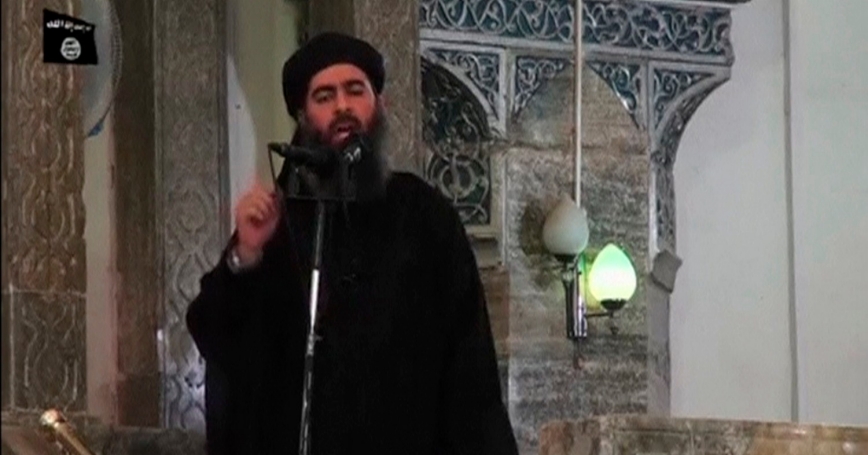 A man purported to be Abu Bakr al-Baghdadi, the reclusive leader of the militant Islamic State, allegedly in what would be his first public appearance at a mosque in Mosul, Iraq

When the Islamic State of Iraq and Syria poured out from the eastern deserts of Syria into Iraq's second-largest city last month, it was an image out of the eighth century: bearded Islamist marauders summarily executing unbelievers, pillaging as they went. But underneath that grisly exterior lurks something more modern and more insidious. As ISIS's most recent annual report shows, the group is sophisticated, strategic, financially savvy and building structures that could survive for years to come. ISIS currently brings in more than $1 million a day in revenue and is now the richest terrorist group on the planet.

Despite the recent calls from hawks in Congress for a broader offensive, there are few meaningful options available to the United States. There's no political appetite for a ground operation in Iraq. A narrower intervention, like the airstrikes and humanitarian assistance President Obama authorized last week, may be able to limit ISIS expansion, but will not defeat it.

Only the Iraqis and the Kurds will be able to reclaim territory. But there are some options for noncombat assistance that would help degrade the group's finances, which are strongly linked to the group's violence. For one, America could send expert teams to assist Iraqi and Kurdish forces in developing the financial intelligence needed to plan military operations against key ISIS elements. Targeting the terrorist group's bookkeepers, its oil business and its cash holdings could both disrupt ISIS's financing and provide additional intelligence on its inner workings.

Others have called for traditional counterterrorist methods to target ISIS's wealth — by disrupting international financial flows that support terrorism. But this view misreads how ISIS makes its money. The group has always raised and spent most of its money locally, inside Iraq and Syria. ISIS wants to create its own state, and has long raised funds like many nascent states do, through coercion and co-optation.

ISIS has long been financially self-sustaining. We have analyzed hundreds of ISIS financial documents captured by American and Iraqi forces since 2005, and we've found no evidence that ISIS has ever relied on foreign patrons for funding. Contrary to the common myth that the group relies on wealthy donors abroad, ISIS's meticulous records show that its money came mostly from protection rackets that extorted the commercial, reconstruction, and oil sectors of northern Iraq's economy. The group also made considerable money through war itself, plundering millions of dollars from local Christians and Shiites, whom ISIS views as apostates.

We believe that ISIS will remain financially solvent for the foreseeable future. A conservative calculation suggests that ISIS may generate a surplus of $100 million to $200 million this year that it could reinvest in state-building.

So how can America disrupt ISIS's financing? Since 9/11, the United States has focused mainly on international financiers sending money to Al Qaeda and its affiliates. The goal is to cut off terrorists' foreign sources of wealth. These policies are designed to encourage proper banking practices and bolster international customs enforcement, as well as to place terrorists and their associates on designation lists that block their travel and freeze their bank accounts.

Unlike many other terrorist groups, ISIS has never relied on the largess of foreign patrons. ISIS documents warn against it, because many terrorist groups that ceded influence to foreign benefactors were devastated when patrons stopped sending money. “Make your dog hungry,” one ISIS strategist wrote, “and he will follow you.”

America's post-9/11 approach to blocking terrorist financing will not be effective against ISIS because the group uses money as an instrument of statecraft. Its leadership has established institutions that administer an Islamist police state founded under Shariah law. While these institutions provide few tangible services, they consolidate the group's governing authority by facilitating trade, collecting taxes and maintaining control over the local population.

Moreover, ISIS has never relied on basic formal financial institutions, such as banks. Instead, it has tended to reinvest its revenues in its own organization to further its fighting and state-building agendas.

President Obama's decision last week to conduct airstrikes and send humanitarian aid will help buy time for both Iraqi and Kurdish forces to regroup. But Baghdad needs a strategy that aligns the political and economic interests of all Iraqis against ISIS. The group's center of gravity lies not in the international financial system but within the local economies of Iraq and Syria. Regardless of what limited additional measures America decides to undertake in the coming weeks and months, there are three possible Iraqi policies that could help turn the tide.

If Iraq succeeds in replacing Prime Minister Nuri Kamal al-Maliki, as now seems likely, the new unity government should decentralize power and distribute a larger portion of the national budget to Sunni-majority areas. Baghdad should also work to strike deals with local Sunni tribes and business owners where ISIS has not yet taken control. These Sunni leaders would cooperate in squeezing ISIS out of local markets in exchange for subsidies and other direct government economic assistance.

Second, America could help the Iraqis and the Kurds analyze ISIS financial information collected in raids and from informants, and then use that information to plot a strategy and to plan operations.

Third, Iraqi and Kurdish forces should make it a priority to displace the group from oil wells in northern Iraq, and to restrict its ability to process oil at its refining facilities in eastern Syria. The Iraqi government must also engage Turkey, Jordan and the Iraqi and Syrian Kurds to plot a joint strategy to contain ISIS's oil operations, especially stopping ISIS from controlling Baiji, Iraq's largest oil production facility, which small Iraqi special forces teams have been defending for the last two months.

The United States can help at the margins, but ultimately only the Iraqis have the power to defeat ISIS.

Patrick B. Johnston is a political scientist at the RAND Corporation, where Benjamin Bahney is a member of the adjunct staff.

This commentary originally appeared on The New York Times on August 13, 2014. Commentary gives RAND researchers a platform to convey insights based on their professional expertise and often on their peer-reviewed research and analysis.