Six Takeaways from the Ebola Outbreak in West Africa 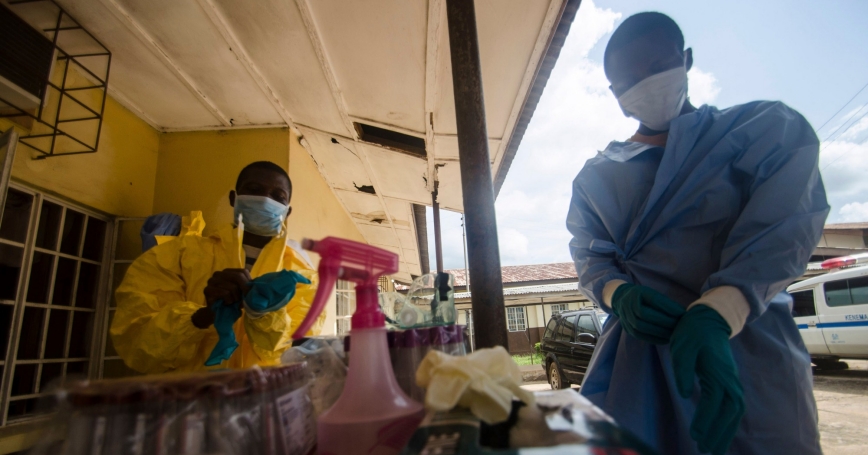 Medical staff put on protective gear before taking a sample from a suspected Ebola patient in Kenema, Sierra Leone, July 10, 2014

The Ebola outbreak in West Africa is the worst in recorded history, with nearly 900 deaths reported by the World Health Organization. No amount of research can save those who've already perished, but our capacity to learn from such tragedies is a silver lining that has historically enhanced global resilience to disease. With that in mind, here are six key lessons from the outbreak.

Before the Ebola outbreak, there was MERS, SARS, H1N1, H5N1, measles, and polio. Today, no part of the world is inaccessible to humanity, and people cross borders in unparalleled numbers and with unprecedented speed. Modern transportation boosts convenience and commerce, but it also facilitates the rapid spread of microbial agents from even the most remote corners of the planet. This highlights the global nature of today's infectious disease challenge.

Ebola is a relatively new disease with no vaccine or cure. It's transmitted via bodily fluids, rather than air, as with influenza or SARS.

Ebola is a “hot” disease that spreads rapidly but can “burn out” once people are alerted to its presence. This is particularly true for countries with strong health infrastructures, infection control practices, and contact-tracing procedures that slow or stop diffusion.

Fear and Misunderstanding Are Factors

A killer disease with no vaccine or cure is a frightening thing. Even more terrifying is how Ebola rapidly breaks down the body from within. The possibility of dying so horrifically stokes public fear, so it's essential that authorities employ measures to contain the spread of panic, as well as disease.

Mistrust of government can be challenging, too. In Africa, for instance, some are refusing treatment or threatening health workers. Culture is also a factor. For example, police in Guinea reportedly tear-gassed a mob that was attempting to take infected corpses from a morgue for burial rites.

The same goes for ignorance of disease transmission. Ebola is transmitted through bodily fluids and requires close contact with an infected person. However, this subtlety can be lost on laypeople who may think that merely being near an infected person puts them at direct risk.

Quarantine invariably has human rights implications and involves balancing individual and collective interests. This is a persistent legal and policy challenge for public health. Sierra Leone, the nation with the most Ebola cases, has declared strict quarantine rules, while Liberia is reportedly considering similar measures.

Infection stigma is also worth considering. Outbreaks could generate popular pressure to seal off affected regions. How various governments react can be unpredictable and could stretch societies to the breaking point. In areas where government is unable to contain disease, civility would be severely tested.

Ebola in America Is Unlikely

Because of how Ebola is transmitted and the strong health infrastructure and infection control practices in the United States, the likelihood of a major Ebola outbreak is small.

If an infected person arrived in America, the health system could diagnose the disease, provide treatment, and trace the whereabouts of any individuals who came into contact with the patient. The latent risk from these “third parties” could be addressed through isolation, if they're ill, or quarantine, if they were exposed but are currently asymptomatic. Should an outbreak actually occur, it'd likely be highly localized and would probably burn out quickly.

Because there's nothing to stop an infected person incubating Ebola from boarding a plane, we should expect to see isolated cases and small outbreaks in places beyond Guinea, Liberia, and Sierra Leone. However, an asymptomatic person isn't contagious in the same manner as someone harboring an airborne viral strain, so screening passengers leaving the affected areas for overt signs of infection is an important tactic to prevent further infection. The same goes for quarantine stations elsewhere.

The CDC is currently trying to put the small risk of a major outbreak into perspective—a challenging task given that Ebola scares Americans, as well as Africans.

There's Reason to Be Optimistic About the Fight Against Ebola

Though unlikely to have a great impact on the current outbreak, there are encouraging signs of progress in developing tools for future fights against Ebola.

An investigational drug, likely administered under the FDA's “compassionate use” regulation, seems to have had positive effects for two infected Americans. However, much remains unknown about the drug, which until a few days ago had only been tested on primates.

Scientists have also developed an Ebola vaccine, which will undergo human trials starting next month. While there are many practical challenges that still need to be overcome, if all goes well, the vaccine could be approved by mid to late 2015, providing an important weapon to curb future outbreaks.

Jeanne S. Ringel is director of the Population Health Program at the nonprofit, nonpartisan RAND Corporation. Peter Chalk is a senior political scientist at RAND.