Taking It One Crisis at a Time 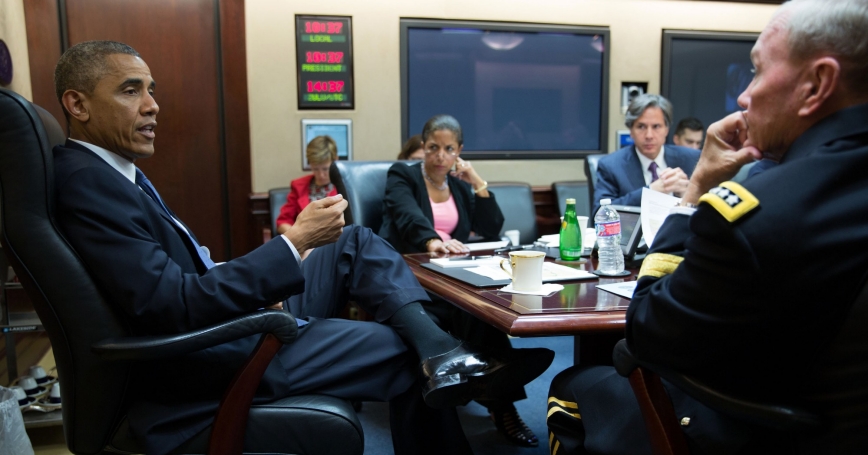 U.S. President Barack Obama meets with the National Security Council in the Situation Room of the White House

American policymakers face a bewildering array of challenges, from Russian aggression against Ukraine in the West to Chinese expansionary maritime claims in the East, with chaos raging throughout the Middle East and al-Qaida proliferating offshoots in much of Africa. As compared to the immediate post-Cold War decade, the world today seems much less stable and the United States much less influential.

The former impression, at least, is probably wrong. The decade following the fall of the Berlin Wall in 1989 saw the unification of Germany, the liberation of Eastern Europe, the first Gulf War, the collapse of the Soviet Union, the deployment of American troops into Somalia, the invasion of Haiti, and the air campaigns in Bosnia and Kosovo, followed by the NATO peace enforcement missions there. During the 1990s, the United States conducted five boots-on-the-ground military interventions, on an average of once every other year.

The main difference between the immediate post-Cold War decade and the post-9/11 era as regards the variety of international challenges is that during that earlier period these challenges were faced and dealt with seriatim, rather than allowed to accumulate. Each of the above cited hurdles was taken, for the most part successfully, before the next was encountered. As a consequence, the George H.W. Bush and Clinton administrations usually had the luxury of managing only one serious crisis at a time.

By contrast, the George W. Bush and Obama administrations have faced a growing number of simultaneously acute challenges. This began with the decision to invade Iraq before Afghanistan had been pacified. Then al-Qaida began to metastasize, creating numerous offshoots throughout the Middle East and Africa. Then came the Arab Spring, with popular uprisings evolving into civil wars in Libya and Syria. The United States is still conducting major combat operations in Afghanistan and Iraq, along with smaller counter-terrorist actions in Yemen, Somalia and several other places. These challenges have not come any more frequently than they did in the 1990s, but since none have been overcome, they have accumulated.

One common explanation for the contrast between the pre and post 9/11 decades was that the former represented a unique “unipolar moment” which has since passed. This is offered as the reason why the elder Bush and Clinton experienced greater success in the international realm than their two successors. But while it is true that China has become a more formidable competitor over the past two decades, America's hard power advantage is otherwise undiminished. The problem is not that the United States is weaker than it was 20 years ago, but that it is bogged down facing multiple security challenges, none of which it has been able to conclusively surmount.

As noted, the origin of this problem stems from having invaded Iraq before stabilizing Afghanistan. President Barack Obama thus entered office behind the curve, saddled with two ongoing wars. He sought to escape this predicament first by carrying through on his predecessor's commitment to withdraw American troops from Iraq by the end of 2011 and more recently by setting a December 2016 deadline for the withdrawal of American forces from Afghanistan. He has also consciously limited American engagement in newer conflicts in Libya, Syria and most recently, Ukraine.

In this he is very much in tune with American public opinion. The United States obviously cannot simultaneously overcome all of the multiple security challenges it currently faces. But unless it can successfully dispose of some, the number will just continue to rise. Limiting American involvement in some places in order to concentrate on others makes sense. Limiting American engagement everywhere, however, is just asking for an ever-mounting number of challenges. Wars are not over because the United States says they are, but because the societies in question have been brought to peace with themselves and their neighbors. Bringing peace to Afghanistan, Iraq, Syria, Libya and Ukraine may be more than even the United States can manage, but unless it begins putting out fires like this one at a time, the conflagration can only grow.

Ukraine is probably the most urgent challenge, and also the one with the best prospects of a reasonably satisfactory outcome. There are no easy or quick solutions to Iraq, Syria or Libya. Until recently Afghanistan has been on a positive if slow trajectory, and the administration is right to do everything possible to get it back on that track. We should anticipate comparable challenges will continue to arise, unexpectedly and probably unpredictably, every couple of years. We need to begin moving existing crises into the success column, however modestly success is defined, if we are to have the will, resources and focus needed to deal with the new.

James Dobbins, a veteran diplomat who most recently served as the State Department’s special representative for Afghanistan and Pakistan, is a senior fellow at the nonprofit, nonpartisan RAND Corporation.

This commentary originally appeared on U.S. News & World Report on August 19, 2014. Commentary gives RAND researchers a platform to convey insights based on their professional expertise and often on their peer-reviewed research and analysis.