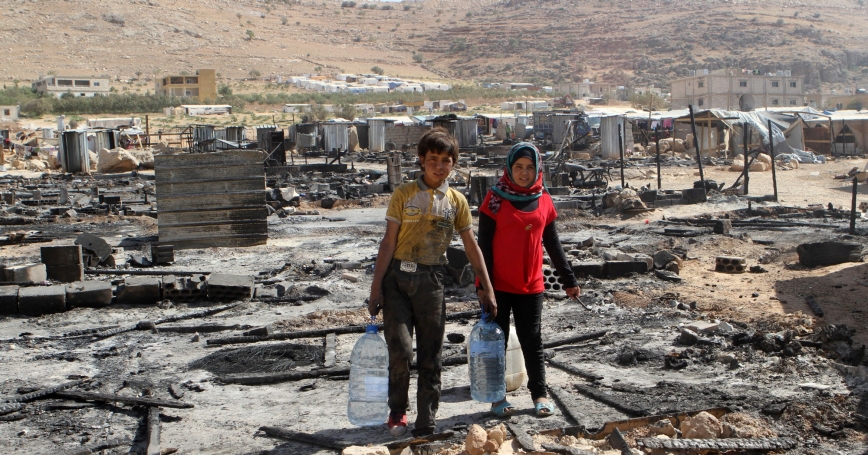 Syrian refugees walk amid damage and the remains of tents that were burnt in the fighting between Lebanese army soldiers and Islamist militants in the Sunni Muslim border town of Arsal, August 9, 2014

Abu Bakr al-Baghdadi, the self-proclaimed caliph of the Islamic State, has said in his speeches that he recognizes no borders. In light of his actions over the past two months and the recent incursions into Arsal in Lebanon and Sinjar in Northern Iraq, the United States should take him at his word and plan accordingly.

Al-Baghdadi's ambitions in the region seem limitless: expansion to the east and north through Iraq and Kurdish areas, west into Lebanon and Jordan, and south into the Arab Gulf. Saudi Arabia, however, contains what he wants most: control of the holy sites in Mecca and Medina, and control of the kingdom's oil.

This week, President Obama authorized limited airstrikes against targets in Iraq and the first attacks came Friday near the Kurdish capital of Irbil. Now U.S. advisers are headed to the region. But there are other things the United States could be doing to contain the Islamic State.

No Arab country acting alone or in unison with others in the region is likely to intervene to disrupt these plans. Iran may be able to slow the Islamic State's aspirations somewhere south and east of Baghdad, but Iraqi forces have already shown that they lack the commitment and firepower to be able to stand their ground against the onslaught, which continues to close in on the capital.

The Lebanese Armed Forces with the help of Hezbollah might be able to make a stand along the Syrian border. The discipline of Jordanian forces is also likely to pose a serious obstacle to the expansion of the caliphate into Jordan. In the end, however, the real challenge to both the Lebanese and Jordanians will be in fighting the internal threat as the Islamic State gains adherents through its messaging campaign and capable administration of the territories it seizes.

Operating from his capital in Raqqah, Syria, al-Baghdadi is working hard to win the hearts and minds of the Sunnis in the region by keeping the electricity on and attempting to show that his governors are not corrupt. His military and political actions so far show that he not only thinks strategically about war, but that he is intent on properly administrating and otherwise actually governing the areas that have fallen under his control. These actions appeal to many people who have grown tired of government corruption and years of war.

The United States and its allies in Europe and the Middle East should consider steps now to counter the Islamic State's expansion before it more seriously threatens traditional political, social, and economic relationships in the region, and rewrites Islam for the majority of the Muslims in the world.

To disrupt al-Baghdadi's advance, the United States and its allies should start by addressing the source of the problem — the conflict in Syria. They can begin by negotiating a truce with President Bashar Assad to stop the fighting in Syria. At the same time, an international stabilization force should be mobilized to create humanitarian safe zones in Syria so humanitarian aid can be delivered. This force, made up of NATO and Arab forces, could also be instrumental in taking back territory lost to the Islamic State, and in countering the spread of jihadist influence by Jabhat al-Nusra and its al-Qaida affiliates. This will show the people of the region that al-Baghdadi's new Islamic State is not invincible and that it does not speak for the majority of other Muslims in the region or beyond. Assad might accept such an arrangement because it would allow him to retain power over at least a portion of Syria.

The United States and it allies also should provide direct military support to the Lebanese, Jordanians, and Arab Gulf states, ensuring that any further attempts at expansion of the Islamic State will meet stiff resistance. The Iraqis and Kurds too should continue to be given assistance to support efforts to contain the Islamic State in the northern part of the country. Iran will defend itself and will fight to preserve Shia areas of Iraq and the holy cities of Karbala and Najaf from encroachment by the Islamic State.

Finally, a messaging campaign should be created that counters al-Baghdadi's efforts to sow discord between Sunni and Shia and that focuses on the threat al-Baghdadi poses to Islam in general and to the holy sites in Mecca, Medina, Karbala and Najaf. An end to the fighting in Syria will help accomplish some of this new messaging. It also will help curb the increasing radicalization of youth in the region and thereby prevent new jihadists from joining the battle on both sides. In a coordinated effort, the Saudis and others in the region will be able to help turn the propaganda tide back against al-Baghdadi and his allies.

The creation of an international stabilization force and serious defense assistance to allies and neighboring states in the region will serve to contain al-Baghdadi's aspirations. It is always possible that his new Islamic State may overextend itself and collapse under its own weight, a possibility that would only be hastened by an alliance aimed at isolating it. But it is too dangerous to wait and see. Al Baghdadi's ambitions at the moment threaten the stability of U.S. allies in the region, as well as the prospects for the development and spread of democracy, and ultimately the free trade and supply of oil from the Arab Gulf. It makes no sense to continue waiting to see what happens next — nothing good awaits.

William Young is a senior policy analyst at RAND Corporation.

This commentary originally appeared in USA Today on August 13, 2014. Commentary gives RAND researchers a platform to convey insights based on their professional expertise and often on their peer-reviewed research and analysis.