What's Going on in Iraq? 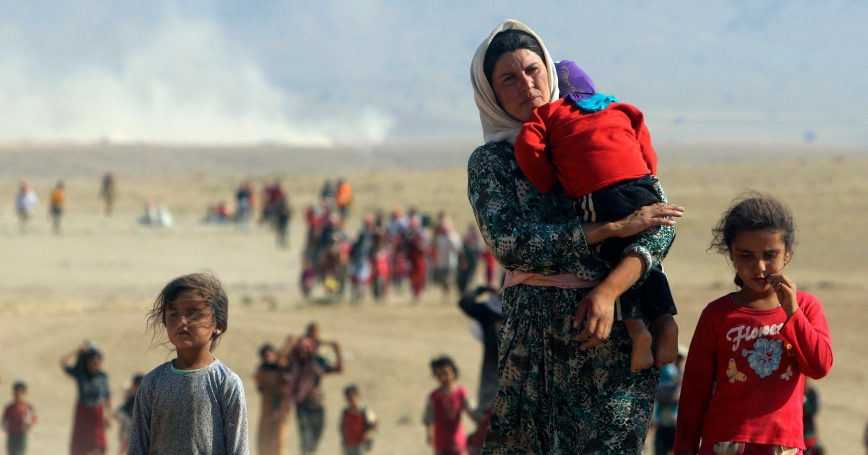 Displaced people from the minority Yazidi sect, fleeing violence from the Islamic State, walk towards the Syrian border, on the outskirts of Sinjar mountain, August 11, 2014

1) Why is the United States now conducting airstrikes against the Islamic State?

Recent advances by militants of the Islamic State in northern Iraq have created a situation of immediate crisis on two fronts. One is a potential humanitarian disaster resulting from the Islamic State's campaign to displace and kill members of the Yazidi minority population and other civilians — a literally genocidal action in legal terms. The other is the Islamic State's advance toward the Kurdish regional capital of Irbil, where the failure to stop the Islamists would not only imperil the citizens, international residents and refugees there, but would also threaten the survival of the Iraqi Kurdish state-within-a-state, a longtime U.S. ally. In response, the United States has been airdropping supplies to help Yazidis who are cut off in northwestern Iraq, has begun for the first time to supply arms and ammunition directly to Kurdish peshmerga forces, and has launched a small number of airstrikes against Islamic State forces attacking both groups.

2) Why hasn't the Islamic State been bombed before this?

Earlier this summer, the Islamic State made alarming advances in northern and western Iraq that led to fears that the group would advance to Baghdad and to calls for U.S. airstrikes. Several factors made the case for launching air attacks less powerful than it is now. First, the prospect that the Islamic State could actually seize the Iraqi capital — a huge city now populated overwhelmingly by the group's Shiite enemies — was remote at best. Second, the United States was not keen to act in conspicuous defense of a government that has been politically toxic for Iraq, and the ability of the Iraqi army to fight effectively against the Islamic State even with air support was very questionable. (Meanwhile, the United States has never seriously considered attacking the Islamic State in Syria because, there, the Islamic State is the enemy of a U.S. enemy — the Assad regime and its Hezbollah supporters — though it has also fought against the Free Syrian Army rebels who launched the uprising against President Bashar Assad to the applause of the West.)

Although President Barack Obama has warned that reestablishing a viable Iraqi state will be a long-term project (and many analysts question whether that objective can be achieved at all), how long the airstrikes will continue is likely to depend heavily on how the Islamic State responds to them and to Kurdish efforts to stem the group's advances. If the air attacks and assistance to the peshmerga are sufficient to fend off the Islamists' offensive, the Islamic State might decide the game is not worth the candle and turn its energies in another direction.

However, if the Islamic State carries on, it is reasonable to expect the current U.S. effort to continue, or even to increase in intensity if that appears necessary to secure the Kurds' position. An increase in the use of airpower may also be called for if and when the Kurds go on the offensive to retake territory they have recently lost. The Islamic State appears to have the resources to make a long fight of it, but continuing to conduct air attacks even on a significantly larger scale than the low frequency seen in the past few days is easily within the capabilities of U.S. forces in the theater.

4) Are airstrikes likely to be effective?

Although the Kurdish forces are reasonably well organized and disciplined, they face a firepower imbalance against the Islamic State, which has acquired significant amounts of equipment once owned by the Iraqi and Syrian armies. The Islamic State's vehicles and artillery make good targets for air attacks, and when the Islamic State forces concentrate to attack (or defend against) their opponents on the ground, their vulnerability to bombing increases. This sort of “hammer-and-anvil” mechanism works best when ground forces are steady and capable and when there is good coordination with airpower, making advisers and liaison officers working with the ground forces invaluable for such a campaign. Thus, in concert with efforts to bolster the capabilities of the peshmerga, air reconnaissance and strikes against the Islamic State could make a considerable difference in terms of capabilities — and the combatants' morale — on the ground. Early reporting indicates that even the few strikes to date have had a noticeable effect.

5) Is this the start of greater U.S. military involvement in Iraq?

At present, the United States is not seeking to destroy the Islamic State, or even to substantially weaken it through the ongoing airstrikes against its front line forces. In this sense, the bombing can be said to resemble the attacks launched against Libyan troops advancing toward the rebel stronghold of Benghazi in March 2011, when fears of a massacre by Moammar Gadhafi regime forces mobilized international support for aerial intervention by a coalition led by France, Britain and the United States. Airstrikes halted the Libyan army's thrust in the nick of time and prevented the regime from destroying other centers of the rebellion. Thereafter, the campaign quickly evolved into a broader and ultimately successful effort by Western airpower and increasingly capable Libyan rebel forces acting in concert to remove the Gadhafi regime, on the grounds that only by doing so could Gadhafi's threat to his people be eliminated.

A similar transition could ultimately occur in Iraq as well, if and when the situation is stabilized. However, destroying the Islamic State would be an ambitious undertaking, given its capabilities and resources and the currently limited capabilities of the reform-averse Iraqi government to mount an offensive against the group. Such an effort would also be greatly complicated by the Islamic State's presence not only in Iraq but also in Syria, where the United States is aligned against its main adversary (while Iran, the Assad regime's principal ally, is also a supporter of the Iraqi government's resistance to the Islamic State). Therefore, while the United States could embark on a much wider war in Iraq, there is little reason to think that it will rush to do so or that using airpower to help defend the Kurds will make such an escalation inevitable.

Karl P. Mueller is associate director of the Strategy and Resources Program in the RAND Arroyo Center and a senior political scientist at the nonprofit, nonpartisan RAND Corporation.

This commentary originally appeared on U.S. News & World Report on August 13, 2014. Commentary gives RAND researchers a platform to convey insights based on their professional expertise and often on their peer-reviewed research and analysis.