A Dispatch from the Ukrainian Front 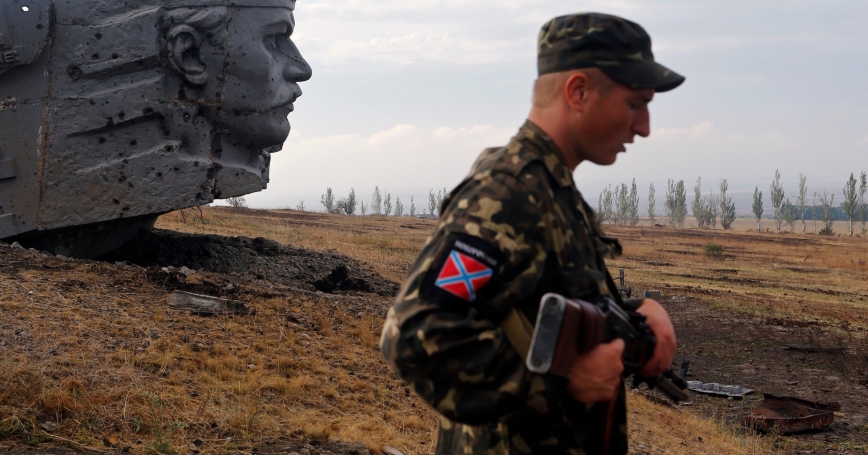 A Pro-Russian separatist stands near the damaged war memorial at Savur-Mohyla, east of the city of Donetsk, Ukraine

by Terrence Kelly and David A. Shlapak

If Russian President Vladimir Putin were to seek the assessment of his Russian Western Front Military commander about NATO's prospective reaction to the Ukrainian situation, the reply might run as follows.

I am writing in response to your request for my assessment of the operational and strategic situation along the border of the Western Military District.

You have posed three important questions: Will NATO respond to our efforts to restore Russian influence over key former Soviet territories and weaken NATO unity (as outlined in your latest directive)? How might they respond? What might be the early signs that a response is in the offing?

To address these questions, the Western Military District staff analyzed enemy political and military options and likely courses of action. Importantly, we did not consider possible enemy economic counters, as those are best assessed by our comrades in the ministries of defense and economics.

As such, it is clear that you have a green light from the military perspective to undertake any actions you desire in Ukraine without fear of military intervention. Still, we should be monitoring for any signs that NATO may be preparing to move to a more aggressive footing.

However, the alliance's commitment to collective security does not appear to be in question. Despite existing capability limitations, there is little doubt that NATO would come to the aid of any former Soviet territory or Warsaw Pact state that has joined the alliance.

NATO's military capacities have atrophied considerably in recent years as the wars in Iraq and Afghanistan have preoccupied the United States. At the same time, Western European countries have slashed defense spending and in many cases reoriented their armed forces toward peacekeeping rather than combat.

The U.S. Army currently has only two brigades deployed in Europe, and recently deactivated or removed its last division and corps headquarters there. Anything but the most modest military operations in Europe would require an Army command to plan for a contingency, manage critical logistics, communications and transportation issues, receive reinforcements and perform other critical tasks. A U.S.-based unit could command an operational level response, but not with anything approaching the depth of understanding and alacrity of a corps headquarters in Europe.

Current efforts to demonstrate commitment via small deployments of troops in Poland and the Baltics represent no threat. They are intended to bolster the confidence of NATO's easternmost members, not counter our moves in Ukraine.

The United States and its allies can rapidly deploy and employ air power, but this would be most effective against a conventional attack, which we are not planning. Air forces are of limited use against the militias we would be supporting with our special and intelligence forces. These forces operate mostly in urban areas, which NATO will almost certainly refuse to attack; no NATO generals will give us the public relations fodder such strikes would provide our strategic communicators.

What might be the early signs that a response is in the offing?

Rebuilding military capacity in Europe would be a long-term undertaking for NATO. However, because our own forces are also much smaller than they once were, NATO has options short of large-scale force buildups that could adversely impact the opportunities we currently enjoy in Eastern Europe.

The simplest and most obvious indication of a newly-robust NATO commitment on its eastern front would be the creation of a corps headquarters in Poland charged with planning and preparing for defensive operations there and in our former Baltic republics. This could involve only a few hundred personnel, but would both signal a degree of fresh resolve and improve NATO's ability to respond to events using forces already in Europe and those that would flow in from North America.

Another indicator would be an increase in the size, frequency and orientation of NATO exercises in its eastern reaches. Especially troubling would be training events involving combat formations from multiple NATO allies and NATO unit leaders conducting detailed terrain walks, as they used to along the inter-German border during the Cold War. This would indicate that your strategy of using energy economics and indirect action to divide and paralyze the alliance is not achieving its full desired effects. It would also telegraph resolve to create viable plans and capabilities that would have to be seriously considered before future moves.

To summarize, there is little NATO will do militarily to interfere with your plans in eastern Ukraine. However, the alliance may take some concrete actions to re-emphasize its commitment to defend member states. Given its current political indecisiveness and lack of military readiness, NATO lacks the capability to launch a credible intervention on our western borders. Still, we must monitor their response to our activities and direct our intelligence assets to look for near- and mid-term American and NATO actions that could reduce our freedom of action there. We should watch for changes in the alliance posture that might signal significant strengthening of its military capabilities that could allow interference with our strategy in Eastern Europe.

Terrence Kelly is the director of the Strategy and Resources Program at the RAND Arroyo Center and has been a senior operations researcher at the nonprofit, nonpartisan RAND Corporation. David Shlapak is a senior international policy analyst at RAND.

This commentary originally appeared on U.S. News & World Report on September 4, 2014. Commentary gives RAND researchers a platform to convey insights based on their professional expertise and often on their peer-reviewed research and analysis.