A U.S. Strategy for Dealing with China 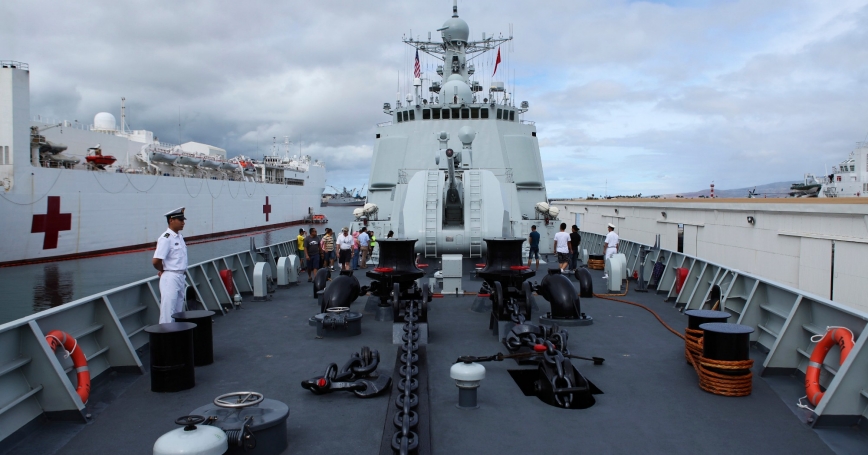 A view from the deck of the Chinese PLA Naval ship Haikou; for the first time, China participated in RIMPAC, the world's largest biennial naval exercise between the U.S. and Pacific Rim nations.

Developing a next generation strategy for dealing with China will require the United States to sculpt a balanced and flexible approach that protects U.S. interest in East Asia while at the same time fosters cooperation with China on issues of common concern.

This is a key finding a new RAND research brief entitled Developing a U.S. Strategy for Dealing with China—Now and into the Future. The report says the United States must devise a strategy that anticipates China's continued strong economic position and its sustained investment in military modernization along with sweeping demographic, environmental, technological, and economic changes.

The United States should maintain the military means to project power rapidly to virtually anywhere in the Western Pacific region, exploit technology to reduce the vulnerability of U.S. forces to improved Chinese targeting and maintain a range of credible non-nuclear escalation options. It also should take advantage of the difficulty China faces in projecting force over long distance and leverage its strong relations with regional partners including South Korea, Japan and Australia.

The U.S. Army will have key roles in supporting U.S. strategy in the Asia-Pacific, including cooperating with allies and partners to aid in their security, protecting U.S. and allied bases, supporting the joint force, and projecting force into the region. At the same time, the Army should encourage China's participation in cooperative military-to-military engagements.