Afghanistan on the Brink 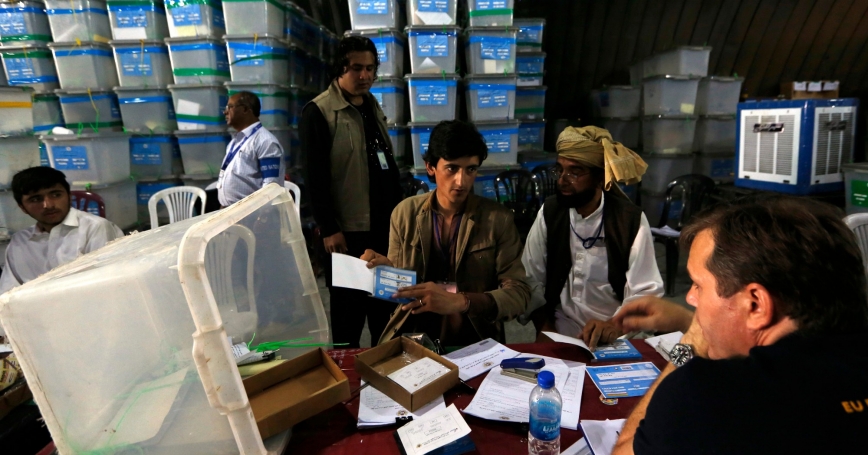 Afghan election workers count ballot papers for an audit of the presidential run-off in Kabul August 27, 2014

Afghanistan faces its most serious crisis in a decade. This time, however, it is not caused by an emboldened Taliban but by growing friction between the two contenders for president. Only a determined effort by the United States and other NATO allies can prevent an escalation into violence.

Many Westerners and Afghans embraced this year's presidential election as an opportunity to move on from President Hamid Karzai, whose relationship with Western leaders dramatically deteriorated in recent years. But the election results have been contentious.

The first round of voting was in April. No candidate secured 50% of the vote, though former Foreign Minister Abdullah Abdullah led with 45%. The two candidates with the largest shares, Mr. Abdullah and former Finance Minister Ashraf Ghani, went to a run-off on June 14. The preliminary results showed Mr. Ghani ahead with roughly 56% of the vote, yet allegations of fraud mounted.

In July, the candidates agreed to a recount under the auspices of the United Nations and with the direct involvement of U.S. Secretary of State John Kerry. Still the impasse between the Abdullah and Ghani camps has persisted. Now some senior Afghan political and security officials have considered imposing an interim government, a move tantamount to a coup.

The stakes are high. So is the tension in Kabul, where there are rumors that some of Mr. Abdullah's supporters are considering violence if Mr. Ghani is declared the winner in coming days.

Leaders from the Jamiat-e Islami, a political party associated with the Tajik community and Mr. Abdullah, threatened in August to oppose Mr. Ghani with help from allies in the Afghan National Security Forces. Provincial and district governors with close ties to Mr. Abdullah may be arming militias to shore up their power bases in case of a Ghani victory.

Both candidates appear to be reneging on the two-part deal that Secretary Kerry brokered. Mr. Abdullah tried to block completion of the audit process, which both camps agreed to support. Meanwhile Mr. Ghani doesn't appear to be delivering fully on his promise to establish the national unity government specified in that agreement.

An outbreak of violence could have serious consequences. It could trigger a coup attempt or in-fighting among government security forces allied with the respective camps. There are growing concerns that key military, police and intelligence officials in Kabul and out in the field would support different sides in an insurrection.

Such a split would weaken the government and the fragile Afghan National Security Forces, which could rupture along ethnic lines. That could allow pro-Abdullah forces to consolidate control of the capital and other primarily Tajik and Hazara provinces in central and northern Afghanistan, while pro-Ghani forces could control Pashtun areas in the east and south of the country.

There are already indications that segments of the Afghan National Army, such as the 205th Corps headquartered in Kandahar, could face significant divisions if the losing candidate broke with Kabul. Its subordinate units—which consist of four brigades, a commando battalion and three garrisons—might fracture because of the divided political loyalties of its commanders.

This division would almost certainly facilitate Taliban advances, particularly in the critical eastern and southern fronts, where the Taliban is gaining some ground. In Nangarhar in July, for example, Taliban forces constructed a series of trenches, tunnels and berms before they overran nearly a dozen security posts and threatened Hisarak District Center.

Balkanization of the Afghan National Security Forces would be doubly dangerous. Leaders would have to divert part of their time, money and resources to fighting each other rather than the Taliban. Morale would be severely weakened, undermining the effectiveness and determination of army, police and intelligence units.

A bloody internal struggle isn't inevitable but increasingly possible. So it's essential for the U.S. and its allies, who have already invested enormous blood and treasure in Afghanistan, to prevent the political cracks from widening.

Perhaps the most significant step is to continue encouraging the creation of a national unity government in which the winning candidate integrates key supporters of the loser's side. This would include appointing supporters to key cabinet posts or provincial governor positions. It might also involve the losing candidate selecting a chief executive officer in a new administration.

Most important, the U.S. and other NATO countries need to emphasize that their continued economic and military assistance to Afghanistan is contingent on a resolution of the political crisis. It makes little sense for the U.S. to sign a bilateral security agreement with a country that can't even agree on its leader.

It would be a tragedy if one or both sides allowed the disputed election to fracture the country and increase the odds of a Taliban military victory—an outcome that neither side wants, and that would harm the Afghan population most of all.

Seth G. Jones is director of the RAND Corporation’s International Security and Defense Policy Center, adjunct professor at Johns Hopkins University, and author of “In the Graveyard of Empires: America’s War in Afghanistan.”

This commentary originally appeared in The Wall Street Journal on September 8, 2014. Commentary gives RAND researchers a platform to convey insights based on their professional expertise and often on their peer-reviewed research and analysis.