Community-Driven Development: How the Poor Can Take Charge to Improve Their Housing 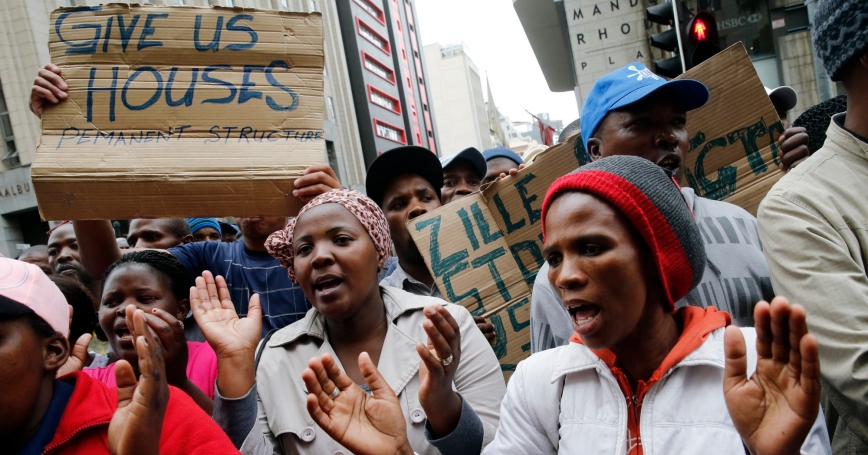 Protestors demonstrate against a lack of housing outside provincial government buildings in central Cape Town, October 30, 2013

Public housing projects have been controversial for decades in countries around the world. They have been seen as a potential remedy to housing inequality, providing a guaranteed minimum standard of living. While some developments have achieved a degree of success, others have earned bad reputations for worsening segregation, social tension, unemployment, violence, and drug use. A common complaint against even the more successful projects is that residents get little effective say about their design.

A close look at an informal settlement in Cape Town, South Africa, could serve as a guide for other countries experimenting with community-driven development, an alternative approach to public housing.

Community-driven development (PDF), which has gained traction since the 1990s, has largely abandoned the housing aims of equality and standardization. Under this approach, control over development decisions and resources goes directly to the people who potentially will be living in the housing. These citizens identify community priorities. They organize to address local problems as partners with local governments and other organizations. Such projects are emerging in Cape Verde, Ghana, Mali, Mauritania, Senegal, Brazil, Indonesia, Azerbaijan, Benin, and Morocco. The result is considerable variety, as community-driven housing becomes as diverse as the personalities of those driving them. The hope, of course, is that the best developments will be scaled up and their recipes for success will be shared, serving as useful guides for other communities.

One such successful development is Mshini Wam (PDF) in Cape Town, South Africa—a neighborhood whose name refers to a similarly titled song, meaning “bring me my machine gun” and popularized by South African President Jacob Zuma.

Mshini Wam was founded in 2006 on an open lot provided by the government under its Reconstruction and Development Program between the subsidized houses of Joe Slovo settlement. Although that program sought to replace shacks with houses, it actually led dwellers to move their shanties into the back yards of new houses in the settlement. The shack dwellers paid homeowners rent allowing them share electricity, water, sanitation, and garbage collection. When a group of these “backyarders” tired of paying rent, they moved their shacks onto a small open lot nearby.

Soon, there were 500 residents in 250 shacks, dwelling in an area so densely occupied that only narrow alleys existed between shanties. Emergency crews had no clear ways through. When one shack caught fire, 42 others were destroyed before firefighters could make their way in. There were only three water taps and very few public latrines on the settlement's outskirts. Disease spread easily, especially when the winter rains waterlogged the sandy lot, flooding the shacks.

The city viewed the area as a public health disaster and threatened to raze the area and evict residents.

Fortunately, an alliance of community organizations—the Informal Settlement Network, the Community Organization Resource Center, and a group called Ikhayalami—came up with another plan. They called on the city to upgrade, or “re-block,” Mshini Wam. The city agreed, contributing construction equipment and about $600,000 for basic services. Community activists, mostly women, went door-to-door, persuading neighbors to contribute their own money, time, and effort.

The women activists carried out a property census, counting the shacks and collecting data on settlement residents. This allowed residents to receive certain legal protections for their housing, known as security of tenure. Next, a group of mostly unemployed men measured each shack and drew up a layout plan, with technical assistance from the community resource center. A third team held community meetings and drafted a vision plan for a reimagined Mshini Wam. The community agreed on a plan to rearrange the 250 shacks into 29 clusters, opening up space for courtyards and roads. The goal was to improve safety, security, and service provision.

The residents then organized themselves into teams that took responsibility for various aspects of their community upgrade: demolition, building, carpentry, compacting soil, gardening, electrical and technical work, and cleaning. The Extended Public Works Program, a national government work initiative, agreed to compensate residents for their work and—in a move that could boost their subsequent employment prospects—certify residents' skills development.

In a speech delivered in Mshini Wam, Mzwandile Sokupa of the city's Informal Settlements Management Department said he was glad that Cape Town had moved away from a top-down approach to public housing: “Sometimes when we come to the people with the plans we have, they reject them and say, 'This is not what we want. Why do you sit in your boardroom with your air conditioner and do plans for us?'” Sokupa said he was happy, instead, to have supported a program that let the community shape its neighborhood as it saw fit.

Completion of its current upgrades won't end Mshini Wam's transformation. Community leaders already have the next improvement in mind. They want to move from wooden shacks to brick houses.

The Mshini Wam model is being tried in other communities, such as Khayelitsha, Vygieskraal, and Masilunge. It is under discussion with housing activists from Zambia, Zimbabwe, and other African countries. Supporters express excitement over the prospect that Mshini Wam's successes, adapted according to different challenges, might be replicated far and wide.

Julia Pollak is an assistant policy analyst at RAND and a Ph.D. candidate at the Pardee RAND Graduate School. This was written for the Pardee Initiative for Global Human Progress.