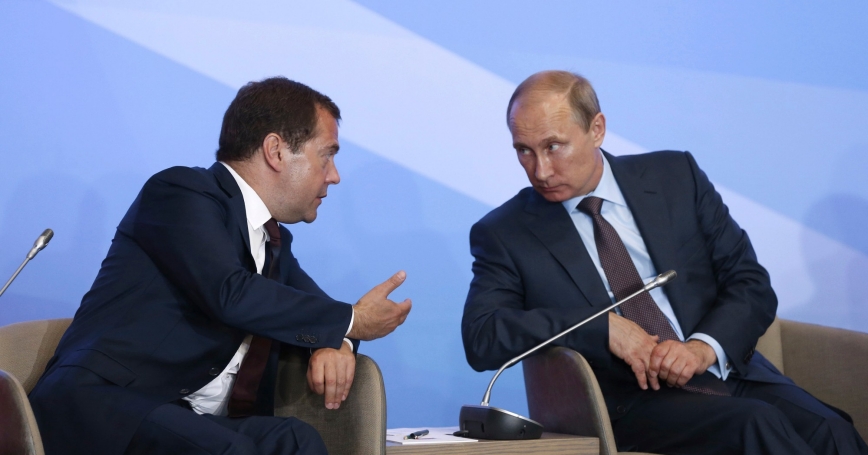 Russia's Prime Minister Medvedev and President Putin attend a meeting with members of the Russian Parliament in Yalta, Crimea, August 14, 2014

Since the beginning of the crisis in Ukraine, the U.S. and the EU have sharply criticized Russia's assistance to separatists in the east, arguing that Moscow's provision of fighters, weapons, equipment, and even direct military support are deeply destabilizing to the region. But Washington and Brussels have paid far less attention to the economic assistance Moscow is providing to Crimea, the formerly Ukrainian peninsula that Russia annexed in March.

Annexation, however, will not magically enable Moscow to govern Crimea, which has no overland connection to Russia and which had been dependent on its land bridge to Ukraine for trade, travel, public services, and essential services like power and water. Crimea's geographic separation from the Russian mainland will also complicate Russia's ability to exercise authority and promote economic development in the region.

Furthermore, infrastructure improvements, development aid, government operations, and other costs will be a multi-billion drain — as much as $4.5 billion per year, according to Russia's economic development minister — on Russia's already strained budget.

The primary obstacle to effective Russian rule is Crimea's separation from Russia by a now-hostile state. All territorial exclaves are dependent on surrounding countries for trade, travel, security, and — perhaps most importantly — access to critical supplies and services.

Crimea's only territorial connection to the Eurasian landmass is through a narrow strip of land leading to Ukraine, which until recently served as a conduit for 90 percent of Crimea's electricity, 90 percent of its water, and two-thirds of its natural gas.

Kiev is in no mood to help Russia administer Crimea by continuing to provide such services. Soon after the Russian invasion in March, Ukraine cut off power to parts of the peninsula. In April, Ukraine closed Crimea's main irrigation canal, which curtailed the region's cultivation of staple crops.

With roads closed, the region is no longer able to import and export goods, including food, through Ukrainian territory. An end to overland and airline connections to Ukraine has decimated Crimea's tourism industry, 70 percent of whose clients came from Ukraine.

To prevent the region from remaining susceptible to the whims of its former sovereign, Moscow has announced it will both upgrade local power plants and connect Crimea to the main Russian power grid ‚ at a cost of $2 billion, according to Russia's Energy Ministry. In March, Prime Minister Dmitry Medvedev proposed building a local desalination plant to mitigate water shortages in Crimea.

Exclaves depend on transportation links to the mainland for their economic survival. Ferry services to Russia across the Kerch Strait are inadequate and susceptible to delays and disruptions caused by bad weather. To establish a reliable transit linkage, President Vladimir Putin and Prime Minister Dmitry Medvedev have already announced plans to build a bridge across the strait that would carry both cars and trains — at a cost, according to Russia's minister for Crimean affairs, of $6.9 billion.

Exclaves are dependent on imported goods. They are small, captive markets with finite labor pools, and high transportation costs raise prices for virtually all goods. Governments can mitigate these inefficiencies — while also integrating exclaves into national economies —through subsidies, preferential tax regimes, and other policy measures, but such steps can be costly to maintain over time.

Moscow has proposed making Crimea a special economic zone (SEZ) that would enable businesses to receive favorable investment terms, lower tax rates, and other incentives. While such terms may lower the costs of doing business in the region, continued legal uncertainty, political risk, and Western sanctions may discourage companies — both foreign and Russian — from entering the Crimean market.

Moreover, tax exemptions provided by an SEZ would deprive the regional and central governments of much-needed revenues.

Lost tax revenues and the price of transportation infrastructure aside, the costs of improving and administering Crimea alone will be enormous burdens for Moscow. Moscow will need to invest heavily in Crimea's internal infrastructure, which is in poor condition. To promote tourism, Moscow intends to invest $882 million to improve hotels, resorts, and beaches.

Furthermore, Medvedev announced that Crimean government employees' salaries and pensions would be increased to match what their counterparts earn on the Russian mainland, which would cost Moscow more than $1 billion per year.

Financially, Moscow may have overreached, as it appears ill-prepared to come up with the necessary funds. To cover Crimea-related costs, Moscow has already raided Russians' pension funds to the tune of $7.2 billion, which Finance Minister Anton Siluanov said will not be reimbursed.

Moscow has asked government employees to contribute a day's pay to support Crimea, and the Finance Ministry has hinted that Russians' income tax rates may increase to offset the government's spending. Infrastructure projects in Siberia and in the Krasnodar region have been cancelled, with the funds redirected to Crimea.

The longer it takes to improve Crimea's infrastructure and economy, the more dissatisfied Crimeans will become with their new sovereigns, and the longer Crimea will serve as an irritant in Moscow's relations with Ukraine, the EU, and the U.S. Furthermore, both ethnic Russians and minorities in Crimea could rebel against Russian rule if Moscow's promises of prosperity fail to materialize.

These tensions and the high costs of administering Crimea — including hardships caused by Western sanctions — could become so burdensome that they undermine Putin's domestic agenda and drag down the Russian economy. If Crimea becomes a long-term political and economic burden whose residents end up resenting Russian rule, Crimea could end up destabilizing Russia rather than contributing to its glory.

This commentary originally appeared in The Moscow Times on September 7, 2014. Commentary gives RAND researchers a platform to convey insights based on their professional expertise and often on their peer-reviewed research and analysis.