From Glasgow to Kashmir 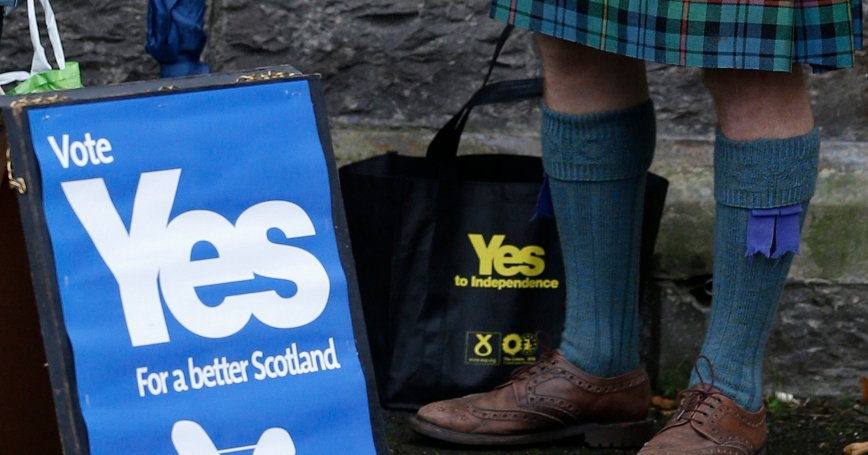 A supporter of the 'Yes' campaign stands outside a polling station during the referendum on Scottish independence in Pitlochry, Scotland, September 18, 2014

In Thursday's vote, the people of Scotland did not opt for independence. But they may well have lowered the bar for separatists all around the world — not least among the countless ethnic groups of Asia. The Caledonian contest came down to the very end, with 55 percent eventually voting to remain part of the United Kingdom and 45 percent opting out. Had 193,000 Scots, just one-third the population of Glasgow, voted differently, the result would have been a new country. London had already agreed to honor the referendum's outcome. But, as the Highland bard Robert Burns once wrote, “The best laid schemes o' Mice an' Men, gang aft agley.”

For the world's other would-be separatists, schemes gang agley more aft than nae. Almost every modern nation has some sort of local separatist movement, and the international community views nearly all of them either with indifference or contempt. Merely to be considered a quasi-legitimate candidate for independence, a group generally has to suffer generations of brutality bordering on genocide. Even then, the odds aren't great. Just ask the Kurds.

The vote in Scotland shows what modern-day secessionism should look like. What if an ethnic group didn't have to justify its bid for a separate state through a saga of historical oppression, or seek to achieve it through a violent insurgency? What if the standard for independence were nothing more than the statement: “We want out.” London agreed to take aye for an answer. If this (someday) becomes the global standard, what new states might follow in Asia?

Kashmir. India's only Muslim-majority state has been wracked by deep-seated separatist agitation since the country's independence. When British colonial rule ended in 1947, the Maharajah of the nominally sovereign Jammu and Kashmir refused to join either of the newly created countries of India or Pakistan. Independence was not on offer to rulers of some 562 princely states within the Raj. Each had to affiliate either with Muslim-majority Pakistan or Hindu-majority India, with the choice made largely on the basis of geographical contiguity and population's religious identity.

For 561 states, the choice was relatively simple. But Kashmir was geographically contiguous with both subcontinental neighbors, governed by a Hindu, and with a religiously mixed population. (Muslims were and remain the overwhelming majority in Kashmir Valley — but not in the narrowly Hindu Jammu or predominantly Buddhist Ladakh.) Maharajah Hari Singh agreed to join India only when faced with a Pakistani invasion, and on condition that the future status of his land would be determined by a plebiscite. But the vote never came, and Kashmir has rested uneasily within India ever since.

Through the 1990s, Kashmir was the site of a ferocious, initially grassroots, insurgency that has since ebbed but never truly ended. But for the past 20 years, most of the fighters have been Pakistani rather than Kashmiri, and the population of the valley has remained more cowed rather than truly reconciled. When monsoon floods ravaged the state capital of Srinagar earlier this month and Delhi was too slow to respond, mobs of Kashmiris, who are Indian citizens, pelted relief caravans with stones rather than accept assistance “from India.”

Tamil Eelam. For a quarter-century, much of Sri Lanka's ethnic Tamil population fought to carve out a separate nation in the country's northeast. In 1983, the Liberation Tigers of Tamil Eelam (LTTE) launched a civil war that raged until the militant group's destruction in 2009 by the Sri Lankan military. The LTTE was among the first terrorist groups to use suicide bombing as a core tactic. Tiger suicide bombers assassinated both Sri Lankan President Ranasinghe Premadasa, in 1993 and then-former Indian Prime Minister Rajiv Gandhi in 1991.

But the LTTE's operations extended far beyond terrorism: The group operated as a de facto government, complete with a capital, ministries, and even a bare-bones navy and air force. After the 2004 Asian tsunami, the LTTE's humanitarian wing provided more effective disaster relief than many international NGOs. Since the group's destruction, much of Sri Lanka's Tamil population has felt disenfranchised by the nation's predominantly ethnic Singhalese — and increasingly autocratic — government.

In March 2014, the United Nations approved an official inquiry into war crimes committed during the campaign against the LTTE. According to a U.N. panel of experts, 40,000 civilians were likely killed in the last stages of the civil war.

Papua. Indonesia is made up of some 17,000 islands. One of them provides Jakarta with a continuing headache — actually, it's only half an island. The province of Papua is half of the island of New Guinea, and the site of Indonesia's last significant separatist movement.

While Indonesia is a country of immense cultural, ethnic, and religious diversity, Papua stands apart. Indonesia as a whole is 87 percent Muslim, while Papua is 83 percent Christian. A majority of Indonesians are ethnically Javanese or Sundanese, and they, like most other ethnic groups in the country, fit squarely in the cultural mainstream of Southeast Asia. The people of Papua, like their cousins on the independent side of the island, are ethnically distinct from most other Indonesian communities, speak unique languages, and are part of the Melanesian cultures of the South Pacific. Papua was absorbed by Indonesia long after the country's 1949 founding. Until 1962, it was administered by the Dutch, and only formally integrated to Indonesia in 1969.

Since that time, the Free Papua Movement has waged a stubborn insurgency. Unlike the now-extinct conflicts in the Indonesian provinces of Aceh or Maluku, the rebellion in Papua shows little sign of near-term resolution. The separatist movement here is grounded not merely in human rights abuses and perception of second-class citizenship, but in fundamental questions of cultural identity.

Pattani. The southern tip of Thailand, just seven hours' drive from the tourist paradise of Phuket, is the site of one of the bloodiest insurgencies in the world. In the last 10 years, the region has seen well over 4,000 murders — for a population of less than 2 million, a rate of slaughter over triple that of Afghanistan.

The affected areas — the provinces of Pattani, Yala, and Narathiwat, and four districts of the province of Songkhla — were joined to Thailand only in 1909. Before that, they had been part of a sultanate that spilled over into what is now the state of Kelantan in northern Malaysia. The population is overwhelmingly Muslim, while Thailand is overwhelmingly Buddhist. Most of the citizens are ethnic Malays, and speak Malay rather than Thai. They bitterly resent the imposition of national symbols that they find alien, and even sacrilegious: Mandatory reverence of Thailand's king, for example, clashes with Islamic sensibilities arising from strict monotheism. The routine brutality of Thai soldiers and police towards rebels, or all too often towards any youthful male Malays, has alienated the populace even further.

Tibet and Xinjiang. China will certainly not be putting the issue on a ballot, but there is little uncertainty over how the ethnic-minority populations of these two regions would vote if given the opportunity. The only question would be of numbers rather than sentiment: Are there still enough Tibetans in Tibet, or enough Uighurs in Xinjiang, to outnumber the decades-long influx of ethnic Han Chinese to both restive provinces?

By official Chinese government figures, Tibet is still over 90 percent Tibetan, though exiled activists claim that Han are already a majority. The truth is likely somewhere in between. Even according to Chinese census figures, Uighurs now comprise only a narrow plurality of the population of Xinjiang: 45 percent of the populace in 2000 (and likely even lower now), versus 40 percent ethnic Han. The issues fueling separatism in both provinces are similar: religion, ethnicity, history, culture, and a legacy of harsh repression meted out by Beijing.

None of these territories, or the numerous other sites of long-running separatist movements throughout Asia, are likely to become independent any time soon. Separatists in Asia still see their struggles in a far more serious light than do those outside their movements. But, as Burns supposedly put it, “There is no such uncertainty as a sure thing.” Scotland's vote could be a step toward disrupting the historical pattern of independence being won by force, not granted after a vote. This was the paradigm of the past, and it remains the paradigm of the present. But the vote in Scotland just might help set a new roadmap for the future.

Jonah Blank is a senior political scientist at the nonprofit, nonpartisan RAND Corporation. Follow him on Twitter @JonahBlank.

This commentary originally appeared on Foreign Policy on September 20, 2014. Commentary gives RAND researchers a platform to convey insights based on their professional expertise and often on their peer-reviewed research and analysis.