In Ferguson's Wake, How a Data-Driven Approach Can Improve Police-Community Relations 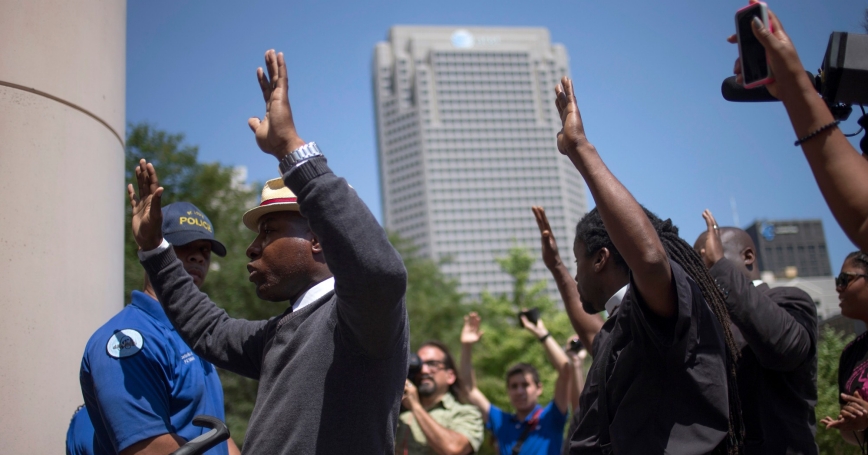 Activists, demanding justice for the shooting death of teen Michael Brown, raise their hands as they are blocked by police from entering the courthouse in St. Louis, Missouri

The controversial police shooting and subsequent civil unrest in Ferguson, Missouri, highlighted familiar themes of questionable police practices and what drives discord between police and citizens. While this latest incident serves as a flashpoint for heated discussion in Ferguson, other cities facing similar tensions should not delay their own serious examination of potential policing problems and the pursuit of effective solutions.

Research has identified some of the factors that influence the relationship between police and the communities they are sworn to protect and some departments have taken steps to improve. Yet, as the events that took place in Ferguson demonstrate, more work is needed to address the causes of strained police-community relations and to find solutions.

Community leaders and police departments have a responsibility to their citizens to address questions about their policing practices, such as: What are the most significant areas of concern? How severe are the problems? What are the most effective solutions?

To help improve the quality of policing, RAND's Safety and Justice Program has been working to provide objective analysis and offer effective solutions for police.

In 2001, RAND researchers sought answers after a similar police shooting sparked unrest in Cincinnati, evaluating the Cincinnati Police Department's operations over a five-year period. This evaluation included citizen surveys, officer surveys, an analysis of motor-vehicle stops, and an analysis of videotaped interactions between citizens and officers. This transparent, data-driven approach found no evidence of systemic racial bias in frequency of traffic stops. However, the study found a small number of officers disproportionately stopped black drivers and that black drivers were typically subjected to more intensive and time-consuming traffic stops. With community involvement, the department took a series of steps that helped improve police-community relations.

In 2008, a RAND study for the San Diego Police Department found that it could improve recruiting efforts and improve the diversity of its recruits by seeking to reach a broader pool of applicants, improving the screening process and revising recruiting and testing practices. To reach diversity goals, departments can use analytics to guide their outreach and recruiting activities to uncover qualified officer candidates. Hiring standards can be improved to make them more predictive of job performance and to ensure that they do not screen out qualified applicants.

In 2009, RAND researchers assisted the Los Angeles Police Department in its effort to reform its recruiting efforts. Using predictive models and spatial analysis, this work helped the LAPD identify the best locations to hold recruiting events. It also analyzed the flow of applicants throughout the hiring process to identify potential barriers that could prevent minorities and women candidates from successfully completing the hiring process.

In too many cases like Ferguson, solutions are often sought only after a major lawsuit, an incident of civil unrest, or a federal mandate. Yet, cities continue to wrestle with such issues, while city leaders assume (or hope) that tensions will dissipate.