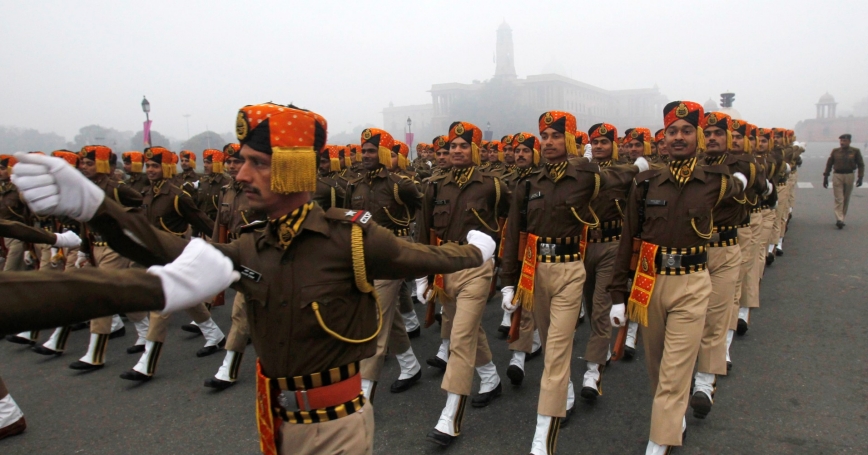 On July 31, 1988, two explosions shook the Kashmiri summer capital of Srinagar. It might have been a shot heard 'round the world: Although nobody was killed, the bombings by the previously nonviolent Jammu and Kashmir Liberation Front marked the beginning of an insurgency that would soon be a focal point for global terrorism. At the time, few people outside of the region seemed to notice. By the following summer, however, Kashmir was firmly on the world's radar screen. Why? In February 1989, the last Soviet soldier withdrew from Afghanistan. The transformation of Afghan warfare from jihad to chaos in the 1990s propelled an upsurge of violence in Kashmir, where a decade's worth of fighting left upwards of 50,000 dead. When the Russians left Kabul, so did many of the foreign mujahideen, or Islamist fighters. They had to go somewhere. And for many of them, somewhere was Kashmir.

This achingly beautiful land, previously known in the West largely as the title of a Led Zeppelin jam, had experienced periodic insurgency for decades. Not until the Soviets left Afghanistan, however, did its conflict become a global problem. When U.S. combat troops complete their withdrawal from Afghanistan in December 2014, and training units follow two years later, the dynamics that turned Kashmir into both a target and an incubator of global terrorism may be repeated: Thousands of the war-tourists who've spent a decade battling what they see as the invasion of a Muslim land by godless Westerners may shift eastward in their quest for another battlefield that pits Muslim insurgents against a predominantly non-Muslim army.

Though Kashmir was relatively calm for much of the last decade, the situation is again growing very tense. On Sept. 2, India said it had killed three militants affiliated with the Pakistan-based terrorist group Jaish-e-Mohammed (JeM) in a shoot-out in the region. Ten days earlier, soldiers from India and Pakistan exchanged fire along the Line of Control, which divides Pakistani and Indian Kashmir, killing several civilians; India claimed to have discovered a 55-yard infiltration tunnel snaking under the militarized boundary. And in October 2013, Indian Army chief Gen. Bikram Singh charged Pakistan with infiltrating a group of several dozen militants across the Line of Control — perhaps the largest such movement in a decade, and one of several detected in 2013 alone. (More worryingly, the scope of undetected infiltrations is — by definition — unknowable.)

Residents of the Indian state of Jammu and Kashmir have generally been the victims in a conflict fomented by outside actors: Indian security forces, Pakistan's spy service, and terrorist groups based largely in the Pakistani province of Punjab. New Delhi sparked the most recent insurgency, providing a ready-made pitch for militant recruiters: In 1987, it blatantly rigged state assembly elections, and after the imposition of virtual martial law in 1990, it deployed several hundred thousand soldiers and paramilitary troops as a de facto army of occupation.

Much of this is now history. The insurgency has ebbed, as have the human rights abuses and the heavy-handed security presence; credible state elections have been held since 2002, if not earlier. But the landslide May election victory of the Bharatiya Janata Party (BJP), a center-right Hindu nationalist party led by Narendra Modi, could reopen barely healed wounds: Modi and his party advocate a radical restructuring of the relationship between Kashmir and the rest of India.

The only Muslim-majority territory in the nation, Kashmir is entitled to wide-ranging autonomy under Article 370 of India's constitution. But Article 370 remains largely unimplemented, and the BJP is committed to its abrogation. The BJP has also promised to repatriate 100,000 Hindus expelled from Kashmir in the early 1990s — an endeavor that would require the reintroduction of a vast and predominantly Hindu security force.

In order to tinker successfully with the state's delicate balance, an Indian leader would need abundant personal credibility on Kashmir, minority rights, and Muslim issues. In precisely these areas, Modi is perhaps the most polarizing leader in modern Indian history. On his watch as chief minister of Gujarat, police failed to prevent the slaughter of some 1,000 Muslims in pogroms in 2002. During the 2014 campaign, Modi advocated accepting Hindu refugees from Bangladesh, but forcibly repatriating Muslim ones. If he turns rhetoric into action, or if he responds to provocations with harshness rather than restraint, Modi could trigger a new round of rebellion in Kashmir.

But it takes two to tango, and India has always found Pakistan a keen dancing partner when kicking up a storm in Kashmir. During the 1990s, the insurgency might have burned out — despite Delhi's provocations — if not for strong support from Islamabad. In the late 1980s and early 1990s, Pakistan supported indigenous Kashmiri militant groups, such as the Jammu and Kashmir Liberation Front and Hizb-ul-Mujahideen. From the mid-1990s onward, however, Inter-Services Intelligence (ISI), Pakistan's powerful espionage agency, shifted most of its support to Pakistan-based groups such as Lashkar-e-Taiba (LeT) and JeM. ISI supplied (PDF) arms, funds, and safe havens for the training and recruitment of fighters. To facilitate the infiltration of militants into Kashmir, Pakistani Army units would initiate artillery duels with their Indian counterparts in order to cover the movement of units across the Line of Control dividing the Indian and Pakistani-held parts of Kashmir.

Islamabad may have already resumed its policy of pushing militants into Kashmir to keep dangerous veterans of the Afghan campaigns from destabilizing Pakistan itself. During the 1980s in Afghanistan, Pashtuns, Tajiks, Hazaras, and other ethnic communities typically fought in ethnically segregated mujahideen militias, but against a common Soviet enemy. After the Soviet withdrawal, this shared purpose started to disintegrate. The battles of Afghanistan throughout the 1990s were fought not only between Muslims but — with very few exceptions — among Islamist militias. For some foreign fighters, this was still a battle worth waging: Pashtuns from Pakistan's border areas eagerly took up arms in support of their ethnic brethren. But for the Punjabis who dominated the membership of groups like LeT and JeM, the conflict seemed more like an ethnic brawl than a jihad.

In Kashmir, however, the battle lines were far more distinct: Abused Muslims fighting against (as the militants saw it) an abusive non-Muslim occupying force. Pakistan facilitated the redirection of mujahideen from Afghanistan to Kashmir, seeing it as a win-win situation: It kept India off balance, and prevented these murderous groups from returning to Pakistan.

The same migration may take place after the withdrawal of U.S. troops today. When U.S. forces depart Afghanistan, many Punjabi and other foreign fighters may make exactly the same calculation that they made two decades earlier. And Pakistan, for exactly the same reasons as it had in the 1990s, may be eager to help.

The link between events in Afghanistan and Kashmir is important to India and to Pakistan — but why does it matter to the United States? Primarily because the terrorist groups active in Kashmir during the 1990s expanded their target list to include Western citizens and interests — and since doing so, they have not turned back to more narrowly defined local ambitions. LeT used the Kashmir struggle to grow from a virtually unknown militant group into one of the world's most dangerous terrorist organizations. They demonstrated their threat to U.S. citizens and interests with their 2008 assault on Mumbai, which killed four Americans and left two injured; the United States currently has a bounty of $10 million on LeT's founder, Hafiz Saeed.

JeM was created in 2000 from a tangle of precursor groups that had been active for over a decade. One of these groups may have kidnapped and executed five Western tourists in Kashmir in 1995. Soon after JeM's founding, it may have cooperated with al Qaeda in the kidnapping and execution of U.S. journalist Daniel Pearl in Karachi in 2002. Omar Saeed Sheikh, one of the closest associates of JeM founder Masood Azhar, is serving a life sentence in a Pakistani prison for Pearl's murder.

Both LeT and JeM have their roots in Afghanistan — but turned into terrorist groups of concern to the United States only after shifting their focus to Kashmir. Moreover, these and similar groups became potent generators of splinter cells and radicalized individuals. For example, Ilyas Kashmiri — one of al Qaeda's top leaders until his death by drone strike in 2011 — fought first in Afghanistan and later in Kashmir under JeM's main predecessor.

U.S. strategists have been caught flat-footed by the speed with which radical groups can adapt and evolve. Before 9/11, many saw al Qaeda as an annoyance rather than a genuine national security threat; U.S. strategists were a step behind the group's movement, which migrated from Sudan to Afghanistan to Pakistan to franchises throughout the Middle East and Africa. Even as late as May 2014, the Islamic State of Iraq and al-Sham (ISIS) was an obscure al Qaeda offshoot, little noticed even by terror wonks; by August, the organization, calling itself the Islamic State (IS), controlled much of Iraq and Syria. It now poses a threat that U.S. Secretary of Defense Chuck Hagel described as more dangerous than al Qaeda itself — indeed, “beyond anything that we've seen.”

No group in Kashmir is likely to turn into a new IS. But a few months ago, nobody thought it likely that ISIS would turn into a global threat. The time for contingency planning is before a shape-shift — particularly one as predictable and historically grounded as the possibility for jihadist fighters to flow from Afghanistan to Kashmir after the withdrawal of foreign troops. An effective response will require coordination with Delhi — and either cooperation or confrontation with Islamabad. One lesson from the 1990s should inform all strategic planning: What happens in Kashmir does not stay in Kashmir.

This commentary appeared on ForeignPolicy.com on September 5, 2014.