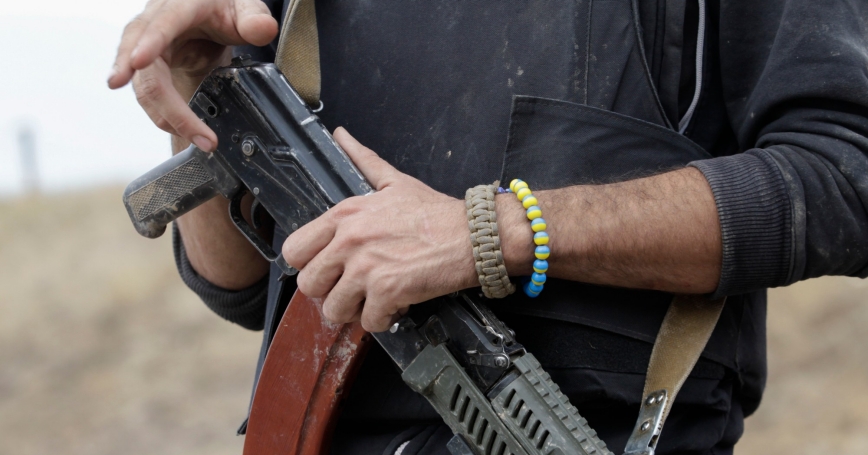 A soldier from the Ukrainian self-defense battalion "Azov" stands guard at a checkpoint in the southern coastal town of Mariupol, September 8, 2014

To date, fighting in Eastern Ukraine has taken the lives of thousands, with hundreds of thousands more displaced. For the United States and its European allies, the ongoing crisis has spurred a fundamental rethinking of strategy toward Russia. The allies blame Russia for both starting and exacerbating the unrest and violence, by sending forces and equipment to fight alongside Eastern Ukrainian separatists. Russia, for its part, claims it is innocent of such actions. It argues that U.S. and European Union sanctions, North Atlantic Treaty Organization military posturing and bilateral and multilateral support for Ukraine's government is at the heart of Moscow's reevaluation of its relationships with the EU, the U.S. and NATO.

The mutual recriminations reflect a striking dissonance between the Russian and the NATO/EU/Ukrainian narratives about this conflict. They also make it difficult to see how — even should the newly signed cease-fire hold and the bloodshed in Ukraine cease — there could be a way back to the status quo of last fall, before the uprising that eventually toppled the government of Viktor Yanukovych.

The EU countries and the United States were all perfectly aware of Russia's claims of “privileged” interests in Ukraine and other post-Soviet countries long before the current crisis. Russia specialists the world over were not surprised that Moscow was willing to interfere in Ukraine. The brief 2008 war with Georgia amply demonstrated that Russia would fight for its interests. What was surprising was that Russia annexed the Crimean peninsula and fomented unrest not in response to any military action or threat but in the context of political uncertainty after Yanukovych fled Kiev, shortly after signing an agreement promising greater power-sharing and early elections. Another shock was how handily the annexation of Crimea occurred, without bloodshed and with substantial reliance not on weaponry but on information campaigns.

East Ukraine has, of course, proved much bloodier. Less surprising, though still difficult for many to fathom, is how comfortably Russia tells stories about the events in the Ukraine that seem completely at odds with the reality on the ground.

Having expected a higher bar for Russian action in Ukraine, not a few in NATO are concerned that they may also have underestimated Russian designs on a range of European countries, including some NATO allies. They also are horrified that Russia has so blithely invaded another European state, a behavior many thought was a thing of the past. These concerns have prompted NATO to take steps to reassure nervous allies through more robust exercise and deployment plans, which, it is hoped, will also deter Russia from further adventurism.

NATO leaders have said repeatedly that they have no intention of military action in Ukraine itself, which is not a NATO ally, though they are looking for ways to bolster the Poroshenko government, including with military aid. Russia, in turn, has announced that it is crafting a new military doctrine in response to the possible movement of NATO military hardware further east, particularly to countries on or near Russia's borders. Any such potential movements have long been a clearly stated concern for Moscow.

Leaving aside the question of how long it will take Russia to craft a new doctrine — in Russia as elsewhere, such documents often take years to develop — what we are seeing today is escalation on two fronts. The first front is the direct conflict in Ukraine, which is, rhetorically and militarily, located between both Ukraine and the separatists and Ukraine and Russia. The second front is the escalation of tension, words and force movements between NATO, which includes the United States, and the EU on the one side, and Russia on the other.

It is possible, and very much hoped, that the first conflict will have a peaceful resolution. Events of the last week seemed promising, what with Poroshenko and Putin talking, a cease-fire agreed and Putin putting forth a seven-point plan for moving forward which, while continuing to deny a Russian role, is otherwise not unreasonable. The problem, though, is that Russia has consistently talked a good talk throughout this crisis, even as its actions have continued to make things worse. For sustainable progress to be made, Russia will need to end military support for the separatists. If this happens, it is plausible that Kiev and Moscow can reach a lasting deal and the Poroshenko administration could then embark on the tremendously difficult task of reintegrating Eastern Ukraine.

But in the context of NATO and EU relations with Russia, the damage may prove irreparable, in no small part because neither side is inclined to seek repairs. What trust in Moscow existed on the part of Washington, Brussels and other capitals has been decimated not only by Russian behavior but by what is seen as a consistent pattern of Russian lies regarding its actions. Even with a solution in Ukraine, Russia faces the tremendous task of reassuring the NATO alliance that it means it no harm.

Meanwhile, although NATO has taken steps to signal that its intentions are defensive — with talk of rotational rather than permanent presence, for instance — it is not clear that Russia reads those signals as NATO intends. Russian pronouncements of a hostile NATO is not something it can walk back from with ease, particularly if this becomes entrenched in doctrine. Finally, of course, if there is no deal on Ukraine, things will get still worse, with more sanctions, more force movements and more ugly recriminations, even as Ukrainians continue to die.

This is not a new Cold War. The Cold War was a global standoff between superpowers. Russia, like the United States, has a huge nuclear arsenal, but, other than rhetorically, Moscow does not challenge Washington on the world stage. However, it does appear to be the start of a dark, distrustful and prospectively very dangerous period in European history. Periods like this call for capable diplomacy, open channels of communication and clear strategies. At present, at least the latter two appear to be absent, but they can be developed in time, particularly with capable diplomacy in place. Ending such periods, however, calls for clear mutual intent to solve problems, build trust and move forward. That, I fear, may prove even more elusive.

This commentary originally appeared on U.S. News & World Report on September 5, 2014. Commentary gives RAND researchers a platform to convey insights based on their professional expertise and often on their peer-reviewed research and analysis.