The More Options, the Better 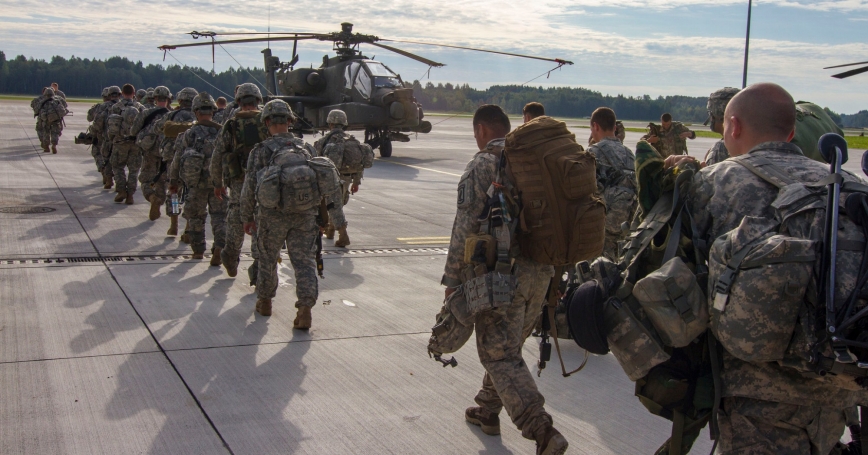 Paratroopers depart Lielvarde Airbase, Latvia, Sept. 8, 2014, at the conclusion of a NATO exercise involving over 2,000 troops from 10 nations that focuses on increasing interoperability and synchronizing complex operations

In many ways, leadership is about reducing risk by choosing the best possible option. Without options, leaders are left to the whims of a system they can't influence. With options come difficult debates, tough decisions and ultimately a more satisfying outcome. It's good to have options.

But options must remain consistent with and responsive to changing political and global environments. Automatic spending cuts triggered by sequestration in the U.S., Europe's austerity measures and other profound security challenges around the world can limit what options are viable.

This is particularly true in the military sphere. In Iraq and Syria, for example, questions arise daily about what the United States might do alone, or as part of a coalition, in response to the threat of the Islamic State group. The jihadist forces have committed heinous acts against Western powers, significantly disrupted a country and its people on their way to a more peaceful existence and made no secret of their greater global ambitions. Now, senior military and civilian leaders are engaging in vigorous discussions about what role the United States, and particularly the military, should play.

Airstrikes on key targets? Minimal ground forces in support of the Free Syrian Army? Troops on the ground in direct combat? All these can be discussed, debated, contemplated and analyzed. Without a range of options, the decisions on what, if anything, to do might be simpler but may not result in the best answer. By providing the nation's decisionmakers with multiple options, the U.S. military allows for a healthy debate and eventually a vetted decision. However, this may not always hold true.

Sequestration was part of the Budget Control Act of 2011, and if sequestration were fully implemented, how many options might be taken off the table? The U.S. armed services have detailed what reduced budgets might result in: the extent of force reductions, cuts to readiness and lags in modernization. They have discussed the problems those automatic cuts would create in meeting the overall national strategy (PDF). We at RAND have looked at similar problems arising in Europe because of austerity measures and what that might mean for U.S. force planning. The effect such cuts might have on available options for the U.S. to confront ongoing problems in the world remains to be seen. Choices that seemed rational several months ago are suddenly being seen differently.

Air Force Gen. Philip M. Breedlove, supreme allied commander in Europe, for example, is currently reconsidering significant changes to European posture given Russian movements into Crimea and Ukraine. Having options for how the United States might respond, through changes in posture or otherwise, is necessary to guard U.S. interests. To even discuss such options means having the right forces, at the right readiness, with the right capabilities. Recently, Gen. Raymond T. Odierno, chief of staff of the Army, discussed the possible use of ground forces to counter the Islamic State group in an escalating situation. Only nine months ago, such a suggestion would have been dismissed as completely alarmist. Imagine a future where forces were simply not available to even begin these discussions.

Building and maintaining a military is not sui generis with using a military. However, a great nation should have ample options available so that those in charge can make informed decisions about defending the country's interests. Preserving the ability of the United States to choose how it will respond to global events is essential. And maintaining options is critical to the calculus.

Christopher Pernin is a senior scientist at the nonprofit, nonpartisan RAND Corporation and director of the RAND Arroyo Center's Force Development and Technology Program.

This commentary originally appeared on U.S. News & World Report on September 23, 2014. Commentary gives RAND researchers a platform to convey insights based on their professional expertise and often on their peer-reviewed research and analysis.