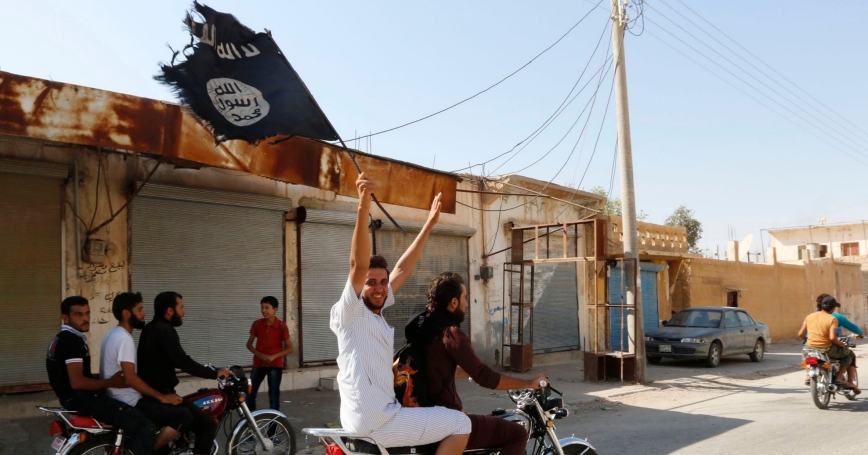 A resident of Tabqa city on a motorcycle waves an Islamist flag in celebration after Islamic State militants took over Tabqa air base, August 24, 2014

President Obama is laying out his strategy to counter the Islamic State, whose rampages across Iraq and Syria have riveted Americans' attention on a zone of conflict that many had hoped to forget. Many are urging him to step up military action. But if Obama wants to defeat the jihadis, he will need more than airstrikes—he should follow the money.

For all that ideology, religious belief and perhaps a lust for violence and power might motivate those who fight for the Islamic State (known variously by the acronyms ISIS and ISIL), money is what keeps the group going. As with any state, ISIL has bills to pay and mouths to feed. Even for the world's richest terrorist organization—which, by all available accounts, ISIL is—money doesn't grow on trees, and nothing in the world comes for free.

So where does ISIL's money come from? As part of my research at the RAND Corporation, since late 2006 I have been studying the finances, management and organization of the precursors to the Islamic State—Al Qaeda in Iraq and the Islamic State of Iraq—using their own documents, manuals and ledgers. More recently, RAND has teamed up with scholars from Princeton and Emory universities, as well as analysts from other organizations, to study more than 150 documents produced between 2005 and 2010. Although our work is still not yet done, we can draw a number of conclusions.

The most important thing for U.S. policymakers to remember is that ISIL now possesses the financial means to support a long-term fight—some $2 billion, according to a recent report in the Guardian, citing a British intelligence official. At the same time, ISIL's preferred fundraising methods and many financial commitments create vulnerabilities. The organization was badly damaged by late 2009, thanks to a combination of coalition and Iraqi forces, as well as intervention by the Iraqi government, and it can be badly damaged again. But without the establishment of a widely accepted, legitimate political order in Iraq, ISIL cannot be eradicated—and will continue to seek out and mete out cash.

ISIL raises most of its money domestically in Iraq and Syria. Its income streams include oil smuggled to other countries in the region, extortion, taxes—especially on non-Muslim minorities—and other essentially criminal activities.

Oil is ISIL's biggest source of revenue but also presents the biggest problem. ISIL controls about a dozen fields in Syria and Iraq, in addition to a number of refineries, including mobile refineries. Based on media accounts, RAND has estimated the total production capacity of these fields to be more than 150,000 barrels per day, although actual production is estimated to be much lower: The website Iraq Oil Report has reported that exports for the month of August at about 2.4 million barrels per day, for instance.

ISIL smuggles this oil out in tanker trucks—clearly visible from the sky should any drone pass overhead, so the smuggling is not particularly furtive. The group then sells the oil to whoever will buy it—reported in the media to be buyers in Syria, Turkey, the Kurdistan Region of Iraq and possibly in Iran and even Bashar Assad's regime in Syria, among other countries. Sales take place at rates deeply discounted from world prices. But even so, revenues have been estimated in the media at $1 million, $2 million or even $3 million per day.

We have seen this before. From 2006 to 2009, ISIL's predecessor, the Islamic State of Iraq, raised perhaps $2 billion through smuggled oil originating in the Baiji refinery in northern Iraq. This ended as a result of a concerted effort by U.S. and Iraqi forces to destroy the group and create the conditions in which the Iraqi government could exercise its law-and-order responsibilities, as well as vastly improved management at Baiji, owned by the Iraqi government.

So where does all of ISIL's money go?

ISIL historically has paid its members (yes, it maintains payroll sheets) based on a flat monthly rate per person and then additional fixed amounts for each wife, child and dependent unmarried adult woman in the household. In Anbar, Iraq, the rate was $491 per year in 2005 and 2006, and then about $245 per year per dependent; the rate was similar in Mosul in 2007 and 2008. These payments to family are meant to continue if the ISIL member is captured or killed—a primitive form of life insurance. If enough members are captured and killed, however, these costs start to mount.

ISIL also pays rent for its members in some cases—payments that might be bonuses to high-performing members, although we cannot be sure—and medical expenses for some members and their families. In the past, the group has sometimes hired lawyers to help get captured members out of jail. And it runs safe-houses and has to buy equipment. Guidelines published by a predecessor of the group say that expense reimbursements should be filled out in triplicate and explain where each copy goes within the organization. We don't know for sure whether ISIL today is making money or even breaking even, but at least in Anbar from 2005 to 2006, the money was being spent as fast as it came in.

As a cash-based organization, ISIL relies on couriers not only to deliver messages among its dispersed leadership but also to move money—follow the right courier and you get to the leadership. Because it deals only in cash, ISIL also needs to worry about the honesty of its members. We have seen instances of skimming for personal enrichment, as you might see in any cash-based criminal network.

As a state, albeit a twisted version of one, ISIL also has administrative expenses. It is responsible for making sure electricity and water flow and the roads stay repaired in the regions of Iraq it now controls—including parts of the Anbar, Ninewa Salah-al-Din, Kirkuk and Diyala governorates. Whether the group chooses to or is able to fulfill those responsibilities creates a vulnerability: A discontented population is unlikely to remain passive under ISIL's leadership.

Even if ISIL is making $3 million per day—at the higher end of the various estimates out there—then it makes slightly more than $1 billion per year. Just to be conservative, in case ISIL is doing more business than we're aware of, let's double that to $2 billion per year. Although exact totals are difficult to find, in 2013, before ISIL's advance, the Iraqi government spent far more than $2 billion per year running the governorates ISIL now controls, including salaries to civil servants, other costs of service provision and investment spending. That means ISIL likely isn't keeping up the same level of service that the Iraqi government once did. True, ISIL need not maintain that level—it hardly rules with the consent of the governed. But it's not only a problem that those under its rule can rebel, as happened in 2007 and 2008; with the exception of oil, the group's continued revenue-raising also depends on there being enough money to skim and extort from the economy, and this requires some minimum level of services and economic activity.

There is little that outside forces can do to halt the extortion and skimming that take place within ISIL territory. Oil smuggling, though, can be disrupted, at least to an extent. Intelligence resources from the United States, Iraq and any other country that takes on ISIL should be focused on identifying middlemen and buyers for the smuggled fuel and using any means necessary to halt those purchases.

It would be counterproductive to destroy oil field infrastructure, since repairs would be expensive and legitimate governments will need those oil revenues when they reestablish control. But mobile refineries should be targeted, and roads and other pathways that tanker trucks use to transport oil to and from oil fields should be made impassable by military means. The refineries and roads can be easily repaired when the time comes, but for now, ISIL should find it very difficult to move oil from fields.

Stopping ISIL will of course require much more than disrupting its funding. It will have to be defeated militarily, and legitimate, trusted governments will have to be established in Iraq and Syria to defeat the group over time. There's no simple path to achieving this, but as long as ISIL's coffers remain full, the task will not get any easier.

Howard J. Shatz is a senior economist at the nonprofit, nonpartisan RAND Corporation.

This commentary originally appeared on Politico on September 10, 2014. Commentary gives RAND researchers a platform to convey insights based on their professional expertise and often on their peer-reviewed research and analysis.