War Is Not the Word 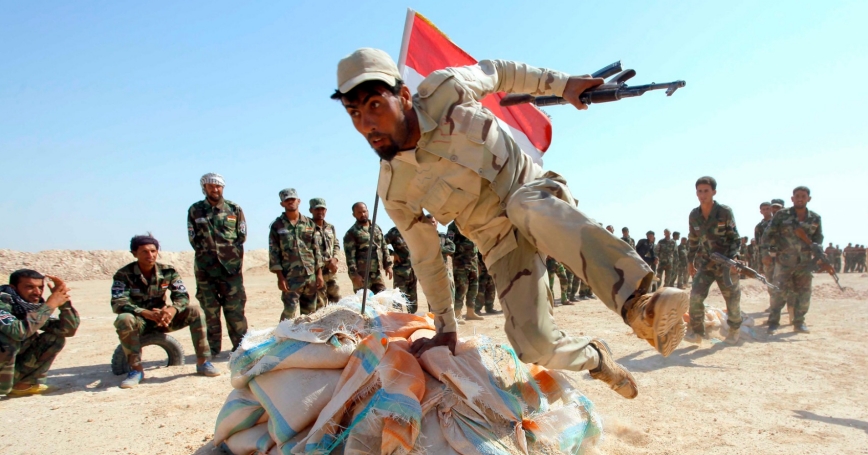 Shi'ite fighters, who have joined the Iraqi army to fight against the Islamic State, take part in field training in the province of Najaf, September 16, 2014

As Secretary of State John Kerry and Iraqi Prime Minister Haider al-Abadi work to assemble a coalition to support Iraq's fight against the Islamic State group (also known as ISIS or ISIL) and U.S. forces ramp up their airstrikes, the American public should understand some important aspects of irregular warfare.

First and foremost, the United States is not and should not consider itself at war with the Islamic State group. Doing so gives terrorists publicity and gravitas they do not deserve. Granted, the group threatens U.S. interests, but characterizing U.S. support to Iraqi operations as “war” is unnecessary and counterproductive.

Iraq is at war with the Islamic State group. This distinction is important because it helps everyone understand what the U.S. role is and what Iraq's role is. The Iraqi government and the Iraqi military need to work together to defeat the militants. Coalition forces need to carefully balance their efforts and provide just enough support to keep Iraq successful, but not so much that Iraq is no longer in the lead. Intelligence, surveillance, reconnaissance and air strikes, along with limited special operations and training, can support Iraq without subverting its sovereignty.

If U.S. soldiers are going to risk their lives for a partner, that partner must maintain a level of legitimacy and commitment worthy of U.S. soldiers' sacrifice and America's resources. Americans should manage their expectations and keep in mind both the limitations of irregular warfare and that “winning” does not have to mean destroying an ideology. It means leaving behind a self-sufficient partner that can provide security for its people. Iraqi military commanders will need to make great strides towards building a committed, loyal military in order for that to happen. And Iraqi leaders need to understand that U.S. support has limits. They need to know that the United States is prepared to withdraw again if Iraq reverts to political squabbling and sectarianism.

Third, the United States must continue to view the instability that spawned the Islamic State group as a regional problem. As such, an important feature of lasting security in the region should be an effective alliance that includes Iraq's neighbors. States like Turkey, Iran, Saudi Arabia and Jordan, which have much more at stake than the United States, should be integrally involved in helping Iraq.

Finally, as coalition forces help Iraq defeat the Islamic State group in western Iraq, the United States can then build from success and work to stabilize the chaos in Syria. This will require patience. Without a suitable, viable partner, U.S. options in Syria are limited. The United States can suppress militant forces and harass the forces of Syrian President Bashar Assad's, but the political utility of any involvement will remain aimless until the Free Syrian Army and other moderate rebels gel into a legitimate alternative to the Assad regime. Success in Iraq may breathe life into Syria's moderate rebels and encourage Syria's neighbors to more effectively isolate the Assad regime, but this too will take time. While conditions in Syria remain so uncertain, the United States should concentrate on Iraq, create success there first, and then build from that success in Syria.

Irregular warfare is slow and indecisive. It will be easy to criticize, as progress will depend on the capabilities of U.S. partners. However, with reasonable expectations, local forces in the lead, and regional alliances established, the conditions may be set for more resilient security.

Dick Hoffmann is a defense analyst at the nonprofit, nonpartisan RAND Corporation where he researches special operations, counterterrorism, and irregular warfare.