Air Campaign Against ISIS Is Just Getting Off the Ground 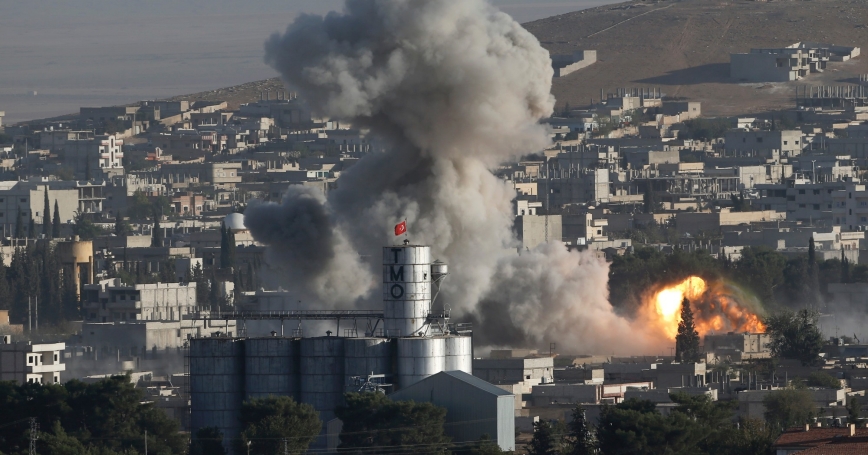 The stated objective of the American-led bombing campaign in Iraq and Syria is to “degrade, and ultimately destroy” the Islamic State in Iraq and Syria (ISIS)—language carefully crafted to imply a gradual process that may take months, even years. Yet just over two months into the campaign, some are already asking for results.

The United States began bombing ISIS targets in northern Iraq on Aug. 8 and extended its air campaign to Syria just over a month later. During that time, ISIS has been able to continue ground offensives in both Iraq (in Anbar Province and around Baghdad) and Syria (Kobani, on the Syrian-Turkish border). The battle for Kobani continues, although the most recent airstrikes appear to have allowed outgunned Kurdish fighters to recover portions of the besieged city. Still, it is far too early to judge the success or failure of the campaign.

More than 60 countries have joined the international coalition assembled to fight ISIS, with at least 12 participating in the air campaign. Eventually, this will be an impressive armada, but the multinational air campaign is still in its first stage, and most of the coalition participants joined the effort only recently.

If it is to have any lasting effect, the air campaign must gain the support of those in the region directly threatened by ISIS. Military missions have to support national objectives, which, in this case, involve more than merely killing jihadists. This too takes time.

Still, there have been some early successes. A possible massacre of Yazidi refugees fleeing the advancing ISIS forces has been averted. Continued American air support enabled Kurdish fighters to recapture several towns seized by ISIS and, by mid-August, the important Mosul Dam. American air support has also enabled Iraqi forces to drive back ISIS forces threatening the critical Hadith Dam.

It wasn't until Sept. 19 that French aircraft joined the campaign, striking the first targets around the Mosul Dam. At around the same time, Bahrain, Jordan, Qatar, Saudi Arabia and the United Arab Emirates began airstrikes on ISIS targets in Syria. British aircraft began flying combat missions over Iraq on Sept. 27. Australia, the Netherlands, Belgium and Canada joined the campaign earlier this month. Scores of other countries are providing various forms of logistics support for the air campaign, military assistance to Iraq or humanitarian aid.

As these dates make clear, the coalition's air campaign is just getting off the ground. Although a number of the participants are NATO members or have other experience working together in multilateral air campaigns, it will take time to sort out the dissemination of intelligence, assignment of missions, targeting procedures and attack protocols.

Each nation is likely to have its own domestic political constraints and rules of engagement. Some will attack targets in Syria, while others may not. Bombing fellow Sunnis is new territory for some of the Arab participants. The campaign comes just weeks before elections in the United States that will determine which party controls both houses of Congress, so criticism of the plan domestically may reflect the politics of the moment as politicians seek to exploit American anxieties and impatience.

All coalitions are fragile. Unilateral military efforts are always easier to manage, but this is not about just the application of military force. Military achievement will be irrelevant if it cleaves the coalition or swings public sympathy against the military effort. Right now, ISIS's calculated brutality has alienated world opinion. That advantage must not be squandered.

Judging by the numbers of sorties flown, ordnance delivered and targets destroyed, the air campaign thus far appears cautious. A few ISIS vehicles are being destroyed each day, reflecting the absence of concentrated targets. Small numbers of ISIS fighters are being killed.

According to Pentagon briefings, the United States is going after strategic targets in Syria that will weaken ISIS in the long run, but it will take time to observe results in the form of gradually diminishing operational capability. Other sorties are targeting tactical targets to assist local defenders in Iraq, but not in Syria. Since the coalition opposes the current Syrian government, it will not provide air support to Syrian forces.

The situation in Kobani is different. The battle there is between ISIS and Kurdish fighters on Turkey's border. Turkey joined the coalition on Oct. 2, but opposes the Syrian Kurds, whom it views as accomplices of separatist terrorists in Turkey against whom Turkey has fought for years. Turkey has deployed tanks and artillery on the Turkish side of the frontier, but has made no move to assist the Kurds on the other side, nor has Turkey allowed the Kurdish defenders of Kobani to receive reinforcements or military supplies through Turkey. The close proximity of the Turkish forces also makes it difficult to attack ISIS units close to the frontier. These political and operational complications could explain the slow start to the bombing around Kobani.

Providing close air support in fluid tactical situations is difficult, especially without trained observers on the ground—and this is especially true in urban combat. This problem limits the effectiveness of the air campaign, which is why some are calling for the deployment at least of American ground observers to call in and direct airstrikes. But that would expose Americans to capture and further hostage situations, which could create domestic political crises that would turn public opinion against the effort or compel escalation.

ISIS fighters can reduce the effectiveness of air power by spreading out and embedding themselves among civilians to deny attacking aircraft lucrative targets. While such maneuvers might make airstrikes less effective, they also reduce ISIS's combat capability, which is a positive result. The determination to reduce the risk of civilian casualties to a minimum also argues for extreme caution. One tragic mistake can upset the coalition.

Some doubt whether such a limited and tightly constrained air campaign can succeed. Even if they have increased air support, without ammunition, Kobani's defenders may not be able to hold off continued ISIS attacks. Meanwhile, ISIS forces continue to press toward Baghdad. Backs to the wall, the Iraqi Army and Shiite militias should be able to prevent ISIS from taking over Baghdad.

Kobani could fall, and ISIS fighters could enter Baghdad, even as airstrikes whittle down the organization's operational capabilities. In any conflict, there will be successes and setbacks. This does not mean that the air campaign can be judged a failure or that it cannot succeed without the deployment of U.S. ground forces. Military campaigns, especially complex multinational engagements like this one, take time to work. This one deserves more.

This commentary originally appeared on The Hill on October 17, 2014. Commentary gives RAND researchers a platform to convey insights based on their professional expertise and often on their peer-reviewed research and analysis.