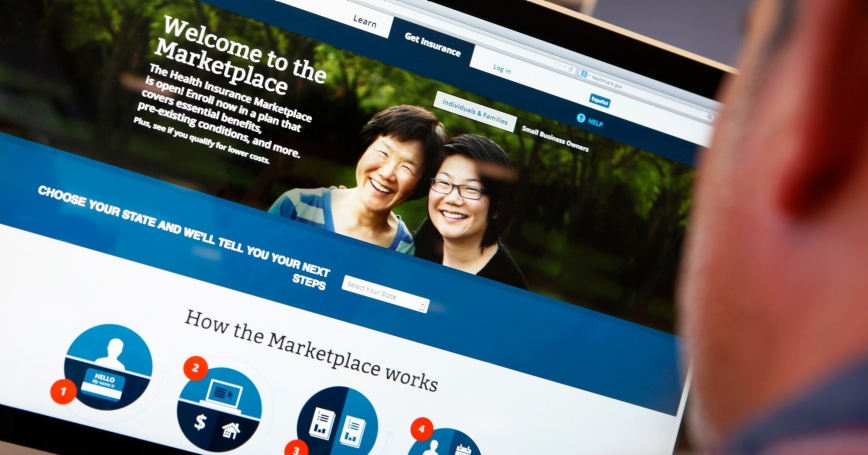 A man looks over the ACA signup page on HealthCare.gov, October 2, 2013

This month marks the one-year anniversary of the health insurance Marketplaces—the online exchanges for buying and selling insurance created by the Affordable Care Act (ACA). Last year, after a near disastrous start that included massive website failures, the Marketplaces rebounded to a surprising success. Just over 8 million people signed up for Marketplace plans and 7.3 million paid their premiums, making them officially enrolled in health insurance coverage. These enrollment levels were almost exactly on target with what the Congressional Budget Office had predicted for 2014. Since the rollout of the Marketplaces and other policies included in the ACA both federal and independent surveys have pointed to a marked reduction in uninsurance in the United States. According to a recent analysis published in the New England Journal of Medicine, 10.3 million people became newly insured between September 2013 and April 2014, causing the uninsurance rate for adults age 18 to 64 in the United States to drop from 21.0 to 16.3 percent.

That still leaves over 33 million people uninsured. Next month, the 2015 open enrollment period begins, offering a second opportunity for individuals to get insured. One key question is whether the large increases in enrollment that occurred over the past 12 months will continue into 2015. The Congressional Budget Office estimates that 13 million people will have Marketplace plans next year, implying that another 6 million must select a plan and pay their premiums in order to meet the target. Premium decreases, which have occurred in some major markets such as Denver and Seattle, may help to spur additional enrollment in 2015. Individual mandate penalties (which increase in 2015), better familiarity with the law, and a larger selection of insurance plans may also serve to bolster 2015 enrollment levels. Yet people who, to date, have held out on getting insured may be harder to reach than those who signed up in 2014. Last March's surge in enrollment was credited in part to social media campaigns and celebrity prodding; the extent to which these tools will be used in 2015, or if they will be as effective as they were during the first open enrollment period, remains unclear.

Another critical question is whether the people who have become insured through the Marketplaces find it worthwhile to remain covered in those plans. Many Marketplace plans have deductibles in excess of $2,000 for an individual; some silver plans—the most commonly selected plan type—have deductibles as large as $5,000. In contrast, the average deductible for workers covered by employer plans is about $1,200 according to the most recent data published by the Kaiser Family Foundation. The implication is that some enrollees in Marketplace plans may continue to face high out-of-pocket costs for health care—a potentially unwelcome surprise for the newly insured.

In addition, some plans on the Marketplaces appear to be keeping premiums low by restricting enrollees to narrow networks of health care providers. In 2014, over 20 percent of plans offered on the federally-run Marketplaces were “exclusive provider organizations,” according to data available through Healthcare.gov. Exclusive provider organizations limit coverage to in-network providers, and require enrollees to pay the full price of any non-emergency health care provided by out-of-network doctors or hospitals. The implications of narrow network plans are not fully known, but they raise two major concerns. First, in-network providers may not have the capacity to provide timely services to all enrollees, particularly if enrollment levels continue to rise in 2015. While we do not yet know the extent to which narrow networks might cause capacity problems in Marketplace plans, lack of access due to limited provider participation has been well-documented in the Medicaid program. For example, a 2012 study by researchers at the University of Colorado and the Oregon Health and Science University found that Medicaid enrollees were almost twice as likely as privately-insured individuals to face barriers to timely primary care.

Second, there is a risk that consumers may use out-of-network care without fully understanding the financial consequences, resulting in high health care bills that must be paid out-of-pocket. A recent study conducted by the Georgetown University Health Policy Institute found significant confusion among both patients and providers in understanding plan networks, as well as concern over inaccurate and out-of-date provider directories. In California, two lawsuits have been filed against Anthem Blue Cross, alleging that the insurer misrepresented the network of providers available to enrollees, leading consumers to incur high health care bills.

The potential for consumer disenchantment due to high out-of-pocket spending and narrow provider networks should not detract from the ACA's initial successes in signing up enrollees and reducing uninsurance in the United States. But these challenges imply that policymakers must remain vigilant. Meeting the ACA's goals requires that individuals not only have coverage, but that coverage is affordable, protects consumers against catastrophic health spending and, ultimately, promotes the general health of the population.

This commentary originally appeared on The Morning Consult on October 16, 2014. Commentary gives RAND researchers a platform to convey insights based on their professional expertise and often on their peer-reviewed research and analysis.