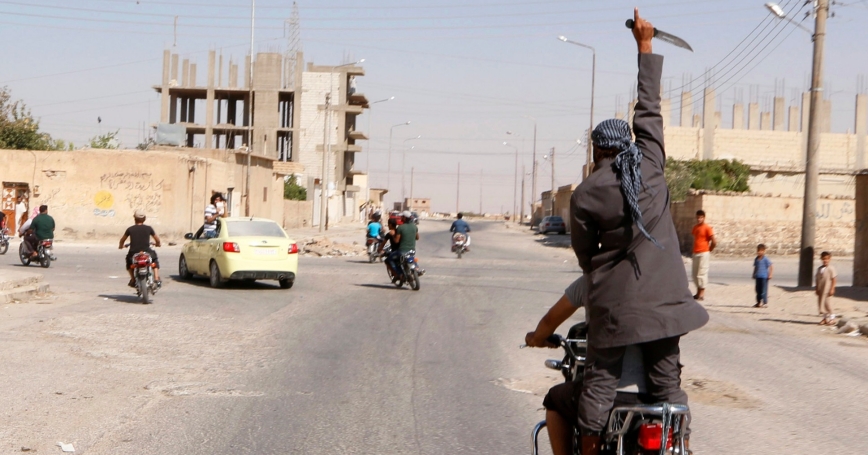 A man holds up a knife as he rides on the back of a motorcycle in celebration after Islamic State militants took over Tabqa air base, in Raqqa, Syria, August 24, 2014

The U.S.-led coalition fighting the Islamic State in Iraq and Syria is taking aim at the terrorist organization's pocketbook. The coalition has launched airstrikes on mobile oil refineries in eastern Syria that the Pentagon believes generate up to 500 barrels of petroleum each day for the group.

The Islamic State has emerged as the world's richest terrorist group, with estimated assets of $1 billion to $2 billion. Its sophisticated and strategically driven financial scheme is a key reason that U.S. officials say this fight could last years.

An examination of newly declassified financial documents the group created dating to 2005 reveals an organized criminal operation that is funded through rackets like protection, extortion and the co-opting of the region's oil industry. This makes the group a self-sustaining operation, largely free of reliance on the largesse of wealthy foreign patrons. While airstrikes may disrupt the flow of oil and profits, they will not lead to the group's financial ruin anytime soon. Based on our research, we estimate the Islamic State will bring in $100 million to $200 million this year. And that's being conservative.

Most of its profits come from Iraq and Syria, though it smuggles oil to other countries in the region. And it has to get that money from these countries back into Iraq and Syria somehow—either through money laundering or through informal financial institutions. With about a dozen oil fields and a number of refineries under its control, the Islamic State has plenty of oil to sell to the tune of millions of dollars per day.

This is not new. The documents indicate that the Islamic State raised hundreds of millions of dollars through oil smuggling and racketeering. What is new, though, is how much it has in its coffers to sustain itself in pursuit of a broader Islamic State.

The Islamic State has built its organization using a financial strategy characterized by ruthless efficiency and pragmatism. It spends money on organizational necessities such as equipment, weapons and facilities like safe houses. It pays a small, flat rate to each member, and adds a premium for each wife and child a member has.

Records show that in 2005-06, the rate in Iraq's Anbar province was $491 a year, with an additional $245 per year for each dependent. The group pays the premiums even after operatives are captured or killed, and helps its fighters with rent, medical expenses, legal costs and performance bonuses, all of which are audited to mitigate potential abuse. Taken together, its own documents show it has long invested in its organization, growing its infrastructure base and incentivizing recruits to join and existing members and their families to remain loyal.

The group is also making long-term investments in state building. This, too, requires money that can be invested in administering controlled territory and establishing institutions to implement and sustain sharia governance. In some areas, it is able to provide reliable electricity, access to clean water and serviceable infrastructure. But in the areas it controls, it invests in bureaucracies that consolidate sharia law.

While the group has hardly mastered the provision of public services, it is governing its territories to an extent, paying salaries to civil servants, facilitating trade, collecting taxes and engaging in other forms of statecraft aimed at keeping populations content and passive.

Dismantling its financial empire will take more than airstrikes and will require engagement from a new government in Iraq that includes Sunnis. Enhanced U.S.-Iraqi intelligence cooperation also can help to root out the group's financial system, including the informal network of money brokers known as hawalas.

In addition to airstrikes on and around refineries, Iraqi and Kurdish forces should seek to take back oil assets from the Islamic State in northern Iraq. And Baghdad should form a joint strategy with other regional players like Jordan, Turkey and the Kurdistan regional government to attack the group's oil operations and clamp down on trade-based money laundering and hawalas (money exchanges) that do business with the Islamic State.

Hitting the Islamic State in its pocketbook will be critical if the terrorist group is to be defeated. Striking its refineries is one step, but ultimately, it will take a concerted international effort buttressed by sustained local measures to cut off the riches with which the Islamic State was built.

Patrick B. Johnston is a political scientist and Benjamin Bahney is a member of the adjunct staff at the nonprofit, nonpartisan RAND Corporation.

This commentary originally appeared on Newsday on October 5, 2014. Commentary gives RAND researchers a platform to convey insights based on their professional expertise and often on their peer-reviewed research and analysis.