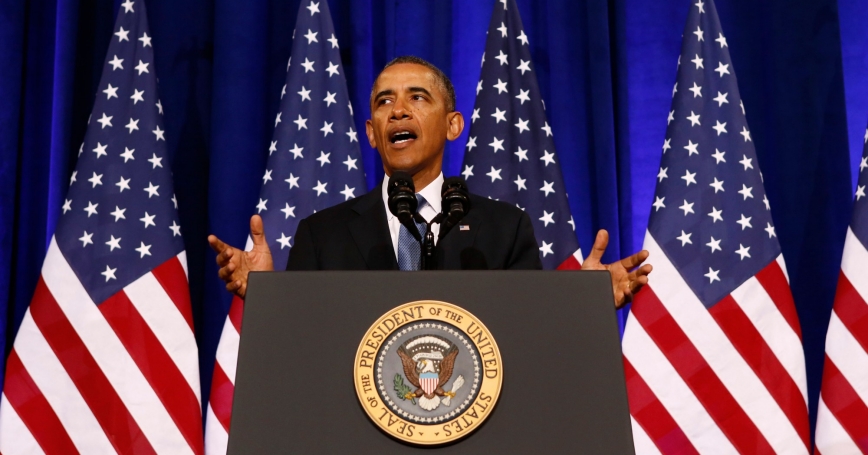 President Obama has been repeatedly accused of delay. Critics say he dragged his feet on sending more troops to Afghanistan, on addressing the dangers in Libya, on providing support to Syria's rebels and, most recently, on initiating military action against Islamic State.

But is that necessarily such a bad thing? Calculated delay has a long history as an effective military strategy, dating back at least to the Second Punic War in the 3rd century BC.

At the time, Hannibal's Carthaginian army, including his war elephants, had successfully made its way from North Africa through Spain and across the Alps to invade Italy from the north. There, Hannibal's troops inflicted two stunning defeats on Rome's mighty legions, throwing the country into panic.

During ordinary times, the Roman Republic was governed by a senate and two elected consuls who served together for one-year terms. But in times of national crisis, the senate had the option of appointing a dictator to streamline command. In the face of Hannibal's advance, the senate appointed Quintus Fabius Maximus, who at that point had served two terms as consul.

Everyone expected Fabius Maximus, an admired leader and experienced general, to quickly march on Hannibal's forces, but he did not. Instead, he avoided major battles while harassing Hannibal's army around the edges, preventing the invaders from getting supplies, gradually wearing them down and degrading their capabilities. It was a strategy of containment.

But Romans were not pleased. Avoiding battle was un-Roman, an affront to the greatness of Rome. People called Fabius Maximus the Cunctator — the delayer. It was intended to be an insult.

Fabius Maximus was replaced by a Roman consul who was determined to engage Hannibal directly. Under the command of the new consul, eight Roman legions marched off to destroy Hannibal's forces. They met at Cannae, in what turned out to be Rome's greatest military disaster. Between 50,000 and 70,000 Roman soldiers were slain and 10,000 more were taken prisoner.

The disaster at Cannae suddenly made Fabius Maximus look brilliant, and Romans again looked to “the delayer” to save the republic. Cunctator became a title signifying prudence, wisdom and respect.

Other military commanders have since followed what became known as a Fabian strategy, among them George Washington, who, in the early years of the American war for independence, avoided head-on battles with the British.

The containment strategy of the Cold War was a Fabian approach in the sense that it made the avoidance of nuclear confrontation its primary objective. But it was also based on the message that, if attacked, the United States would retaliate with massive force. And it was understood by all that all-out nuclear war meant the end of the world.

Fabian strategies make sense in certain kinds of circumstances: against a stronger adversary, say, or when direct confrontation risks a catastrophic defeat or a larger conflagration. They also make sense in instances when time favors the side that opts to delay. In today's warfare, there is little risk of a single disastrous battle, but there is still risk of military fiasco and political ruin. Fabian strategies might make sense if there's a risk of becoming bogged down in a costly and seemingly futile military adventure. Or in cases where action carries a high risk of casualties that could turn people against the effort.

But even when holding back is the right choice, Fabian strategies are almost never popular at the time they're employed. People prefer quick victories to extended low-level campaigns. Time may erode morale and sap support for the effort. And a Fabian approach can anger hawks at home and dismay allies abroad. Warfare today is in part about the manipulation of perceptions, and Fabian strategies can look alarmingly like appeasement.

Moreover, there are times when a delay in forcefully confronting enemies can lead to disastrous outcomes. Should the world not have intervened earlier, say, to stop Hitler?

Historians will debate whether Obama's skeptical approach to entering conflicts reflects prudence or weakness. The evidence so far is ambiguous. The president has said the U.S. war on Islamic State will be “a long-term campaign” with no “quick fixes involved.” He set no deadline for its completion.

The administration has not publicly framed its approach as part of a Fabian strategy — no American administration would ever use the term. Sometimes action — or inaction — speaks louder than words.

Brian Michael Jenkins is senior adviser to the president of RAND Corp. and the author of "The Dynamics of Syria's Civil War."

This commentary originally appeared on Los Angeles Times on October 22, 2014. Commentary gives RAND researchers a platform to convey insights based on their professional expertise and often on their peer-reviewed research and analysis.