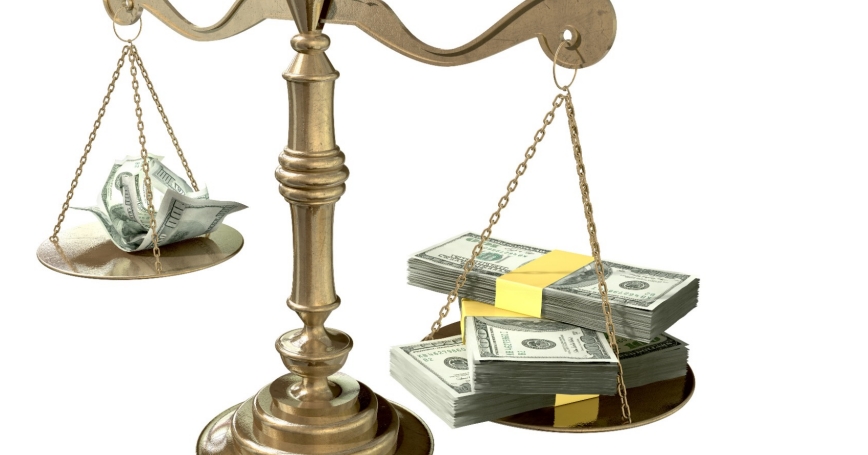 Over the next five weeks, RAND will be conducting a series of surveys leading up to the midterm elections. In addition to asking about voting intentions, we'll be asking about some of the nation's most pressing issues.

Research documenting increasing income inequality, including Thomas Piketty's Capital in the Twenty-First Century, has led to growing interest in and attention to this subject. Over the coming weeks, we'll ask several questions to better understand the nation's attitudes toward inequality and what might be done about it.

In the first of our weekly midterm election surveys, respondents were asked their opinion on the role of government in addressing income inequality. The question text is given below. This same question has been intermittently asked of new samples by the General Social Survey since the late 1970s though 2012. Respondents were divided into two groups: those who leaned toward “government ought to reduce income differences” (responses 1, 2, and 3) and those who leaned toward “government should not concern itself with reducing income differences” (responses 5, 6, and 7).

The time trend in Figure 1 shows that the share supporting and opposed to government reducing income differences tend to mirror one another; the middle-ground response was constant at roughly 20 percent throughout the period. In our new 2014 data, 42.8 percent report that government should generally reduce differences, while 39.2 percent think government generally should not. Overall, the national-level attitude has consistently averaged between 3.5 and 3.9 on the seven-point scale (toward favoring government action). 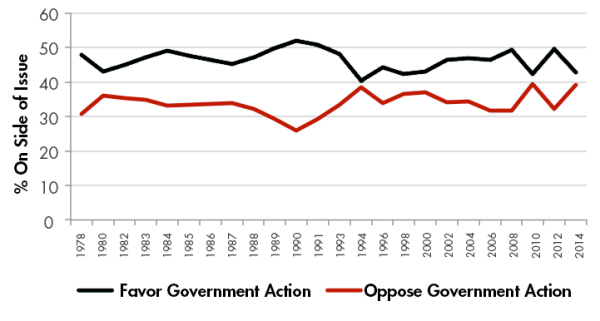 Figure 2 presents attitudes by party affiliation during the same time period. Individuals who identify themselves as Democrats tend towards supporting government action, hovering around a mean of 3 on the scale throughout the period, trending slightly toward stronger attitudes supporting government action. Conversely, over time the mean value for Republicans has been increasing (where 1 = government ought to reduce income differences and 7 = government should not concern itself with reducing income differences), implying that Republicans are less likely to support government policies to address income inequality. 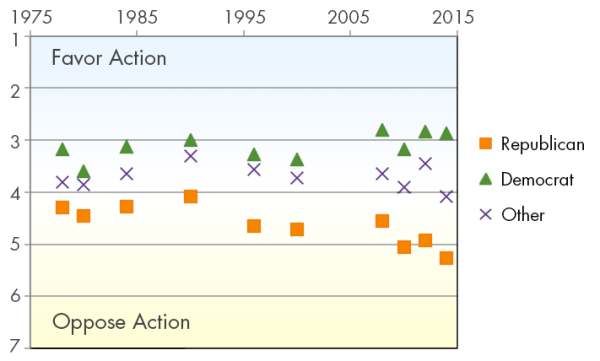 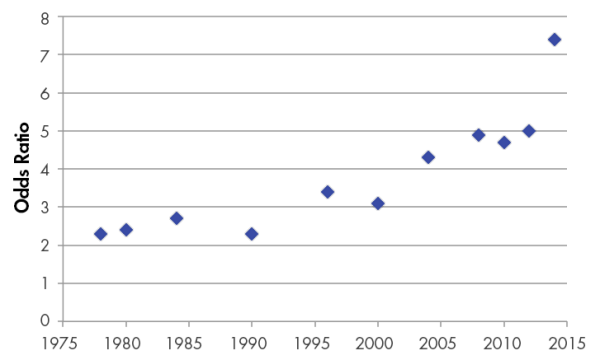 Trends in support or opposition for government action within party are shown in Table 1. The increasing concentration in the extremes by political orientation is most notable post-2000.

This remarkable polarization in attitudes reflects that attitudes among Democrats and Republicans are increasingly shifting toward the respective extremes. The overall average national opinion on the role of government has not changed over time, but the correlation between party identification and attitude has increased.

Katherine Carman is an economist and Michael Pollard is a sociologist at the nonprofit, nonpartisan RAND Corporation. Relevant questionnaire items and descriptive tables are available as a supplement to the methodology report.