Not to Worry, Israel 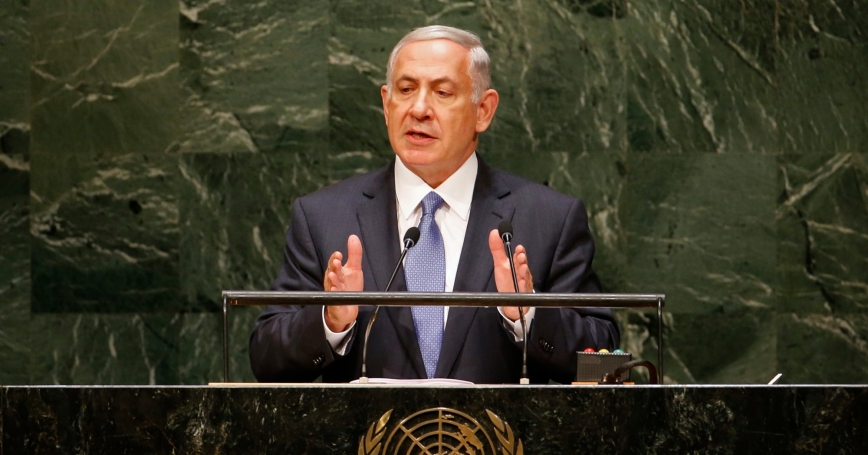 Israel's Prime Minister Benjamin Netanyahu tells the 69th U.N. General Assembly on September 29 that a nuclear-armed Iran would pose a far greater threat to the world than Islamic State militants.

Although the prevailing wisdom among Iran-watchers is that a nuclear deal is unlikely to be reached by the Nov. 24 deadline, some Israelis nonetheless worry that America's fight against the Islamic State group is distracting from the Iranian nuclear challenge. Israeli Prime Minister Benjamin Netanyahu made it clear in his U.N. General Assembly speech that he views the Iranian nuclear issue as an even greater threat than the jihadist group. Some Israeli analysts see the group's threat as working in Iran's favor, possibly leading to future interim or final agreements that offer better terms to Iran.

But the idea that the United States would make additional concessions to Iran in the nuclear negotiations because of the anti-Islamic State group effort is not based on realities on the ground. Iran does not need to be coaxed into fighting the group—it has plenty of its own incentives to bolster Iraqi security forces and Shiite militias to protect Baghdad and keep the Shiite-led Iraqi state together. In fact, that is exactly what the Iranians have been doing since the Islamic State group began making advances in Iraq's northern region. No promises of nuclear concessions were needed to prompt Iranian action against the jihadist group and protect its perceived national security interests.

Yes, the Americans and Iranians happen to be on the same side on this one (at least in Iraq), but this is an instance of coinciding interests, not a coordinated strategy or quid pro quo. The Iranians might like to project the myth that they have the upper hand in the Middle East, but in fact Iranian allies in Iraq and Syria are under significant pressure, and Iran's own domestic challenges remain a source of vulnerability. The incentive for Iranian leaders to negotiate a nuclear deal stems from such pressures, not from overly generous offers from the United States.

Indeed, the Islamic State group challenge has not appeared to alter the negotiating positions of the United States on the nuclear issue. Reports suggest that the gaps between Iran and the United States, U.K., France, Russia, China and Germany—the five permanent members of the U.N. Security Council plus Germany, commonly known as the P5+1—are as wide as ever. Despite the floating of various creative solutions to bridge some of these gaps, issues like levels of uranium enrichment, the duration of a deal and the timing of sanctions lifting are all extremely difficult and could derail a deal with or without the Islamic State group situation dominating the regional context.

The stakes of a nuclear deal are too great for the future stability of the region and for the status of the global non-proliferation regime—arguably still a high priority for the Obama administration—to suggest the United States would give Iran a free pass because of mutual concerns over the Islamic State group. Any deal would need to meet stringent enforcement and verification conditions in order to prevent the possibility of Iran turning its civilian nuclear capabilities into nuclear weapons without being caught.

To the extent that the Islamic State group challenge is affecting nuclear negotiations, it may, if anything, make American negotiating positions less, not more, flexible because of concerns about maintaining the regional coalition of Sunni states supporting the United States. Sunni partners, particularly the Saudis, are already skeptical of Iran adhering to a nuclear agreement. And despite growing alarm about the jihadist group and a slight thaw in Saudi-Iranian relations, the Saudis still view Iranian power and influence as the predominant regional concern. The United States will need to tread carefully in securing an agreement with Iran that will not further alienate its Sunni partners who have now become significant contributors to the administration's anti-Islamic State group strategy.

Ultimately these partners will likely accept a nuclear deal that is viewed as acceptable not only to the United States but also to Europe, Russia and China, even if they (along with the Israelis) may not like it. But with the Islamic State group fight, the United States has an even greater interest in backing a deal with Iran that is not viewed as capitulation by its Sunni partners.

In short, the Israelis probably have less to worry about regarding a nuclear deal with Iran than they might think. The chances of a deal failing are as likely as they were before the Islamic State group came on the scene, and in some ways may be even greater. But while the jihadist group may not make an agreement any more likely, a nuclear deal remains an important goal for U.S. national security interests, one that would remove at least one critical source for instability in a region already rife with unrest.

Dalia Dassa Kaye is director of the Center for Middle East Public Policy and a senior political scientist at the RAND Corporation. Follow her on Twitter @dassakaye.

This commentary originally appeared on U.S. News & World Report on October 23, 2014. Commentary gives RAND researchers a platform to convey insights based on their professional expertise and often on their peer-reviewed research and analysis.