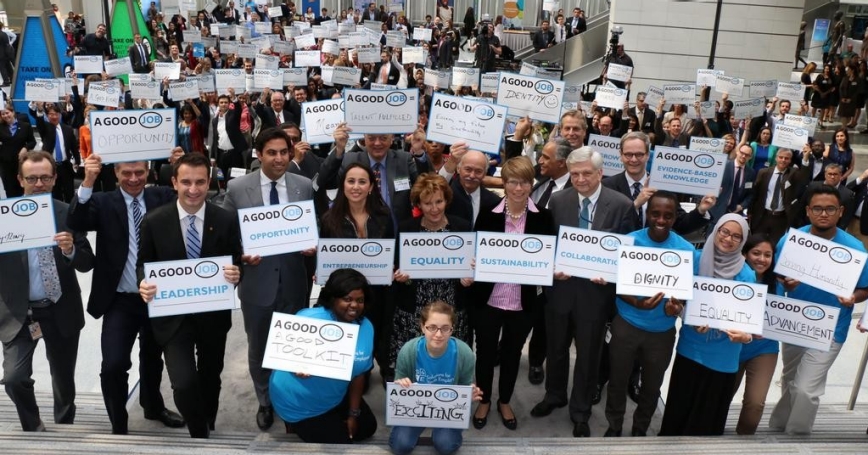 Youth unemployment is a pervasive and persistent worldwide scourge: 75 million youth are unemployed now, with the global youth unemployment rate expected to rise from 12.6 percent in 2013 to 12.8 percent by 2018 as the labor force continues to grow and an uneven economic recovery cannot generate enough jobs (PDF).

Unemployment figures, which have worsened with the 2008 economic crisis and its long-lasting effects, only scrape the surface of the problem. In regions of the world with high poverty, where 90 percent of the global youth population resides, underemployment is as much of a challenge as unemployment. Countries in South Asia and Sub-Saharan Africa have relatively low youth unemployment rates but have large numbers of the “working poor” — youths stuck in low-quality, irregular or informal jobs that barely provide income above subsistence levels. In Sub-Saharan Africa, 64 percent (PDF) of all workers receive less than $2 per day on average, while only 21.4 percent receive a regular wage or salary, compared to almost 50 percent globally.

In many low- and middle-income countries, unemployment rates would be even higher if they accounted for youths who have become so discouraged by and detached from ill-functioning labor markets that they are neither in education, employment nor training (NEET). In Latin America and the Caribbean, for example, one in five youths (PDF) fell into this category as of 2011.

In response to global challenges of youth underemployment and unemployment, Solutions for Youth Employment (S4YE) was founded by a unique coalition of partners from the public and private sectors and civil society. This coalition acts to increase youth opportunities for productive employment by linking the unique experiences and resources of partners and others, learning what employment solutions work through rigorous evaluation and dissemination of evidence, and leveraging actions to scale up evidence-based interventions. Founding partners include the World Bank, Accenture, International Youth Foundation, Plan International, RAND, and Youth Business International, among others. (RAND's participation is funded by the Pardee RAND Graduate School as well as by RAND's Center for Middle East Public Policy.)

The main atrium at the World Bank's Washington headquarters was abuzz on Oct. 8 with activities for the launch of S4YE. We were excited to attend, having worked with Peter Glick, a senior economist and director of the Center for Research and Policy in International Development, and Krishna Kumar, director of RAND Labor and Population and the Distinguished Chair in International Economic Policy, on the “learning” component of the coalition. That is RAND's main contribution to the effort.

Those at the event came to hear about S4YE, to be part of joint efforts led and coordinated by the coalition, and to see what S4YE elements may serve the goals of their organizations. It was refreshing and energizing to be in a hall filled with people passionate to share insights on this issue from diverse perspectives. The many participants who stopped by the RAND table included: nongovernmental organization (NGO) founders from the Dominican Republic (Edupass), Nigeria (Nigerian Council) and the United States (Opinno); leaders from multilateral organizations (Plan Japan, UNESCO); and journal editors (Globalization and Health), keen on hearing about RAND's involvement with S4YE as well as other international projects.

Moderator Oke aptly described the coalition's goal as “not just creating any kind of jobs, but creating really good jobs.” The distinction is important, as employment should go beyond providing a basic means to survive.

To generate discussion, each audience member and speaker filled out a placard with the words “A good job = __________,” By looking around, it became clear that that those in the room defined a good job as encompassing elements of what it means to live a satisfying life, with participants using terms like these: advancement, fulfillment, innovation and growth, personal dignity, and excitement!

The young people at the conference also dug deeper into their job views. Chernor Bah, a youth activist with A World At School, an education-focused NGO, said “a good job = human dignity.” That equation, he explained, includes: “Dignity to live a life capable of taking care of yourself, being in good health, dignity to be able to take care of family and fend for them, and above all, dignity to, through that job and in your own way, small or big, contribute to making the world a better place.”

Those at the event underscored that unless young people get launched into good jobs, their health, diet, housing, work skills, finances, and a myriad other aspects key to the long-term advancement of their lives, as well as the safety, security, and progress of their nations could be at risk.

We hope that the excitement and drive will sustain beyond this inaugural meeting as we work toward the goal of bringing millions of young women and men into productive work and out of poverty by 2030. Stay tuned to the Pardee Initiative Blog for updates on our progress with S4YE.

Crystal Huang and Nelly Mejia are assistant policy analysts at RAND and Ph.D. candidates at the Pardee RAND Graduate School. This blog was written for the Pardee Initiative for Global Human Progress.