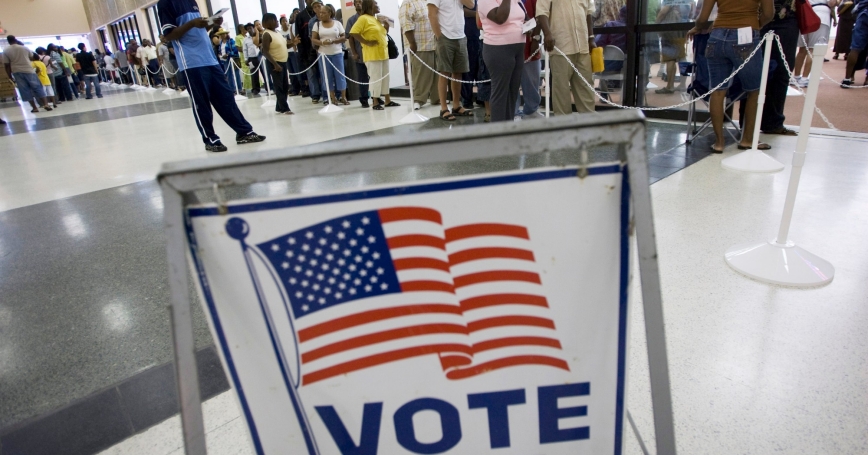 U.S. residents in line to vote

As part of an ongoing five-week series, RAND is surveying members of the American Life Panel (ALP) leading up to the midterm elections in November. These surveys ask ALP participants about their voting intentions, as well as their beliefs and opinions about a number of important current policy issues.

The Most Recent Results: House and Senate Elections

We surveyed 2,718 members of the ALP between 12:01AM Sunday Oct. 12 and 11:59AM Saturday Oct. 18. As with other surveys, we weight responses to ensure that results are representative of the national population, matching to the 2014 Current Population Survey. Additional information about the sample and weights are available in our methodology report.

One thing that sets apart our results from those collected by typical election polls is that we survey the same respondents each week. This allows us to observe how individuals' responses change over time. While our overall findings are constant over time, this stability masks significant churn in individual responses. In fact, among those who responded in both the first and third weeks of our surveys, many change which party they will support in the election. In what follows, we look at the responses of 2,287 individuals who said they would vote for a particular party or someone else in weeks one and three of the survey. We did not factor in their likelihood of voting. This allows us to consider just changes in the party supported. We calculate our sampling weights to account for non-response in the third week, as outlined in our methodology report.

As the following figure shows, there was little change in the mean of the reported probability of voting for any given party. The small observed changes are within the margin of error.

The underlying numbers, as suggested by the graph above, show no particular party gaining or losing ground. These results are included in our supplementary materials. These results are consistent with findings previously reported about churn in public opinion of the Affordable Care Act (ACA) where we typically found that each month 15 percent changed their opinion of the ACA between favorable, unfavorable, and “don't know.”

Even when overall findings are constant, there may be significant churn in the underlying numbers. Our longitudinal method allows us to observe these changes that typically cannot be observed in public opinion surveys. While our surveys have not asked about what drives these changes, there are several possible hypotheses. First, opinions are constantly being formed and shaped. As voters learn more about candidates, their opinions may shift. If this is the case, then it suggests that there is room for voters to change which party they will to vote for. This finding is particularly important in understanding voters in the middle, those who don't strongly support one party or the other. Second, some respondents may find it more challenging to answer these probability-based questions, leading to more inconsistency in their responses.

To better understand these changes, we look at what individual characteristics are most associated with changes in voting intentions. Democrats and Republicans are equally likely to switch, but Independents and those who identify as members of other parties, are 3 times and 2.5 times more likely to switch who they intend to vote for. We find that men are about 33 percent less likely to switch than women, Hispanics are 58 percent more likely to switch than white non-Hispanics, and the likelihood of switching decreases significantly with increased income. These results hold age, marital status, education, and working status constant. These results support our first hypothesis—that voters, primarily those not affiliated with either of the two major parties, are changing their minds about who will receive their votes. After the election, we'll go back to these responses to focus in on how those who are changing their intentions actually do vote, or if they vote at all.