The Future of Blackwater and Other Guns for Hire 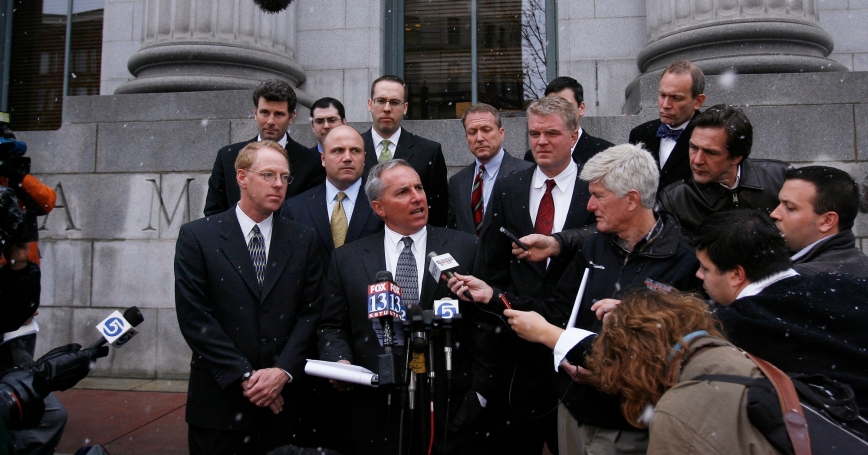 Mark Hulkower and fellow defense attorneys speak to members of the media outside of the U.S. District Court after five Blackwater security guards were charged with killing 14 unarmed civilians and wounding 20 others in a 2007 shooting in Baghdad

Paying for a soldier's health care and retirement pension is far more costly than hiring contractors, even at exorbitant rates.

The number of contractors on the battlefield has steadily grown over the past three decades, since modern mercenaries first made their appearance during the Balkan stabilization and reconstruction operations of the 1990s. Contractors have been employed in the trouble spots of Africa, hired to spray coca crops in Colombia, and finally enlisted in vast numbers to provide security, intelligence, training and other essential services during the wars in Iraq and Afghanistan. By 2011, private contractors supporting operations in those two countries constituted over 50% of the total force, up from a ratio of 1 contractor for every 50 uniformed personnel in the Balkans. The story of how private military security companies came to play a pivotal role in wartime operations is an important one, and Ann Hagedorn, a former reporter for the Journal, was right to take it on.

The first half of Ms. Hagedorn's book traces the rise of private military security companies. For readers unfamiliar with the subject, her accounts of DynCorp, Blackwater and MPRI will be a useful introduction to the new way of war. She doesn't shy away from wayward contractor behavior, such as the alleged sex-slave trade operated by DynCorp contractors in Bosnia and a litany of escapades by foreign mercenary outfits in Africa. She dwells on the story of U.S. Special Forces Sgt. Kadhim Alkanani, who was shot in June 2005 at a Baghdad checkpoint manned by Aegis contractors, a firm founded in 2002 by former British army officer Tim Spicer. When Mr. Alkanani was shot, he was returning from an intelligence mission in a convoy of three sedans packed with intelligence operatives, though he was the only Arab in his car. Mr. Alkanani's story is particularly tragic because justice was never served: He tried to sue Aegis, but U.S. courts declined to prosecute the U.K.-based company.

The crowning tale here is Ms. Hagedorn's retelling of the infamous Nisour Square shooting spree in Baghdad in 2007 by Blackwater operatives, which left 17 Iraqi civilians dead. Blackwater, the firm whose tasks included providing security for top American diplomats in Iraq, was eventually pushed out of the country. (On Wednesday, four of the Blackwater employees involved in the Nisour Square incident were found guilty: one of first-degree murder and three of voluntary manslaughter.) Ms. Hagedorn's theme is clear: Contractors are evil profiteers in cahoots with unscrupulous government officials.

Yet these chapters come across as more than a bit sensationalist. Blackwater certainly had a reputation for aggressive tactics in Iraq: As Ms. Hagedorn reports, its contractors fired first in 84% of the shooting incidents that occurred while it was providing security to U.S. government personnel. These incidents occurred at a rate of 1.4 a week between 2005 and 2007. But Blackwater founder Erik Prince offered another statistic in his October 2007 congressional testimony: Of 6,500 missions conducted in Iraq in 2006, fewer than 1% involved shots fired, and none of the State Department's protectees was ever harmed while under Blackwater's watch.

In the second half of the book, the author finally begins grappling with the real issues—namely, the forces that are driving the military contracting business and what can be done to make it more transparent and contractors more accountable. Since the end of the Cold War, the U.S. military has shrunk dramatically, and the government has outsourced more and more functions to the private sector.

As the U.S. military was drawing down in Iraq in 2010, for example, the missions for continued support to the Iraqi government were transferred to the U.S. Embassy, whose personnel were slated to balloon from 8,000 to 16,000. The State Department, having no troops of its own, awarded a $10 billion contract under its Worldwide Protective Services contract vehicle. Among the companies that won a piece of that contract were Aegis and International Development Solutions, a firm that had been recently purchased by Xe, the company formerly known as Blackwater.

This state of affairs is not a plot by contractors and their allies in government but a necessary response to the gap between continuing military and security missions and a lack of U.S. government capacity. There is also the financial logic: Paying for a soldier's lifetime health care and retirement pension is far more costly than hiring contractors, even at fairly exorbitant rates.

Given that the prospect for abolishing contractors is nil, Ms. Hagedorn's most interesting story concerns what the U.S. government and others are doing to remedy the lack of oversight and accountability. Mr. Spicer, the founder of Aegis and one of the key figures in the book, comes off as a villain-turned-reformer who believes that his industry must regulate itself to improve long-term business prospects. Still, he is never contrite about the efficacy of his chosen business. “You can't have huge standing armies. That is not efficient or economically feasible,” he says.

In the wake of bad publicity in Iraq and elsewhere, some congressmen sought to extend U.S. law to State Department contractors such as Blackwater. That bid failed, but Ms. Hagedorn recounts several key international initiatives spearheaded by the Geneva Centre for the Democratic Control of Armed Forces that may help rein in contracting excesses. In September 2008, one year after the Nisour Square shooting, officials from the U.S. and 16 other countries gathered to sign the Montreux Document, which set standards for the private military security companies they would hire. Now the U.S. will only hire companies that have promised to “comply with international humanitarian law or human rights law imposed . . . by applicable national law,” among other obligations. In 2010, a second important document, the International Code of Conduct for Private Security Service Providers, called on private military security companies to pledge to uphold certain standards of behavior, transparency and accountability. As of 2013, over 700 companies have signed the accord.

Ms. Hagedorn doesn't report on the degree to which those pledges are being observed, but the existence of a standard is a good start.

Linda Robinson, a senior analyst at the RAND Corporation, is the author of One Hundred Victories: Special Ops and the Future of American Warfare.

This commentary originally appeared on The Wall Street Journal on October 23, 2014. Commentary gives RAND researchers a platform to convey insights based on their professional expertise and often on their peer-reviewed research and analysis.