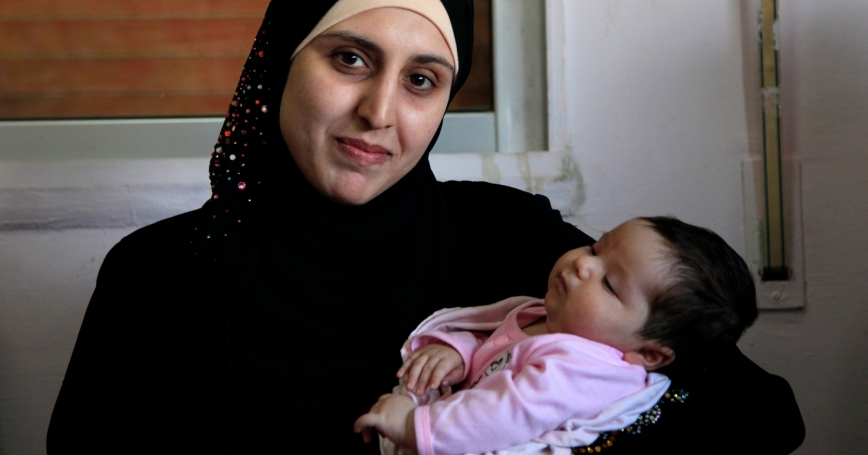 A Syrian refugee and her newborn baby at a clinic in Ramtha, Jordan

Photo by Russell Watkins/Department for International Development CC by 2.0

The Syrian conflict, now in its fourth year, has been the main contributor to the largest refugee crisis since the 1994 Rwandan genocide—and the problem can be expected to get worse as the fighting continues. By the end of 2013, international aid officials estimate, there were more than 33.3 million internally displaced people (PDF) around the world, 6.5 million of them in Syria. In addition, more than 2.6 million Syrians have fled across borders to Jordan, Lebanon, and Turkey.

The Za'atari Refugee Camp in Jordan, under joint administration by the Jordanian government and the UN Refugee Agency (UNHCR), first opened its doors to Syrian refugees in July 2012. Since then, it has become one of the world's largest such facilities, now housing close to 80,000 Syrian refugees. Since August 2014, UNHCR estimates the total number of Syrian refugees in Jordan to exceed 600,000; 70 percent of the refugees are women and children, and a quarter of those are of reproductive age. Further, roughly 80 percent of Syrian refugees (PDF) live in urban communities outside the Za'atari camp, including in Irbid, Ramtha, and Mafraq. While small steps are being taken to try to meet the needs of women refugees, more needs to be done.

Struggling with desperate conditions overall, aid officials are seeking to address the sexual and reproductive health of refugee women and girls. Those who register with the UN have access to services aimed at reducing newborn and maternal morbidity and mortality, curbing the spread of HIV and other sexually transmitted diseases, and managing the consequences of sexual violence, including rape. But unregistered women and girls cannot get these basic services. As the Syrian refugee population continues to grow in and around the Za'atari camp, demand for these services will rise.

The Inter-Agency Working Group on Reproductive Health in Crisis (IAWG), which developed MISP or Minimum Initial Service Package for Reproductive Health in Crisis Situations, recently evaluated (PDF) the situation in Jordan. They found that local aid providers had adequate understanding of MISP objectives but knew little of MISP's additional priorities, including meeting the demand for contraceptives, and the importance of treating sexually transmitted infections.

Implementation of the MISP standards within the camp in Jordan was satisfactory, IAWG found, though coordination was insufficient to meet the needs in urban settings outside the Za'atari camp. For instance, evaluators said there were programs to manage sexual violence but they were limited and the communities' knowledge of these services was low. The Syrian refugee women themselves told evaluators that they were afraid to use camp sanitary facilities at night because of inadequate lighting.

The sexual and gender-based violence sub-working group within UNHCR found that the vast majority, 83 percent, of reported problems with poor lighting and broken locks in the camp were in facilities for women. Poor lighting is associated with the threat of sexual violence. To reduce that threat, Max Holland, Ben Decker, and Elliot Talbert-Goldstein founded the Skyrocket Light Project. By successfully crowd-funding and forging partnerships with agencies in Jordan, and working with international and local partners including International Refugee Development (IRD), International Rescue Committee, and UNHCR, the project has begun to light up dangerous areas in the camp.

Thanks to newly installed solar lighting grids, three major community centers run by IRD are lit, outside and inside, 24 hours a day, according to Decker. The lighting also has allowed 43 child friendly spaces run by Save the Children to stay open late into the night, offering increased trauma counseling and other services. Early fears that the solar lighting would be vandalized or stolen have been unfounded, Decker reports, and the community has taken ownership of the installed lights and embraced the protection they provide.

The needs remain great in Za'atari and other facilities seeking to assist Syrian refugees, though regional conflicts and human tragedies around the world all compete for crowd-funding. It is difficult to keep global attention focused on the plight of one suffering group.

But the needs of Syrian refugee women in Jordan persist. They require better-coordinated services to address their sexual and reproductive health needs, especially women and girls residing outside the camp. They need access to free condoms in a culturally sensitive manner. And they need basic health services that include the provision of clinical care for sexual violence survivors.

The needs extend far beyond those in and around one refugee camp in Jordan. Lebanon is struggling with a Syrian refugee population estimated to exceed 1 million. Recent reports indicate that 170,000 Syrian Kurds are pouring over Turkey's borders to escape threats by the Islamic State. The global community needs to step up its humanitarian aid to protect the most vulnerable groups in this population.

Mahlet Woldetsadik is an assistant policy analyst at RAND and a Ph.D. candidate at the Pardee RAND Graduate School. This blog was written for the Pardee Initiative for Global Human Progress.