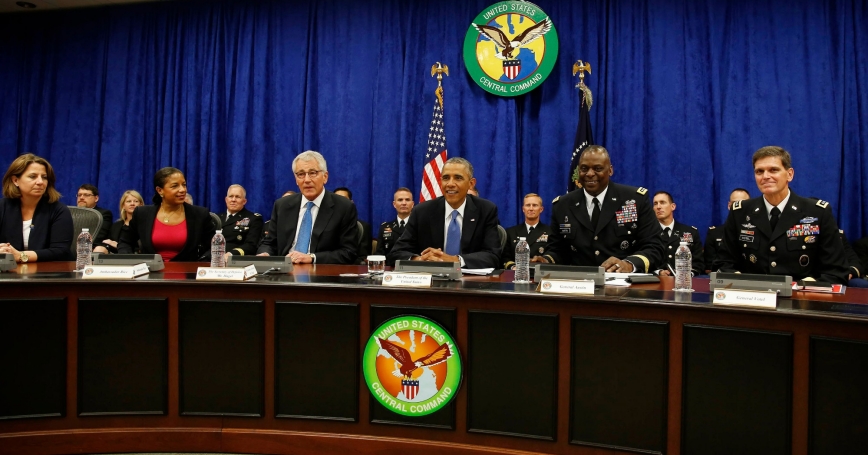 Problems abound across the globe — the Islamic State group challenge in the Middle East, Iran's nuclear weapons program, Russia's threats to Ukraine and others along its periphery and China's outward encroachment on its neighbors and their territorial waters. And that's not all. The world is witnessing a highly disruptive form of geopolitics, one characterized by fundamental global changes of a nature not seen since the breakup of the Warsaw Pact and the collapse of the Soviet Union.

For decades American strategists have conceived of plans that would involve U.S. forces fighting in more than one theater at a time. This is often called the two-theater or two-war strategy. It has come in many forms over the years, the roots of which trace back to the Truman administration. Be it the ability to fight in Europe and Asia, or later in Europe and the Middle East or later still in the Middle East and Asia, American strategists have long thought in terms of two. Even the Obama administration’s focus on the pivot to Asia still had strategists thinking in terms of Asia and the Middle East.

The time has come to question these assumptions. Areas that have long been a focal point for defense planning — Europe, the Middle East and East Asia — are all facing profound and unsettling change, and the United States may no longer have the luxury of choosing among regions.

Europe, the region most had assumed to be stable and secure, is now neither. Russia seems intent on asserting itself and reclaiming lost ground — quite literally. Whether Russia has the wherewithal to achieve its objectives over the longer term remains to be seen. In the near term, there is no question that Russia is a highly disruptive force.

The East Asia security situation is changing more rapidly than most predicted. Many saw China as a challenge that would unfold over a 20- or 30-year timespan. But the challenge, particularly that posed by Chinese military forces, is now quite immediate. The good news is that America's allies in the region are seeking to intensify their relationships with the United States now more than ever. The bad news is that America's allies are questioning whether the United States is up to the challenge. The Obama administration's pivot was welcome news when it was rolled out several years ago, but most in the region are still waiting to see whether rhetoric will be matched by action.

Perhaps the most vexing challenge is in the Middle East. America's most trusted relationships in Europe and Asia are based on strong cultural ties, highly intertwined economic relationships, and a shared desire to counterbalance security threats posed within and beyond the regions. U.S. relationships in the Middle East have few of these ingredients. With the exception of its relationship with Israel, most of America's cultural ties are weak and fraying, its economic linkages are softening; and there is no shared outlook concerning the dominant security challenges.

The threat posed by the Islamic State group has prompted a set of expedient responses. President Barack Obama has assembled a coalition of regional partners to confront the Islamic State group in Iraq and Syria. Success will take time and is hardly assured. Concerns about Iran's nuclear program provide another rallying force, though the region remains divided on how to contend with it. Moreover, the United States is a long way from settling on a long-term military posture for the region, though most would agree that a continuing presence in the region is necessary. And, as with the other regions, the United States cannot assume the Middle East posture it has now is the one it will need in a decade.

None of these three regions can be taken for granted or escape America's attention; the United States no longer has the luxury to shift from Europe or the Middle East to Asia. It needs to move beyond the language of pivoting from one area to another. The United States needs to support long-standing — and evolving — security commitments in all three regions. Added to this, American strategists will have to anticipate the demand for counterterrorist operations across multiple regions.

All of this gives way to thinking differently about the United States' security role in the world. At a time when allies and partners in Europe, East Asia and the Middle East are looking to the U.S. for leadership and commitment, strategists need to think differently about the world and the old rule of two. It also means the era of doing more with less is over. Further cuts to the national security accounts no longer make sense.

What this means for U.S. forces is still to be worked out. The problems are so different, it is clear that no single answer or solution will suffice. In the world of assigning missions, there is more than enough to do for everyone involved — and then some. Consider this an inflection point for American strategy.

Andrew Hoehn is senior vice president for research and analysis at the nonprofit, nonpartisan RAND Corporation.

This commentary originally appeared on U.S. News & World Report on October 7, 2014. Commentary gives RAND researchers a platform to convey insights based on their professional expertise and often on their peer-reviewed research and analysis.